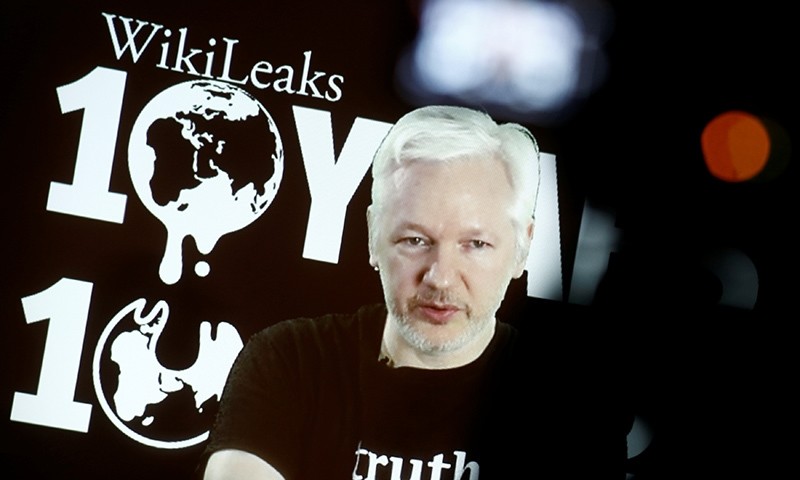 Julian Assange, Founder and Editor-in-Chief of WikiLeaks speaks via video link during a press conference on the occasion of the ten year anniversary celebration of WikiLeaks (Reuters Photo)
by Oct 04, 2016 12:00 am

WikiLeaks founder Julian Assange vowed Tuesday to publish new "significant" documents related to the US presidential elections ahead of the November 8 vote, as the online leaking platform celebrated its 10th birthday in defiant mood.

Taking aim at critics accusing him and his organisation of manipulation, Assange pledged he would not be muzzled as he sought to raise "an army" of supporters to join in the defence of WikiLeaks.

"We hope to be publishing every week for the next 10 weeks. We have on schedule... all the US election related documents to come out before November 8," Assange, wearing a black T-shirt bearing the word "Truth", told journalists via webcast from the Ecuadoran embassy in London where he has been holed up since 2012.

He refused to reveal if the US-vote related documents would hurt Democrat candidate Hillary Clinton or target her Republican rival Donald Trump.

But the white-haired WikiLeaks founder described the material as "significant" with "a lot of fascinating angles".

"Do they show interesting features on power factions and how they operate? Yes they do," he said.

Ten years after it was founded, Wikileaks has faced growing charges that it is manipulated by politicians - either by recycling documents provided by Moscow, or by allegedly serving the interests of Trump in the US presidential election race.

And Assange himself took refuge in the Ecuador embassy to avoid extradition to Sweden where he is accused of raping a woman while she was asleep.

The 45-year-old has always maintained the allegations are false and has refused to travel to Stockholm for questioning due to concerns that Sweden will hand him over to the US to stand trial for espionage.

He has come under fresh pressure after WikiLeaks published some 20,000 internal emails on the eve of the US Democratic Party convention that forced top party officials to quit.

Assange charged that WikiLeaks was now the target of a witch hunt orchestrated in particular by Clinton, likening it to the repression of American communists in the 1950s driven by then senator Joseph McCarthy.

But he said he would not back down.

Rather, WikiLeaks will scale up operations to "amplify our publications and to defend us against what is really a quite remarkable McCarthyist push in the United States at the moment, principally by Hillary Clinton and her allies because she happens to be the person being exposed at the moment," he said.

The domain name wikileaks.org was registered in 2006 and launched in January 2007, with Assange saying it would use encryption and a censorship-proof website to protect sources and publicise secret information.

The site has since published more than 10 million leaked documents.

It first caught the world's attention when it released manuals for US prison guards at Guantanamo Bay.

But it really hit its stride in 2010, unveiling logs of US military operations in Iraq and Afghanistan and a video showing a US helicopter crew mowing down a group of unarmed civilians - including two journalists - in Baghdad.

That same year it also published a cache of diplomatic cables from US embassies around the world, deeply embarrassing Washington.

But Assange's abrasive style and insistence on publishing unredacted documents quickly grated on colleagues and journalists who worked with him.

"If an Afghan civilian helps coalition forces, he deserves to die," Guardian journalist Nick Davies later recalled Assange saying in an argument over whether to remove names from the war logs.

Top US government officials have called him a security threat.

Assange pledged to expand WikiLeaks' activities through extra staff and new media partnerships, with plans to employ 100 more journalists over the next three years.

"We're going to need... an army to defend us from the pressure that is already starting to arrive," he said, adding that "we will give if necessary a call to arms if pressure increases more than it already has."

And even if he were forced to resign one day, "the publication will continue," pledged Assange, who had cancelled at the last minute what would have been a rare public appearance Tuesday on the balcony of his 18-square-metre room in the Ecuadorean embassy, citing security reasons.