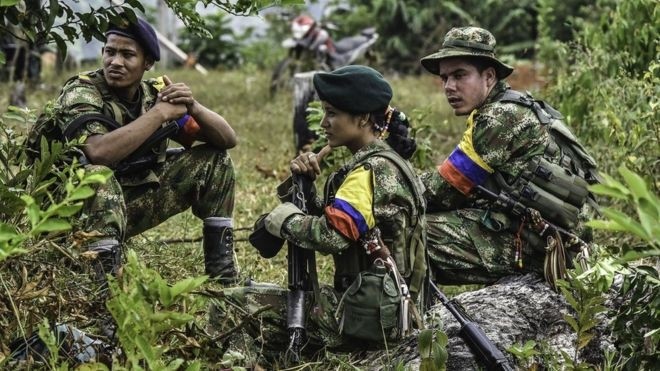 Political uncertainty continued to hang over Columbia on Tuesday after voters rejected a signed peace deal between the FARC and government that would've ended the longest war in the Western hemisphere.

"In the best-case scenario, the parties will agree quickly on a new agenda, taking into account the concerns of Colombia's political right, with a clear timetable," Adam Isaacson, Regional Security Policy Program chief at the Washington Office on Latin America, said in a statement to Anadolu Agency on Tuesday.

The Democratic Centre party led the effort to reject the deal it believed gave too much to the guerrillas. If, as feared, negotiations between President Juan Manuel Santos and members of the party is prolonged, there are several ominous possibilities that could occur, according to Isacson.

Since the referendum was rejected, FARC guerrillas are "technically fugitives," and their transfer to the 28 zones of concentration for 180 days and disarmament observed by the UN is now on hold, according to Isacson. "Without verification and concentration, the cease-fire may become unstable," he said. And if these guerrillas, mainly middle and low-ranking members, feel that the government will not keep its end of the deal, then there is the possibility of a "disintegration of the FARC into structures that would be impossible to demobilize."

The FARC has said the signed agreement is binding.

The group's legal advisor Enrique Santiago Romero told a local radio station that he is not against some changes to the deal.

"It will not be a simple task, but I would be open to modifying some points so as to address the issue of impunity," he said.

The victims of the 52-year armed conflict -- who, for the first time had had their voices heard in peace talks -- are inconsolable and bereft of hope after the voting Sunday swung in favor of the "No" campaign by just 60,000 votes.

"We feel that the urban population doesn't understand the reality and the needs to end this conflict. It was a huge opportunity for us and we missed it," Leyner Palacios told Blu Radio. Palacios managed to survived the May 2002 massacre in which 119 victims lost their lives when a FARC cylinder bomb landed on a church where civilians found shelter during a battle between guerrillas and the right-wing paramilitary United Defense Forces of Colombia.

The peace dialogues with the FARC began in earnest in October 2011 in Cuba to bring an end to the 52-year conflict that has killed an estimated 250,000 victims and displaced more than 5 million others.