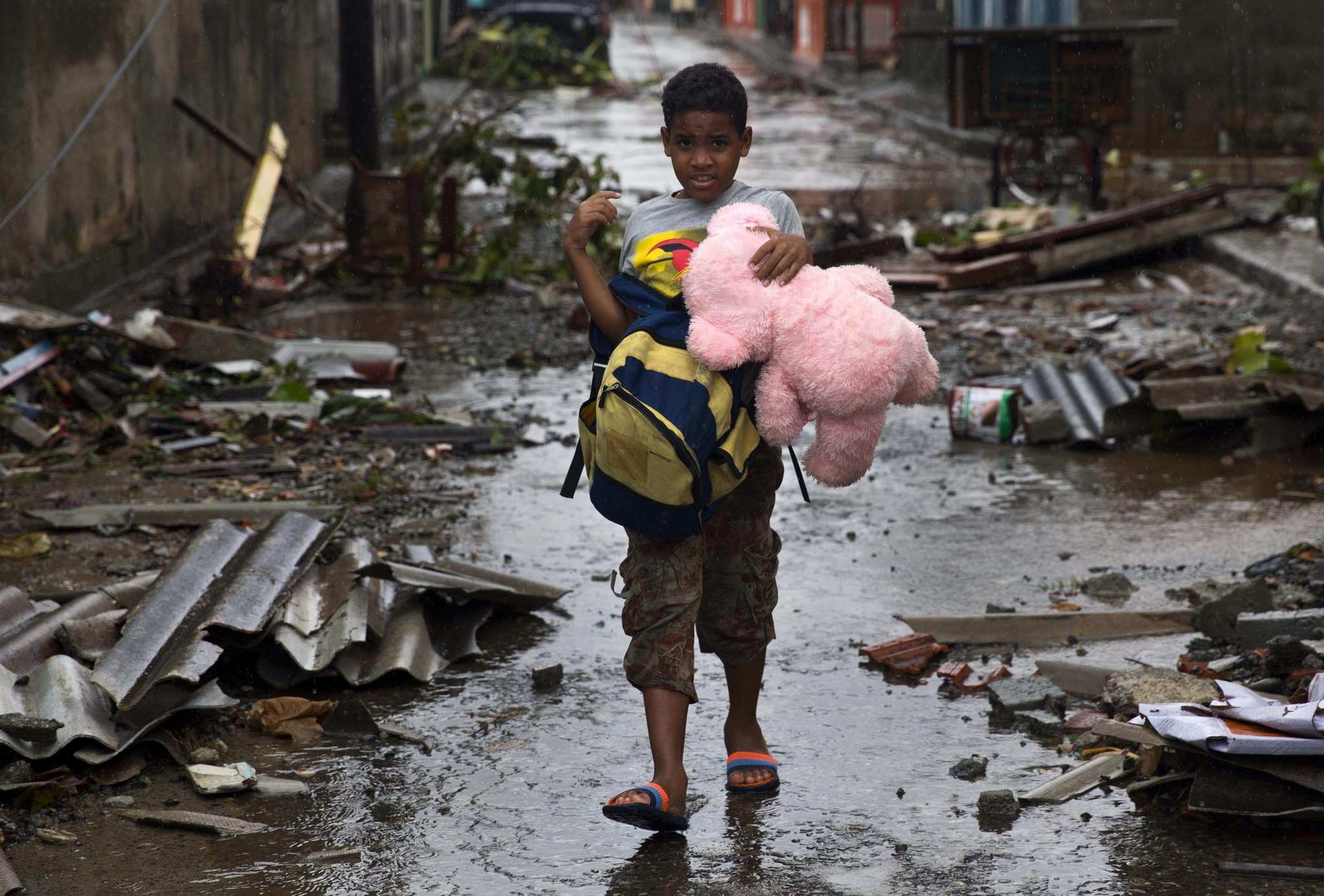 A boy walks, carrying a backpack and a teddy bear, through a street littered with debris the morning after Hurricane Matthew drove across Baracoa, Cuba, Wednesday, Oct. 5, 2016. (AP Photo)
by Oct 05, 2016 12:00 am

South Carolina Governor Nikkei Haley on Tuesday ordered the evacuation of more than 1 million people starting from Wednesday afternoon and declared a state of emergency as did the governors in Georgia, South Carolina and North Carolina.

Hurricane Matthew churned toward the Bahamas and Florida's east coast on Wednesday after killing at least 21 people in Haiti and prompting the hard-hit country to postpone a long-awaited presidential election.

The hurricane, the fiercest Caribbean storm in nearly a decade, whipped Cuba and Haiti with 140 mile-per-hour (230 kph) winds and torrential rains on Tuesday, pummeling towns and destroying livestock, crops and homes.

In the United States, millions of people were urged to evacuate the southeastern coast and Florida Governor Rick Scott warned residents to prepare for a possible direct hit that could be catastrophic.

Hundreds of thousands of people had been evacuated from the path of the Matthew, which caused severe flooding and killed four people in the Dominican Republic as well as at least 21 in Haiti. The two countries share the island of Hispaniola.

The storm carved a path of devastation through western Haiti, dumping boats and debris on coastal roads hit by surging seas and heavily flooding residential areas.

Haiti, the poorest country in the Americas, had been set to hold a repeatedly-postponed presidential election on Sunday, but the country's electoral council delayed it again in the aftermath of Matthew. No new date has yet been set.

Matthew was a Category 4 hurricane through Tuesday but was downgraded to still powerful Category 3 early on Wednesday, the U.S. National Hurricane Center (NHC) said.

The storm had sustained winds of about 120 miles per hour (195 kph) on Wednesday afternoon but the NHC said it could strengthen over warm waters as it approaches Florida.

The eye of the storm was about 70 miles (113 km) south of Long Island in the Bahamas at 2 p.m. EST (1800 GMT) and was expected to be very near the east coast of Florida by Thursday evening, the NHC said.

"Everyone in our state must prepare now for a direct hit," Florida Governor Scott told a news conference in Tallahassee. "If Matthew directly impacts Florida, the destruction could be catastrophic and you need to be prepared."

It was difficult to assess the full extent of Matthew's impact in Haiti because it knocked out communications in many of the worst-affected areas, including the main bridge that links much of the country to the southwest peninsula.

Haiti was a particular concern because it is prone to mudslides due to extensive deforestation and tens of thousands of people are still living in tents and makeshift dwellings after the 2010 earthquake that killed more than 200,000 people.

The death toll in Haiti included at least eight people killed by falling trees and six others swept away by swollen rivers, authorities said.

Mourad Wahba, the U.N. secretary-general's deputy special representative for Haiti, said much of the population had been displaced by Matthew and at least 14,000 were in shelter.

The storm had triggered "the largest humanitarian event" witnessed in Haiti since the 2010 quake, he said.

The U.S. government said it was ready to help the afflicted and about 300 U.S. Marines set off on the USS Mesa Verde to provide disaster relief in Haiti, the Marines said in a tweet.

There were no immediate reports of deaths in Cuba, but Matthew devastated the picture-postcard tourist town of Baracoa, Cuba's oldest colonial settlement, in the province of Guantanamo. It gutted many houses there, dumping hunks of cement, wooden beams, roof tiles and fallen electrical lines on the streets.

The storm passed close to the disputed U.S. Naval base and military prison in Guantanamo and was on track to mow over the central and northwestern Bahamas, the NHC forecasts showed.

Officials in the Bahamas urged residents to evacuate to higher ground and the Ministry for Grand Bahama said on Facebook that government offices in New Providence and Grand Bahama were closed until further notice.

Hurricane and tropical storm warnings have been extended along a large stretch of Florida's east coast ahead of Matthew's forecast arrival there on Thursday.

Tropical storm or hurricane conditions could affect parts of Georgia, South Carolina, and North Carolina later this week, even if the center of Matthew remained offshore, the NHC said.