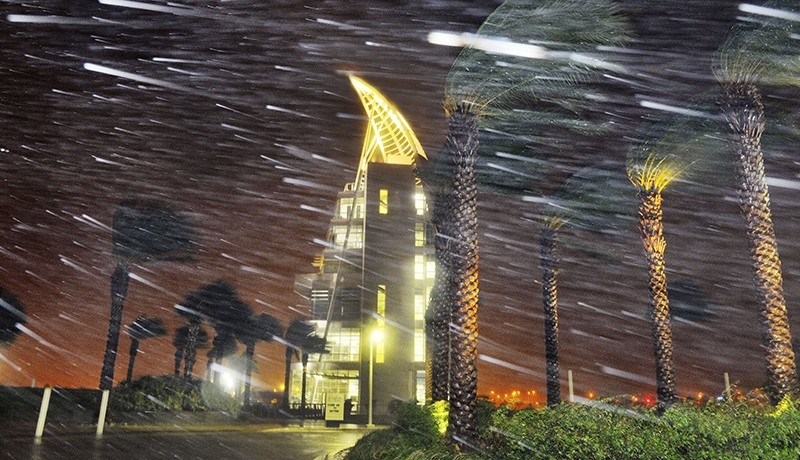 Mandatory evacuation orders had been issued for 90,000 people living on barrier islands and in mobile homes and low-lying areas. Waters says some residents who refused to leave now find themselves cut off as they face the worst of the hurricane.

He says a family called in that the roof "just flew off their home on Merritt Island."

Waters says people will just have to stay put for now and do the best they can until conditions improve and paramedics and firefighters can be dispatched to help them. He spoke by phone from the county's emergency operations center, which was running a backup generator because it had lost electricity.

Along with the power outages, the water supply to the barrier islands was cut off to avoid compounding the storm flooding if the system got damaged.

Waters says he has talked to other families who have said things like, "We're scared. We wish we hadn't stayed."

More than 360,000 in Florida are without power Friday morning.

A Florida resident, Robert Tyler had feared a storm surge flooding his street, which is only two blocks from the Cape Canaveral beach.

But he and his wife, Georgette, felt fortunate Friday morning when they looked out the front door of their one-story cinder block apartment to see that there wasn't much water.

Tree branches littered the road and he could hear the transformers blowing up overnight. But his home didn't appear to have damage on first inspection and his vehicles were unharmed.

He says it was "scary as heck" overnight, adding that at one point "it felt like the windows were going to blow even though they all were covered with plywood."

In the end, he says he's just "glad we didn't hear the ocean coming down our street."