'No' vote not to turn down peace in Colombia, says expert 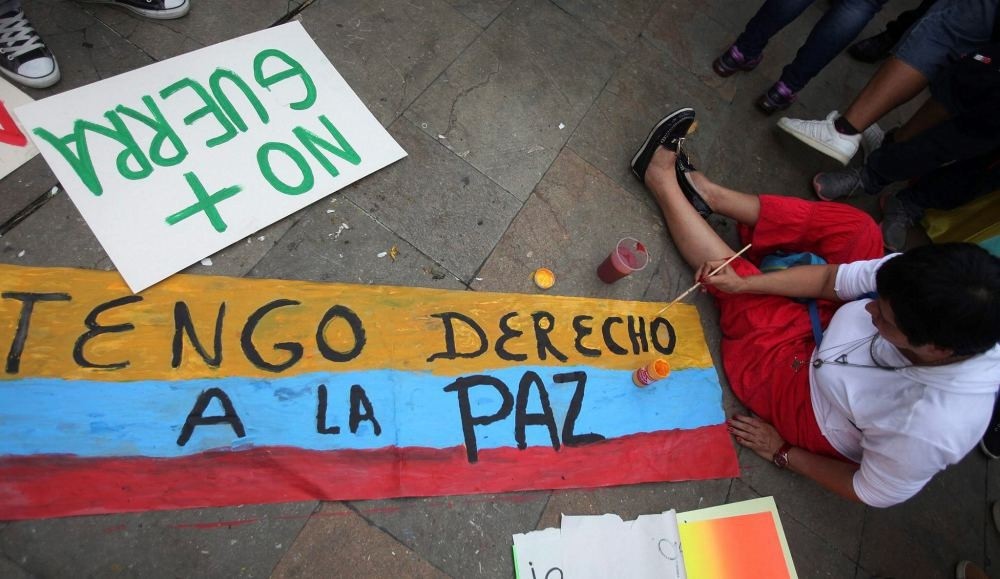 Demonstrators create banners during the 'Rally for Peace' through the main streets of Medellin, Colombia, Oct. 7.
by Yusuf Selman İnanç Oct 10, 2016 12:00 am

In an interview with Daily Sabah, associate professor Mehmet Özkan, who lives in Colombia, said the referendum results do not show that people are against peace but indicates they are worried how the peace process will be implemented and maintained

It was disappointing for millions of Colombians to hear that the "No" votes exceeded the "Yes" votes. Millions have taken to the streets to save the peace process, chanting they will not let the peace fail and go back to clashes. Colombians apparently are exhausted with the war that has killed around 300,000, left 45,000 missing and displaced 7 million. The world, including the U.S., EU and Turkey has pledged support for peace as the region undergoes a significant change in terms of opening its economy to the world, as Cuba, which has re-established its relations with the U.S. after four decades, is the salient example. Therefore, the Nobel Prize has been given to the Colombian President Juan Manuel Santos, despite the NO vote in the referendum. Daily Sabah conducted an interview via email with Mehmet Özkan, an associate professor at the Turkish National Police Academy who lives in Colombia, about the effects of the referendum on Colombia's peace process and on the daily lives of Colombians.

What do you think is the main motivation behind the 'No' result?

Let me say that the results were unexpected for many in Colombia. However, the low turnout and climate conditions on the same day of the plebiscite may have contributed to the result. If we look at the overall picture, many areas affected by the conflict voted yes. This is a big achievement toward peace in Colombia. People for the first time started to believe sincerely that peace is not far away.

How do you think the result will affect the peace process?

The country has been sharply polarized when the results are taken into consideration. The NO result neither means that clashes will restart nor that Colombians are against peace. On the contrary, it must be stated that as a result of several different political, conjectural and social dynamics that have been coincided the country is now in a state of limbo. Campaigners of both the supporting and opposing sides are continuing talks to take the country out of the uncertain situation. People pledged their support for peace by organizing marches. Despite the opposing votes, there is an apparent social pressure for peace. I believe that a political compromise can be reached at the end of this process since any side that gives up on the talks will lose its credibility in the eyes of Colombians.

As you have been living in Colombia, can you please tell us how daily life is and what the people's reactions are?

First of all, it must be said that everybody wants peace and is fed up with the conflicts. Colombians do not want to be pronounced with Pablo Escobar (drug smuggler who was killed in 1993 after years of clashes), FARC, ELN and other narco-traffic groups. People are bored with security checks, restriction on travel rights and being asked about their personal information. The main dispute is about the method for implementing and maintaining the peace in the future. Some people are upset with the no votes as those who voted in favor live in the countryside where clashes have intensified. The impact of the war between FARC and the government on the locals is not so acutely felt in the city centers. That is why people from rural areas have voted in favor. What makes people believe in peace is that the problem has already been contained.

Is it true that the government as well as poll companies have ignored the opinions of the people living in rural areas?

The results of the polls have varied, depending on the province in which the polls were conducted. Moreover, speculations have indicated that diligence in the poll system needs further development. It is difficult to say that the polls included the opinions of people living in the countryside. It also has to be considered that many people were not telling their real opinions due to political polarization. Many people might have said they were going to vote yes but voted no --or vice versa -- since people in some provinces thought that declaring what their vote would cost them. I believe the poll companies and even the government did not consider people would conceal their opinion due to fear.

How do you think this result will affect the region? Is it a bad example for other unending conflicts?

This result is not expected to have a negative effect on the region. Venezuela and Ecuador support peace. Colombia is in favor of becoming the shining star of Latin America, and the West supports that. As the domination of leftist policies are coming to an end and liberal values are promoted in the region, Colombia is considered to have the potential to become an example in terms of solving internal problems and improving the economy in rural areas. The West's overwhelming support for peace in Colombia while remaining silent against massacres in Syria can be understood in this regard.

Do you see any similarity between Turkey's war on the PKK and the conflict between FARC and the Colombian government?

The reasons and results of the two conflicts are quite different. But the process in Colombia tells the world two important things. The first one is that initiating and maintaining a peace process becomes possible after weakening the terror organization. Otherwise, the process is likely to collapse. The peace processes between 1998 and 2002 and the one initiated after 2012 have proved this. If the Colombian army had not weakened FARC militarily between 2002 and 2010, it would not have been possible to talk about peace today. The second thing is that peace is impossible as long as external factors, like other states, do not cut their support for the terror organization. Colombia's talks with Ecuador, Venezuela and Cuba to withdraw their support made a huge contribution to the process. If those countries had continued supporting FARC and block peace efforts, the process would not have got to this point.

Does Turkey have a role in Colombia contributing to the process?

Turkey supports the peace process in Colombia. The Turkish Foreign Ministry has made statements, saying that Turkey was in favor of peace. The state-run Turkish International Cooperation and Coordination Agency (TIKA) carries out projects in Colombia and uses Bogota as a center for its projects across the Latin America. It has been supporting projects for re-structuring Colombia. For instance, TIKA has started building a school in Orejen, which has been selected as a pilot region for the peace process. This project was put into effect after the Colombian officials made a request from the Turkish President Recep Tayyip Erdoğan. Turkey has been providing scholarships to as many as 100 Colombian students studying in Turkey. The state-run Anadolu Agency (AA) has a correspondent in Colombia. Turkey goes beyond the peace process and attempts to strengthen its relations with the region.
RELATED TOPICS