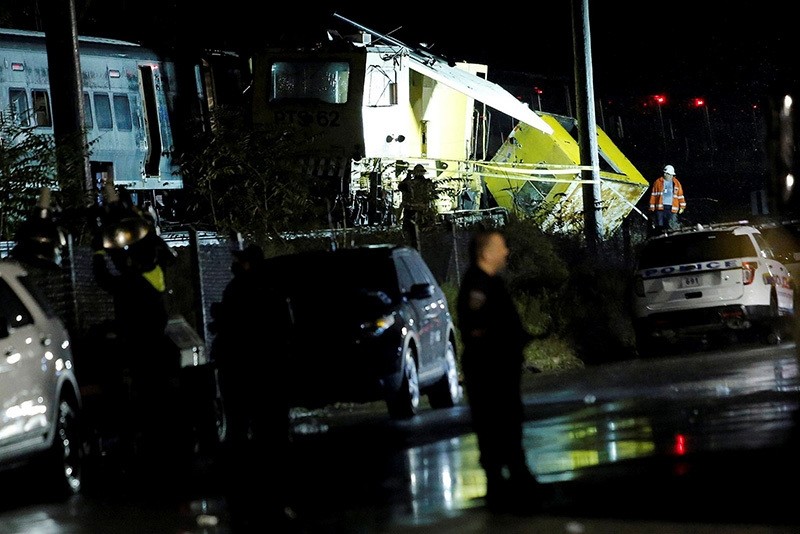 A Long Island Rail Road passenger train derailed on Saturday near the community of New Hyde Park, New York, injuring at least 33 people and halting service on the key transit line in both directions, railroad officials and police said.

Official details were not available on the precise circumstances of the incident, which occurred at about 9 p.m. local time (0100 GMT) when a passenger train struck a work train about 20 miles (32 km) east of Manhattan, according to police.

It was not immediately clear if the work train was stationary at the time.

Nassau County Executive Ed Mangano told a news conference 29 people were treated in hospitals for non-life threatening injuries such as broken bones and concussions. Scores more were evaluated or treated at the scene for scrapes or bruises.

An earlier statement from New York Governor Andrew Cuomo, citing "early reports," put the number of injuries at 11, "none of which are considered to be serious."

According to Cuomo, the 12-car train was heading eastbound on the railroad's main line carrying about 600 passengers when the first three cars derailed a half mile east of the New Hyde Park Station.

Photos from the scene of the wreck posted on social media showed at least two of the derailed train cars leaning upright but askew and partly off the track.

People riding on the train told local media they saw sparks or fire outside the windows after the train, which had been moving at a normal speed, began shaking mildly, then more violently before striking something and coming to a halt.

The New Hyde Park stop is just east of the border with the New York City borough of Queens. The rail line, one of the busiest commuter routes into America's largest city, said the derailment had forced suspension of service in both directions.

Saturday's accident on Long Island comes nine days after a passenger train crashed into a terminal in Hoboken, New Jersey, a major commuter route from New York City's western suburbs. That crash killed one person and injured more than 100.