Trump threatens to imprison Clinton in 2nd round of debate 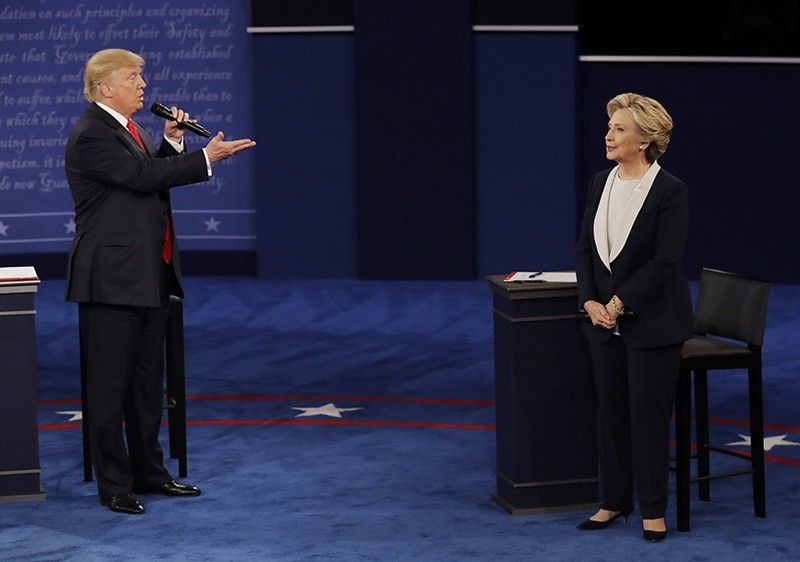 A chorus of critics painted Donald Trump as a dictator in the making Sunday, after he threatened to imprison Hillary Clinton if he wins the White House.

Trump was called "dangerous," "unfit" to be president and drew a series of unfavorable comparisons to Venezuela and Russia after he told his rival he would have her jailed if he were victorious in November.

"If I win, I'm going to instruct the attorney general to get a special prosecutor to look into your situation because there's never been so many lies, so much deception," the Republican told his Democratic rival during their second presidential debate.

He was referring to Clinton's use of a private email server while secretary of state, which the Federal Bureau of Investigation has looked into and declined to prosecute.

When Clinton said that it was "awfully good" that someone with Trump's temperament was "not in charge of the law of our country," he shot back: "Because you'd be in jail."

The two candidates avoided shaking hands as they walked onto the debate stage in St Louis, Missouri, and immediately launched into harsh personal attacks.

One of the debate moderators, CNN news anchor Anderson Cooper, told Trump: "You bragged that you have sexually assaulted women."

"I didn't say that at all," Trump said, before changing the topic to Daish terrorist group.

"Yes, I'm very embarassed by it. I hate it, but it's locker room talk, and it's one of those things. I will knock the hell out of Daish. We're gonna defeat Daish. ... We should get on to much more important things."

Pressed by Cooper - "Have you ever done those things?" - Trump replied: "No, I have not."

Since Friday, dozens of prominent Republicans, including some of the conservative party's top members of Congress, have repudiated Trump over the video. Many have withdrawn their support for him as the Republican nominee.

"What we all saw and heard on Friday was Donald talking about women: what he thinks about women, what he does to women," Clinton said.

"He has said that the video doesn't represent who he is. But I think it's clear to anyone who heard it that it represents exactly who he is."

She sought to exploit the widening rift between Trump and the party whose nomination he won as an outsider candidate.

"With prior Republican nominees for president, I disagreed with them on politics, policies, principles, but I never questioned their fitness to serve," Clinton said.

"Donald Trump is different. I said, starting back in June, that he was not fit to be president and commander in chief, and many Republicans and independents have said the same thing."

A new survey by ABC News and polling company SSRS, released Sunday before the debate, found since the release of the lewd video on Friday that 43 per cent of respondents said Trump should quit the race, while 57 per cent said Trump should stay in the race.

Trump has refused to release his tax returns, which has been customary among presidential nominees for decades, but in the debate he admitted using legal write-offs to avoid paying taxes after a 1995 business loss.

He blamed Clinton for advocating for tax loopholes that benefit the wealthy.

"The people who give her all this money - they want it," he said.

He seemed to back down from a blanket ban on Muslim immigration, as he previously advocated, instead calling for "extreme vetting" of those seeking to enter the United States.

She called for compassion for refugees from Syria: "There are children suffering in this catastrophic war, largely because of Russian aggression."

Clinton said it was "good that someone with the temperament of Donald Trump is not in charge of the law in our country."

"Because you'd be in jail," he shot back, and went on to attack her use of a private email server while secretary of state from 2009-13.

Clinton repeated that it was a mistake for her to use the email server.

During the debate, Trump tried to contrast his dirty talk about women with the sex scandals of Clinton's husband, former president Bill Clinton.

"If you look at Bill Clinton, mine were words and his was action," Trump said, accusing Hillary of attacking the same women.

Earlier Sunday, Trump held a press conference with four women who described their personal grievances with the Clintons, including three who made previous allegations of sexual assault or harassment against Bill Clinton.

One of the women, Juanita Broaddrick, accuses ex-president Bill Clinton of a 1978 attack.

"Mr Trump may have said some bad words, but Bill Clinton raped me, and Hillary Clinton threatened me," Broaddrick alleged. "I don't think there's any comparison."