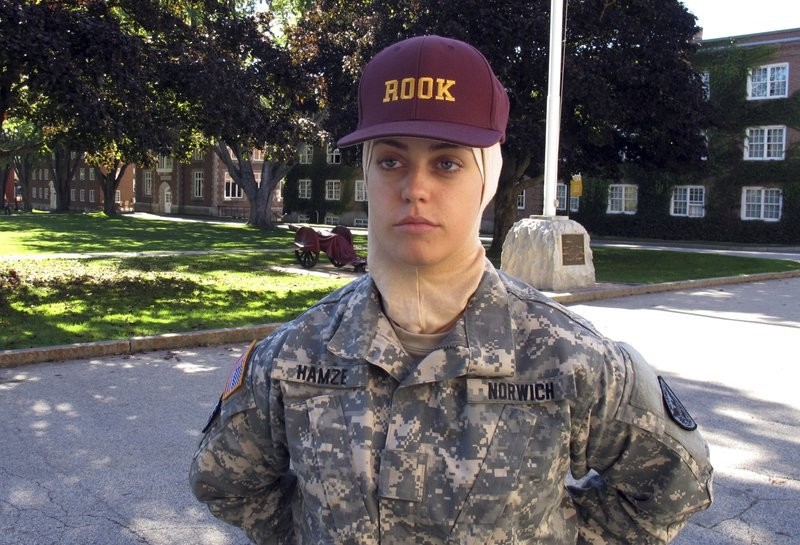 Freshman student Sana Hamze poses in Northfield, Vt., during an interview about her time as a ,rook,, or first year student in the military college's Corps of Cadets. (AP Photo)
by Compiled from Wire Services Oct 16, 2016 12:00 am

A Muslim high school student from Florida have started her education at Norwich University to become a U.S. Navy officer after the Vermont military school said it would allow her to wear her headscarf beneath her uniform.

Sana Hamze's college plans made headlines this spring when The Citadel — the Charleston, South Carolina, military college the 18-year-old had hoped to attend — refused to change its uniform policy to accommodate her hijab. Norwich was quick to agree to make the accommodation, which will also apply to Jewish men who wish to wear a yarmulke along with their uniforms.

Despite being the first woman allowed to wear a Muslim headscarf beneath her military uniform at the college, Hamze says she doesn't feel like a pioneer. Her focus is on learning details of life as a "rook" at Norwich University, in the school's Corps of Cadets and not running afoul of the many rules and customs new students are required to master.

As do all aspiring members of the corps, she's learned to walk at the side of the pathways, make square corners when turning, line up before eating and sleep when she is told. Like her freshman classmates, she yearns for the time when her class is "recognized" and they become official members of the Corps of Cadets and the rook restrictions end.

As part of her effort to fulfill her lifelong dream of continuing her family's legacy of military and public service while staying true to her devout religious beliefs, she asked for a uniform accommodation to wear the hijab when she was applying to colleges earlier this year. Norwich, one of the nation's six senior military colleges, agreed to make the accommodation.

"I don't really see it as me changing the world or changing the U.S., even," she said during an interview on the Norwich parade ground. "I just kind of see it as the school allowing an American student to practice her faith while also training to be an officer in the Navy."

Hamze's great-grandmother was in the Air Force and two of her grandparents met while serving in the Navy in Puerto Rico. Her father is a police officer in Florida.

Hamze said that she has been subject to hostile stares and comments while wearing her hijab in public, but never at Norwich, where she is not the first Muslim to attend the school, or in Vermont. The hostility to her faith hasn't made her bitter or curbed her dream of serving her country.

Norwich, located in the town of Northfield, about 10 miles south of the Vermont capital of Montpelier, is the nation's oldest private military college. Last spring, it hosted a celebration of the 100th anniversary of the Reserve Officers Training Program.

Of its total on-campus student body of about 2,250, about two-thirds of students are in the Corps of Cadets, its military program, while the rest are civilians who don't participate in military training.

Ali Shahidy, a Muslim senior civilian student at Norwich from Afghanistan, said he had met Hamze and attended a religious service with her at a nearby mosque, but did not know her well. Nevertheless, he thinks she's a leader even if she doesn't see herself that way.

"I am definitely sure there will be students in the future like her (and) it will encourage other Muslim students who have the ambition to serve their country in the military yet are concerned about their look and their hijab," he said.