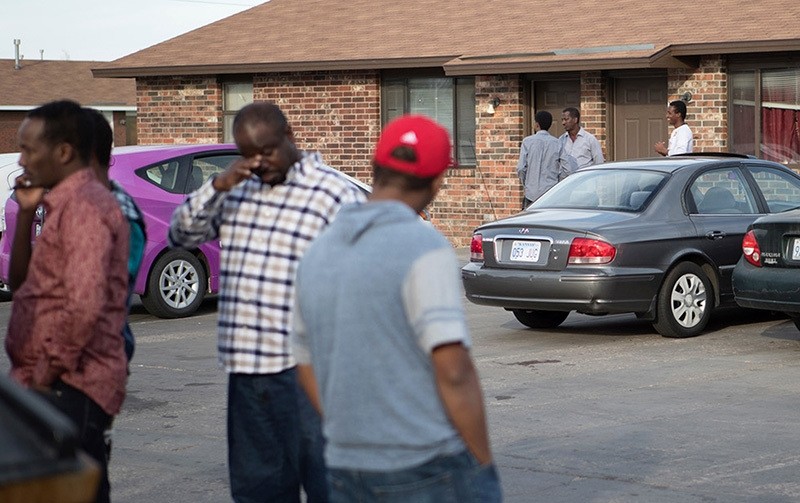 People stand outside an Islamic mosque located within an apartment complex, which federal authorities allege was to be targeted in a bomb plot by three Kansas men, is seen in Garden City, Kansas, U.S. October 14, 2016. (Reuters Photo)
by Associated Press Oct 18, 2016 12:00 am

Three men accused of plotting to attack Somali immigrants in western Kansas appeared in court Monday, where they were appointed lawyers and ordered to remain in custody for the time being.

The trio was charged in a criminal complaint unsealed Friday with conspiring to use a weapon of mass destruction. Their attorneys declined to comment after the brief hearing in Wichita.

Prosecutors say the men are members of a small militia group that calls itself "the Crusaders" and whose members espouse sovereign citizen, anti-government, anti-Muslim and anti-immigrant extremist beliefs.

They allege that the men planned to detonate truck bombs around a small Garden City apartment complex where about 120 Somali immigrants live and that they had discussed attacking area churches that helped settle the refugees and get them jobs.

Kansas Gov. Sam Brownback says the arrests of three men accused of plotting to attack Somali immigrants in the southwestern corner of his state shows that "no place is immune" from violence.

Brownback told reporters during a news conference: "This is sort of hate and violence doesn't have any place in this country, let alone our state."

He said the global conversation about refugees has been marked by "lots of sharp words."

Brownback continues to back GOP presidential nominee Donald Trump, who has called for strictly limiting Muslims from entering the U.S.

Brownback defended his April decision to withdraw from the federal government's refugee resettlement program. He repeated his argument that President Barack Obama's administration is not doing enough to ensure that potential terrorists are kept out of the country.

Stein's family issued a statement through attorney Dan Monnat, saying they are "extremely grateful" to law enforcement involved in the intervention of the alleged plot. The family also asked for privacy.

"The Stein family is shocked and devastated by the news we received last Friday," their statement read. "We do not support discrimination of any sort and have never advocated or condoned violence as a solution to differences."

Garden City is home to a Tyson Foods cattle slaughterhouse that employs many immigrants, including many of the Somalis who settled there. On Saturday, law enforcement officials met with hundreds of these immigrants in Garden City to try to reassure them of their safety, including Somalis, Malaysians and Burmese, among others.

Police Chief Michael Utz told them that the defendants wanted to attack their religious beliefs, the Wichita Eagle reported.