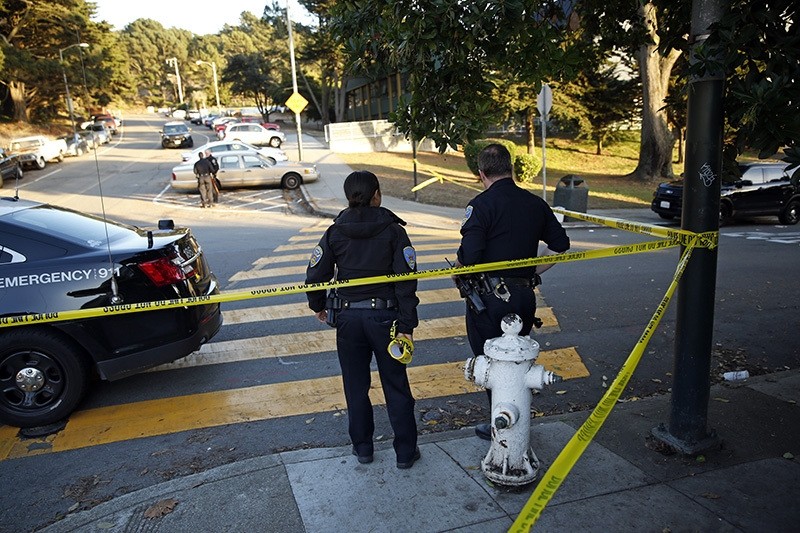 San Francisco Police stand at the site of a shooting outside the June Jordan School for Equity and City Arts and Technology High School, which share a campus, San Francisco, Calif., Oct. 18, 2016. (AP Photo)
by Associated Press Oct 19, 2016 12:00 am

Four teenage students were shot in the shared parking lot of two San Francisco high schools Tuesday, and one of the students is in critical condition, authorities said.

The shooting occurred as students were being let out of school for the day from the June Jordan School for Equity and City Arts and Technology High School, which share a campus, San Francisco Police Officer Carlos Manfredi said.

Three of the victims ran inside the school, and police initially ordered students to stay in place until police searched each room and determined it was not an active shooter situation. A fourth victim hurt in the shooting went to the Bayview Police Station, Manfredi said.

"One female victim has life-threatening injuries to her upper torso," he said.

The shooters, who are not students at the school, seemed to have targeted the female student, officials said.

"This was an isolated incident outside of the school building where one student was being targeted by outsiders," the San Francisco Unified School District said in a statement.

Classes at June Jordan School in the city's Excelsior District will resume Wednesday and extra security and counselors for students will be available, it said.