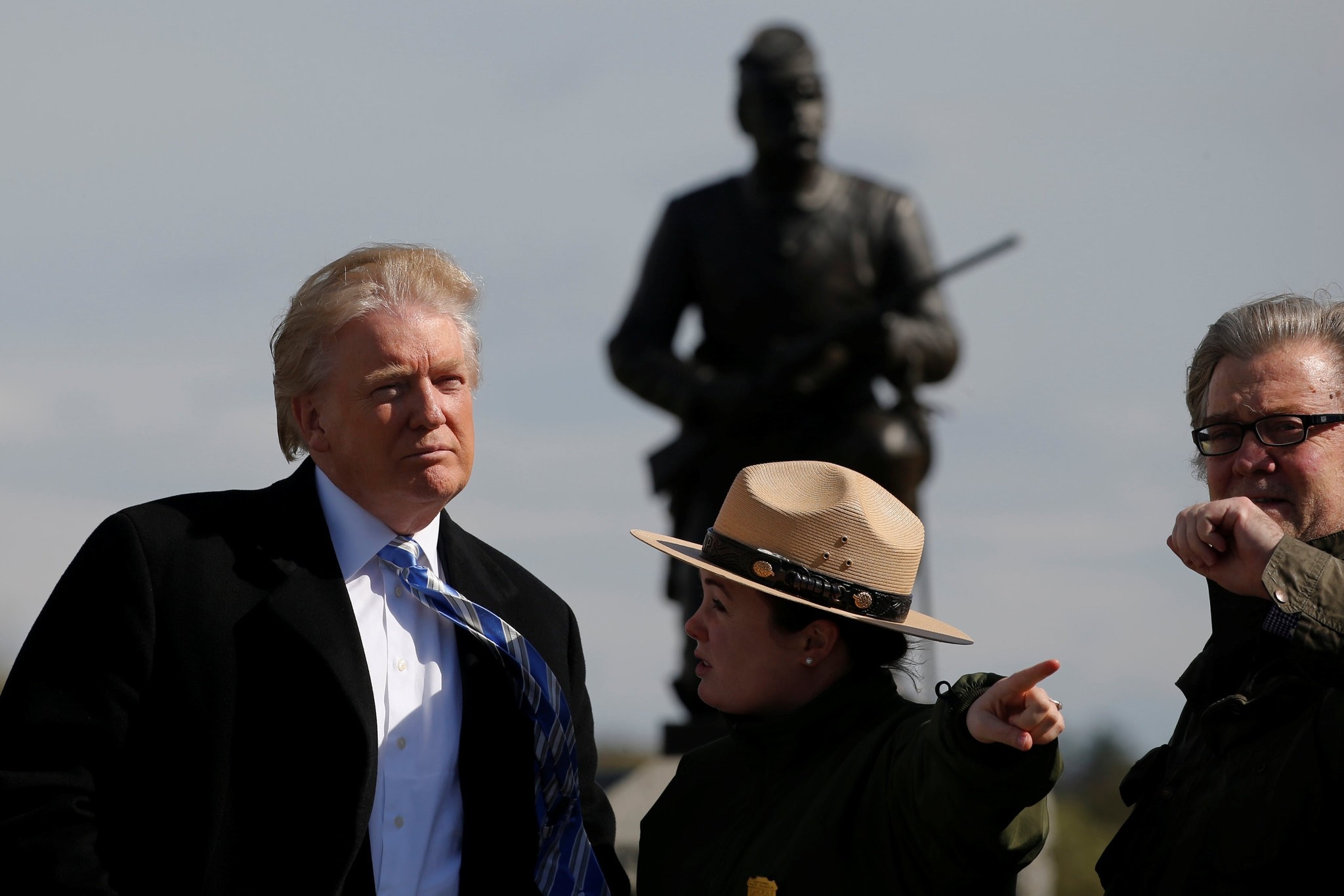 Donald Trump on Saturday unveiled plans for the first 100 days of his presidency, vowing to create 25 million jobs over a decade and middle class tax cuts, as he and Hillary Clinton courted undecided swing state voters.

While offering a number of concrete policy initiatives, the Republican billionaire also attacked his critics, threatening to sue the "liars" who have accused him of sexual assault, and saying Clinton should have been barred from running.

Trump's campaign team cast his 45-minute speech in Gettysburg -- where Abraham Lincoln delivered his key Civil War address to try to unite the nation -- as his "closing arguments" with 17 days to go before Election Day.

His appearance in Pennsylvania -- a key swing state in the November 8 battle for the White House where his Democratic rival was due to stage rallies later in the day -- came at the start of a weekend battleground campaign blitz.

Clinton, the 68-year-old former secretary of state, is leading in the national polls by an average of more than 5.3 percentage points in a two- or four-way contest, according to RealClearPolitics.

"Change has to come from outside our very broken system," Trump told a room of several hundred supporters, saying the nation needed to look to Lincoln's example to heal sharp divisions.

"Our campaign represents the kind of change that only arrives once in a lifetime."

The 70-year-old Manhattan real estate mogul then listed a number of measures he would undertake in the first 100 days of his administration, delivering prepared remarks rather than using his trademark off-the-cuff style.

"We now find ourselves at that very special fork in the road. Do we repeat the mistakes of the past or do we choose to believe that a great future, yet unwritten lies ahead for us and for our wonderful, beloved country?" he asked.

Trump has seen his campaign spiral downwards in recent weeks, after a number of women made allegations that he sexually assaulted them -- claims he again insisted Saturday were false.

"The events never happened. Never. All of these liars will be sued after the election is over," he said to cheers.

Those allegations came on the heels of the release of a 2005 video, in which Trump is heard making lewd comments about women to a television talk show host and saying his fame entitles him to grope women.

He also revisited his claims of vote "rigging" -- comments that have outraged even fellow Republicans and drawn scorn from President Barack Obama for breaking with political decorum -- and blamed the media for his dip in the polls.

Clinton on Friday excoriated Trump as a threat to American democracy for not pledging to honor the results of the election.

"We know the difference between leadership and dictatorship, and the peaceful transition of power is one of the things that sets us apart," Clinton told a rally in Cleveland, Ohio, another key swing state up for grabs.

"Donald Trump refused to say that he'd respect the results of this election. By doing that, he's threatening our democracy."

Despite isolated allegations of voter fraud, controversy over the tight 2000 vote and rampant gerrymandering, US elections have been regarded as free and fair.

Invigorated by both her commanding poll numbers and Trump's eyebrow-raising declarations, the candidate vying to become America's first female president was set for two campaign stops in Pennsylvania on Saturday.

Clinton holds leads in several battleground states, ranging from razor-thin, such as in North Carolina, to moderate in Florida and Pennsylvania and commanding in Virginia.

Trump, well aware that no Republican has ever won the White House without winning Ohio, campaigned in the Buckeye State Thursday and was due there later Saturday for a rally with running mate Mike Pence.

If Trump loses Florida, Pennsylvania and North Carolina, Clinton is all but assured of victory, experts have said.

On Friday, Trump said he would give the campaign everything he had, "right up until the actual vote" -- but also offered a rare acknowledgement that he might lose.

"Win, lose or draw... I will be happy with myself," he said in North Carolina.