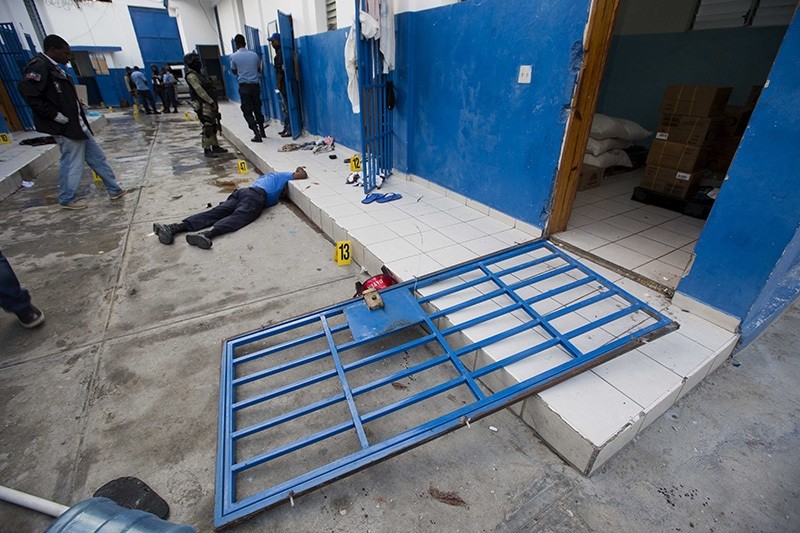 A guard lies dead inside the Civil Prison after a jail break in the coastal town of Arcahaie, Haiti, Saturday, Oct. 22, 2016. Over 100 inmates escaped after they overpowered guards who were escorting them to a bathing area. (AP Photo)
by Associated Press Oct 23, 2016 12:00 am

Police officers were searching cars and boats for escaped prisoners on Sunday after recapturing at least a dozen of the 172 inmates who overpowered guards and escaped from a lockup in central Haiti, the prison's director said.

The prison break occurred Saturday in Arcahaie, a coastal town about 30 miles north of Haiti's capital. The community is far from the southwest area that was slammed by Hurricane Matthew's eye earlier this month.

One guard was reported killed and others were injured. An inmate reportedly died following a bad fall while trying to scale a prison wall.

Justice Minister Camille Edward Junior told Haiti's biggest newspaper, The Nouvelliste, that the alleged mastermind of the escape, convicted kidnapper Yvener Carelus, was among the men captured after the prison break.

"He planned the escape from the inside with a few accomplices," the minister was quoted as saying.

Prime Minister Enex Jean-Charles said the interim government has given clear instructions to the justice minister to "take all necessary measures to remedy this unacceptable situation."

Judge Henry Claude Louis-Jean said Saturday that the escapees stole an unknown number of weapons and some exchanged gunfire with police during the chaotic breakout.

The inmates attacked after they were released from a crammed holding pen to bathe, according to provincial authorities.

Haitian prisons are notoriously overcrowded and many inmates spend years in pre-trial detention. It wasn't immediately clear how many of the escaped inmates in Arcahaie were convicted of serious crimes and how many were awaiting trial.

Police asked jittery residents of the coastal area to follow authorities' instructions during the manhunt.

The U.S. Embassy advised all American citizens to avoid the area.