Trump's star on Hollywood Walk of Fame smashed with sledgehammer 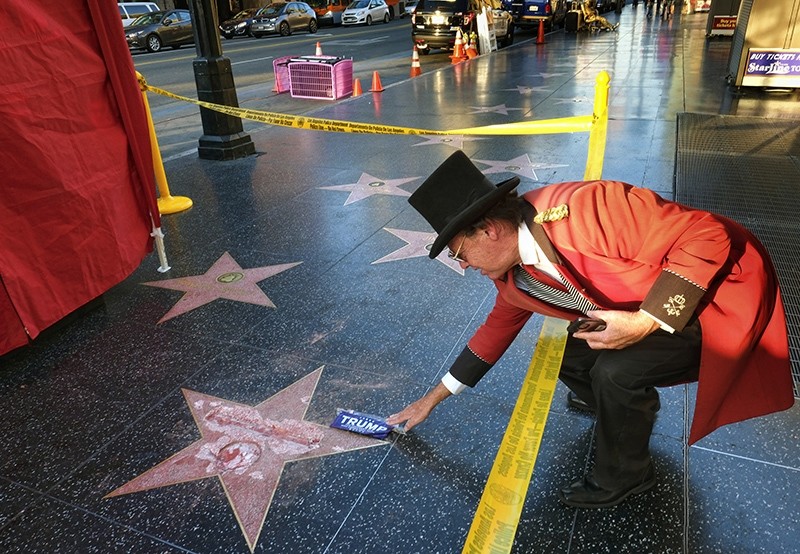 Gregg Donovan, who calls himself the unofficial ambassador of Hollywood, places a sticker for Republican presidential candidate Donald Trump on Trump's vandalized star on the Hollywood Walk of Fame. (AP Photo)
by Oct 26, 2016 12:00 am

A man defaced Republican presidential candidate Donald Trump's star on the Hollywood Walk of Fame Wednesday, hacking out the gold lettering displaying his name and the television logo.

A man who identified himself to a local news agency as James Lambert Otis, said he vandalized the tribute with a sledgehammer and pickaxe, originally intended to remove the entire star from the sidewalk on Hollywood Boulevard.

He said was going to auction it and donate the proceeds to the women who allege they were groped or sexually mistreated by Trump - charges the real estate tycoon denies - but was unable to lift the paving slab.

"It was very difficult. The stone was like marble -- hard to get through," he said about an hour after the 5:45 am attack on the star.

Dressed in construction overalls, Otis said he used the hammer and pick to hack away Trump's name and the logo indicating the star had been awarded in the category of television - for Trump's work on his reality show, "The Apprentice."

Otis said he still hoped he can sell the pilfered pieces and return to do the star further damage.

This is not the first time that Trump's Walk of Fame star, which he got in 2007, has been targeted.

In July, a Los Angeles-based street artist built a six-inch wall around the Republican presidential hopeful's star, made of wooden planks and topped with barbed wire.

Trump has repeatedly vowed during his campaign to build a wall between Mexico and the United States, drawing criticism from rights groups.

Last year, excrement was left on the star and someone drew a large yellow X over it.

A swastika and a mute symbol were also drawn on the red tile earlier this year.