Wave of violence, hate crimes hit US as election nears 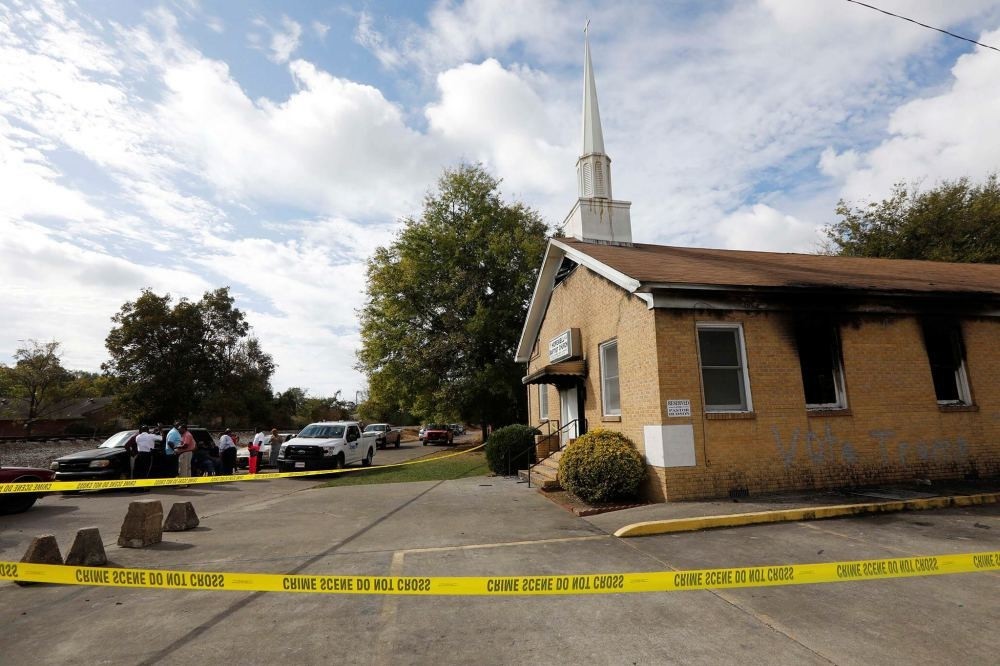 Ahead of the presidential election on Nov. 8, the United States has seen a sharp rise in violence and hate crimes, from an arson attack at a Mississippi church on Wednesday to reports of armed militia groups preparing for post-election unrest, adding to a long list of incidents

A presidential election campaign that has defied predictions, polarized the country and upended the political establishment, the U.S. has been shaken by increasing acts of violence and hate crimes. Arson has been suspected as the cause behind a blaze that on Tuesday night destroyed an African-American church in Mississippi, where pro-Donald Trump slogans had also been spray-painted on the exterior, while some prominent Trump supporters have hinted at violence over the past week. The FBI has opened a civil rights investigation into the fire at the 200-member Hopewell Missionary Baptist Church, after Greenville Mayor Errick Simmons called the fire and graffiti a hate crime.

Mayor Simmons called the arson a "heinous, hateful, cowardly act." "We consider it a hate crime... because of the political message which we believe was intended to interfere with worship and intimidate voters," Simmons said. "This act is a direct assault on people's right to freely worship." The mayor said the FBI and the Mississippi Bureau of Investigation are assisting the investigation in the Mississippi River city, where about 78 percent of the 32,100 residents are African-American.

A Ku Klux Klan newspaper has declared its support for Trump's Republican run for U.S. president, saying America became great because it was a white, Christian republic.

The Crusader, one of the white supremacist group's most prominent publications, published a lengthy endorsement and defense of Trump's message on the front page of its current issue under the headline: "Make America Great Again," which is also Trump's campaign slogan. The Trump campaign rejected the group's support. In a statement, campaign spokesman Steven Cheung said, "Trump and the campaign denounce hate in any form. This publication is repulsive and their views do not represent the tens of millions of Americans who are uniting behind our campaign."

The KKK is the oldest white supremacist group in the United States, tracing its roots back to the Reconstruction period in the South that followed the Civil War. In addition to anti-black views, it has expressed anti-Semitic, anti-immigrant and anti-gay views and, until recently, was anti-Roman Catholic.

US militia prepares for armed conflict

As the most divisive presidential election in recent memory nears its conclusion, some armed militia groups are preparing for the possibility of any form of "rigging" or irregularities on Nov. 8 and civil unrest in the days following a victory by Democrat Hillary Clinton.

Trump's populist campaign has energized militia members like Hill, who admire the Republican mogul's promise to deport illegal immigrants, stop Muslims from entering the country and build a wall along the Mexico border. Trump has repeatedly warned that the election may be "rigged," and has said he may not respect the results if he does not win. At least one paramilitary group, the Oath Keepers, has called on members to monitor voting sites for signs of fraud.

Armed paramilitary groups first gained prominence in the early 1990s, fueled by confrontations in Ruby Ridge, Idaho and Waco, Texas, culminating in a militia sympathizer's 1995 bombing of a federal office building in Oklahoma City that killed 168 people. Their numbers dwindled following that attack but have spiked in recent years, driven by fears that President Barack Obama will threaten gun ownership and erode the power of local government.

Time is running out to sway undecided US voters 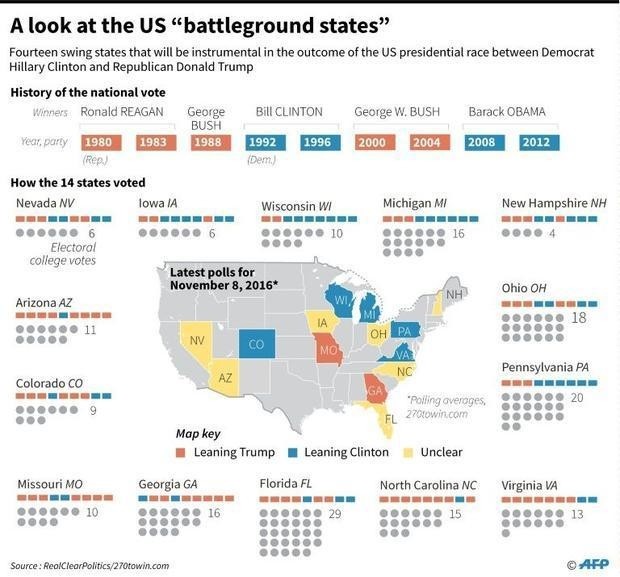 With five days to go until the election, the outcome of the U.S. presidential race between Democrat Hillary Clinton and Republican Donald Trump depends on the 14 swing states including Colorado, Florida, Iowa, Michigan, Nevada, New Hampshire, North Carolina, Ohio, Pennsylvania, Virginia, Wisconsin, Georgia, Missouri and Arizona. As Missouri and Georgia are leaning toward Trump, Colorado, Wisconsin, Michigan, Virginia and Pennsylvania lean toward Clinton. The long and often unedifying 2016 race is now being fought in a few corners of a few states, most notably Florida, Ohio and North Carolina. Clinton's campaign has been eyeing Arizona for weeks, given Trump's unpopularity with Hispanic voters. As part of her pitch to voters in the state, Clinton painted a grim view of life for Hispanics under a Trump administration. Trump has been devoting his time to Florida.