Trump's wife modeled in US before getting work visa, reports reveal 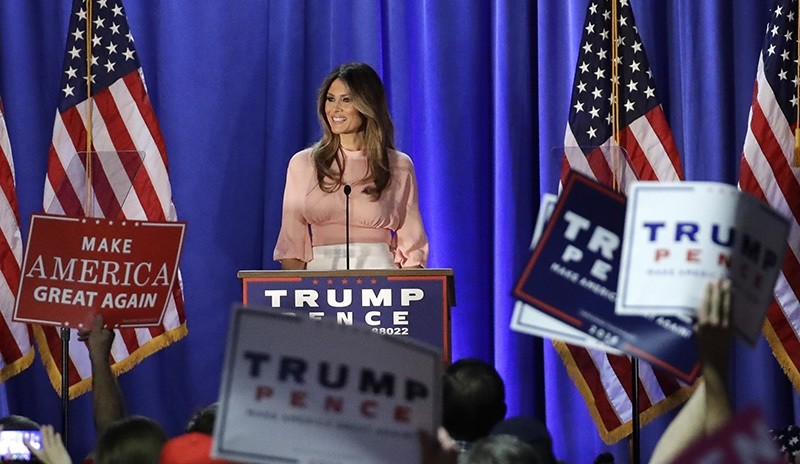 Melania Trump was paid for 10 modeling jobs in the United States worth $20,056 that occurred in the seven weeks before she had legal permission to work in the country, according to detailed accounting ledgers, contracts and related documents from 20 years ago provided to The Associated Press.

The details of Mrs. Trump's early paid modeling work in the U.S. emerged in the final days of a bitter presidential campaign in which her husband, Donald Trump, has taken a hard line on immigration laws and those who violate them. Trump has proposed broader use of the government's E-verify system allowing employers to check whether job applicants are authorized to work.

Mrs. Trump, who received a green card in March 2001 and became a U.S. citizen in 2006, has always maintained that she arrived in the country legally and never violated the terms of her immigration status.

The documents obtained by the AP show she was paid for 10 modeling assignments between Sept. 10 and Oct. 15, during a time when her visa allowed her generally to be in the U.S. and look for work but not perform paid work in the country.

It is highly unlikely the discovery will affect the citizenship status of Mrs. Trump. The government can seek to revoke the U.S. citizenship of immigrants after the fact in cases when it determines a person willfully misrepresented or concealed facts relevant to his naturalization. But it effectively does this in only the most egregious cases, such as instances involving terrorism or war crimes.

The disclosures about the payments come as Mrs. Trump takes on a more substantial role advocating for her husband's candidacy. She made her first speech in months Thursday, in which she spoke of her time working as a model in Europe and her decision to come to the U.S.

The documents obtained by the AP included ledgers, other accounting documents and a management agreement signed by Mrs. Trump from Metropolitan International Management that covered parts of 1996 and 1997. The AP obtained the files this week after seeking copies since August from employees of the now-defunct modeling firm, after Mrs. Trump made comments earlier this summer that appeared inconsistent with U.S. immigration rules.

A New York immigration lawyer whom Mrs. Trump asked to review her immigration documents, Michael J. Wildes, reviewed some of the ledgers at AP's request. Wildes said in a brief statement that "these documents, which have not been verified, do not reflect our records including corresponding passport stamps."

During the seven-week period between Mrs. Trump's arrival in the U.S. and her work visa, the ledgers list modeling work for clients that included Fitness magazine and Bergdorf Goodman department store. The management agreement, which said it was not an employment agreement, included a handwritten date of Aug. 27, 1996. The top of the document said it was "made and entered into as of this 4th day of September 1996."

Many of the documents were part of a legal dispute related to the dissolution of the firm in the late 1990s and found recently in storage. The accounting ledgers for the firm's models were listed on hundreds of pages of continuously fed paper that appeared yellowed with age. They were authenticated by a former employee who worked at the firm at the time. The employee spoke on condition of anonymity because this person feared retaliation and threats from Trump's presidential campaign.

A former partner, Paolo Zampolli, who previously told the AP that he recruited Mrs. Trump to come to the U.S. as a model, confirmed that the contract language was used by his firm and his signature appeared on the document. Mrs. Trump's signature on the contract resembled her signature on her marriage license recorded in 2005.

Asked about the two dates on the document, Zampolli said he usually vacationed in Europe each August and likely arranged for the contract to be formally executed when he returned to New York after Labor Day, even though Mrs. Trump had signed it eight days earlier.

Zampolli said the ledgers for Mrs. Trump were consistent with printouts used by his firm at the time, but he would not personally vouch for them because he said money matters were handled by the company's chief financial officer, who has since died. Zampolli said he did not recall Mrs. Trump working without legal permission.

Some ledgers were first made available to True.Ink, an online lifestyle publication, and then independently obtained and verified by the AP.