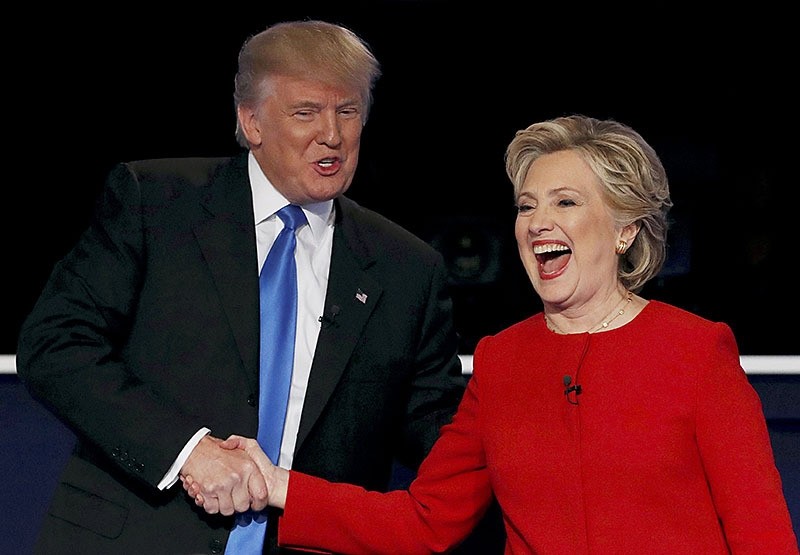 In final bids to win enough votes to secure their ticket to the White House, Donald Trump presses into democratic strongholds amid security scare, as Hilary Clinton looked to an army of A-list celebrities over the weekend

As the last days of the U.S. elections continues with scandals, insults and a recent security scare for Trump at a campaign rally, Donald Trump and Hillary Clinton, the candidates for the Republican and Democratic parties respectively, packed their schedules over the weekend, two days out from an election that has gripped the world. Trump was rushed off the stage by security in Reno, Nevada, following a disturbance in the crowd not far from his podium.

A man was escorted out of the venue for loud booing and the Republican nominee resumed his speech shortly afterwards, telling the crowd, "Nobody said it was going to be easy for us, but we will never be stopped."

A Secret Service spokesperson later said an "unidentified individual" had shouted "gun" in the audience, though no weapon was found after a "thorough search," according to CNN. Trump's Democratic rival, Clinton, appeared at a rally in Philadelphia with pop singer Katy Perry on Saturday.

Donald Trump criticized Hillary Clinton's celebrity supporters in his last speech during a long campaign Saturday. "I don't need Beyoncé and I don't need Jay Z," Trump said in Denver, Colorado, referring to two of a number of pop stars who attended a rally with Clinton on Friday. "It's demeaning to the political process, it really is," Trump said.

Supercharging the bluster, hyperbole and media mastery that made him one of the world's best-known businessmen, republican candidate Donald Trump upended U.S. democratic traditions on a 17-month quest he hopes will lead to the White House. From his grand Trump Tower escalator entrance into the Republican presidential race on June 16, 2015, Trump managed to be simultaneously elitist and populist, lewd and pious as he drilled into a lode of polarity and anti-Washington anger among American voters. In Tuesday's election against Democrat Hillary Clinton, Trump is making his first run for public office. Trump called it a movement, not a campaign.

Clinton's campaign has spent more than $267 million on television advertising through Election Day. Trump, who claims a net worth of roughly $10 billion, has invested $93 million, according to data collected by Kantar Media.

At least 41 million Americans across 48 states have already cast ballots, according to an Associated Press analysis. That's significantly more votes four days before Election Day than those who voted early in the 2012 election.
Last Update: Nov 07, 2016 9:06 am
RELATED TOPICS