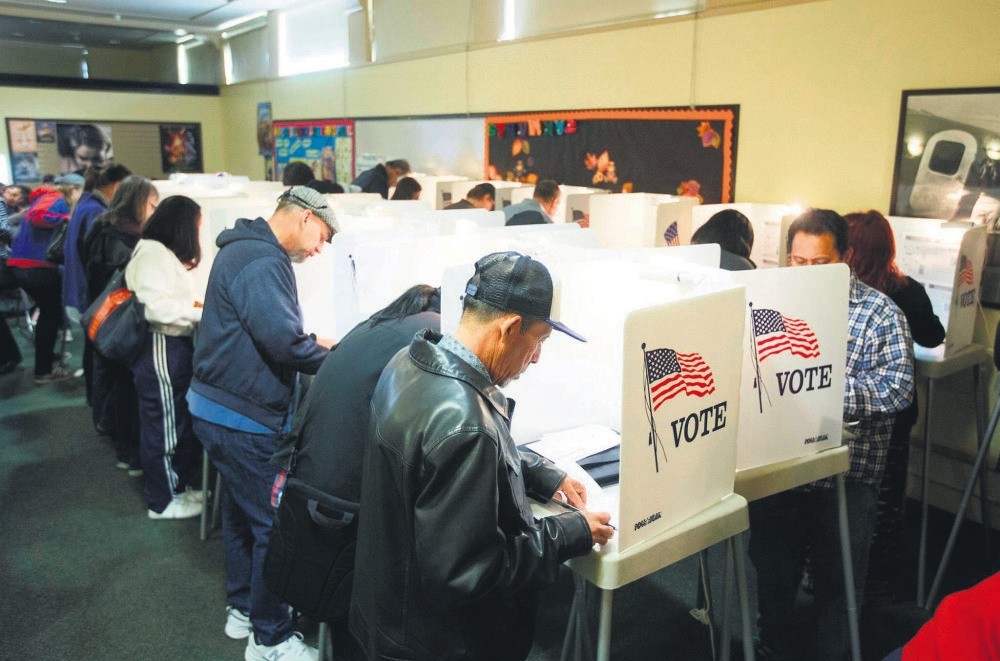 Voters cast their presidential ballots after waiting in a line for nearly four hours long during weekend early voting at a polling station in North Hollywood, California, Nov. 5.
by Compiled from Wire Services Nov 08, 2016 12:00 am

After the most divisive presidential election campaign in U.S. history, Americans are set to see who the 45th U.S. president will be: Hillary Clinton or Donald Trump

America goes to the polls to elect its 45th president Tuesday, as the historically divisive 2016 presidential election campaign comes to an end. As the race for the White House is almost over, the world has witnessed the unprecedented election dispute between Democratic candidate Hillary Clinton and her Republican rival Donald Trump.

The first surprises could come from Georgia if Trump loses that normally Republican-leaning state, and if Virginia, won by Barack Obama in 2012, eludes Clinton.

Half an hour later, the surprise could come from the battleground states of Ohio and North Carolina, which have 18 and 15 electoral votes, respectively. Ohio, a fallen industrial powerhouse, is historically Democratic territory while North Carolina tends to vote Republican. But either could swing the other way this year.

Over the next 90 minutes or so, a burst of results from some 30 states accounting for dozens of electoral votes will further fill in the red and blue electoral map.

All eyes will be on Florida - an ethnically and politically mixed snapshot of America that accounts for a whopping 29 electoral votes. Obama won it narrowly in 2012. Back in 2000, in the historic disputed election that kept the nation on the edge of its seat for days, George W. Bush defeated Al Gore there.

Much attention will also be paid to the small northeastern state of New Hampshire, which normally votes for Democrats but is seen as possibly up for grabs this time, and Pennsylvania, another former industrial powerhouse that normally leans Democratic and holds a prize of 20 electoral votes.

Heading west, Arizona and Texas - conservative states that border Mexico - are seen as possible prey for Clinton. And in the other direction, Colorado, Michigan and Wisconsin - Democratic strongholds that account for 35 electoral votes between them - are seen as maybe going to Trump.

Clinton gets boost from FBI

Democrat Clinton headed into the final day of a tight White House race against Republican Trump yesterday with new momentum after the FBI said no criminal charges were forthcoming in an investigation of her email practices.

FBI Director James Comey again sent shockwaves through the race by telling Congress on Sunday that investigators had worked around the clock to complete a review of newly discovered emails and found no reason to change their July finding that Clinton was not guilty of criminal wrongdoing in her use of a private email server while secretary of state.

It was uncertain whether the announcement came in time to change voters' minds or undo any damage from days of Republican attacks on Clinton as corrupt. Tens of millions of Americans had cast early votes in the 10 days since Comey first told Congress of the newly discovered emails.