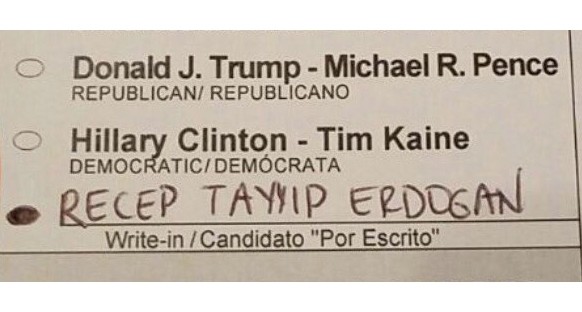 A photo went viral on Twitter late Tuesday in which an unknown voter chose President Recep Tayyip Erdoğan in the U.S. presidential elections rather than Hillary Clinton or Donald Trump.

The voter wrote the President's name in the blank area under the names of 'other candidates.'

U.S. voters went to the polls to elect their 45th president Tuesday, as the historically divisive 2016 presidential election campaign comes to an end. As the race for the White House is over, the world has witnessed the unprecedented election dispute between Democratic candidate Hillary Clinton and her Republican rival Donald Trump.