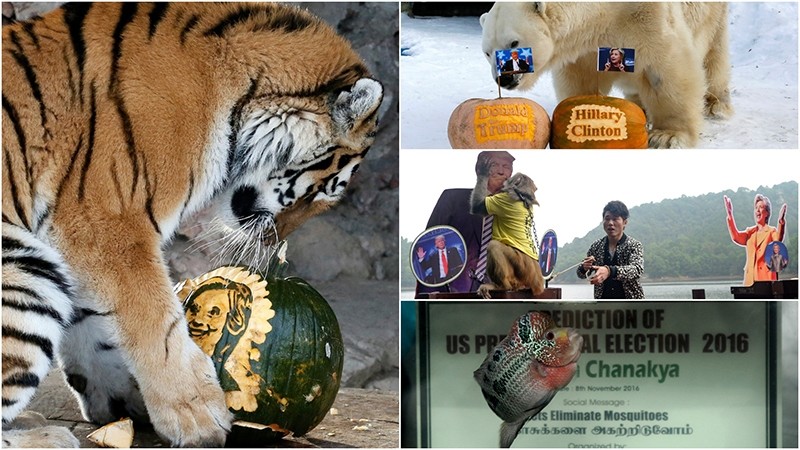 A tiger and polar bear in a Siberian zoo made contrasting predictions of the outcome of Tuesday's U.S. election when invited to choose between pumpkins representing Hillary Clinton and Donald Trump.

Female tiger Yunona favored a pumpkin carved with the image of Clinton, the Democratic nominee, while polar bear Felix opted after some deliberation for one bearing the name of Republican candidate Trump.

The Royev Ruchey Zoo in Krasnoyarsk, which released a video of the two, said the animals faced a tough choice as the pumpkins had been filled with fresh meat and fish, both favorite treats with Yunona and Felix.

The fish was seen swimming towards Trump on three separate occasions.

Just a little further east a Chinese monkey described as the "king of prophets" tipped Trump for the U.S. presidency after the creature successfully predicted the winner of football's European Championship final earlier this year.

Known as Geda -- which means knots or goose bumps -- the prophetic primate is the latest in a series of purportedly psychic animals that have popped up around the world since Paul the Octopus correctly predicted multiple 2010 World Cup matches.

The simian seer, wearing a yellow shirt emblazoned with his title, was given a chance to pick between life-sized cut-outs of Republican Trump and his Democratic challenger Hillary Clinton.

After "deliberate thought" the mystic monkey chose Trump, Shiyanhu Ecological Tourism Park said Thursday in a statement on its website. Without even waiting, he congratulated the cardboard candidate with a kiss on the lips.

Geda's antics seem to have been inspired by the oracular octopus Paul.

In 2010, Paul the Octopus became the world's most famous mollusc when he foretold the results of every match played by Germany at the World Cup in South Africa, as well as Spain's victory against the Netherlands in the final.