Trump and Clinton cast ballots in polarized US elections 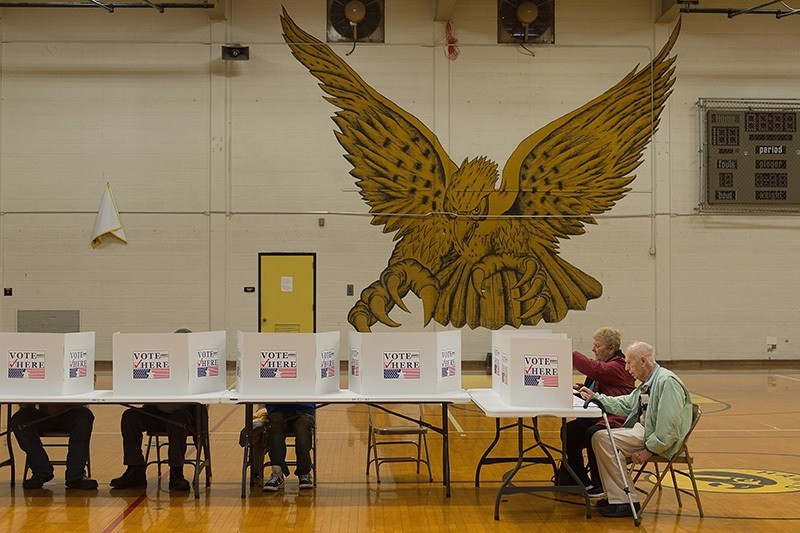 Voters cast their ballots at a polling station at Hazelwood Central High School on November 8, 2016 in Florissant, Missouri (AFP Photo)
by Associated Press Nov 08, 2016 12:00 am

A polarized America went to the polls Tuesday to pick its 45th president, choosing to elect either Hillary Clinton as the nation's first female commander in chief or billionaire businessman Donald Trump after a long and rancorous campaign that upended U.S. politics.

Clinton and her husband, former President Bill Clinton, arrived to vote at their local polling station in Chappaqua, New York, shortly after 8 a.m. as a crowd of cheering supporters snapped photos. Trump was voting in Manhattan.

"I know how much responsibility goes with this," Clinton said. "So many people are counting on the outcome of this election, what it means for our country, and I will do the very best I can if I'm fortunate enough to win today."

"I see so many hopes and so many dreams out there that didn't happen, that could have happened, with leadership, with proper leadership," he said by telephone on Fox News. "And people are hurt so badly."

Almost 45 million people cast ballots in advance before Election Day. Many voters expressed relief the end was in sight after two years of relentless campaigning, racially loaded rhetoric and sharp accusations against each candidate.

Clinton has condemned Trump for referring to undocumented Mexican immigrants as "rapists" and promoting a ban on Muslims entering the U.S., and for his long line of remarks about women that culminated in an audio in which he brags about grabbing women's genitalia. Trump calls his opponent "Crooked Hillary" for her use of a private email server as secretary of state and for her complicated ties with the Clinton Foundation run by her husband.

"I'm tired of the mudslinging," said Laura Schmitt, a 54-year-old Republican from Woodbury, Minnesota, who is voting for Trump.

"I'm so glad it's over," said Ramiro Wires, a 50-year-old homemaker from Indianapolis, who voted for Clinton.

The candidates both spent Tuesday giving a series of radio interviews in states still up for grabs, after blitzing through the remaining battlegrounds a day earlier.

Clinton has been buoyed by FBI Director James Comey's weekend declaration that he would not recommend criminal charges against her following a new email review. Comey announced the inquiry late last month, sapping Clinton's surging momentum and threatening Democrats in down-ballot races.

The centerpiece of Clinton's final campaign swing on Monday was a massive rally on Philadelphia's Independence Mall, where she was joined by her husband. President Barack Obama and first lady Michelle Obama participated, too.

"We know enough about my opponent, we know who he is," Clinton said as she addressed the crowd of 33,000, her largest of the campaign. "The real question for us is what kind of country we want to be."

Trump closed his improbable presidential bid in trademark style, flying across the country in his now-familiar private jet and headlining packed rallies filled with enthusiastic supporters. As he surveyed a crowd in Scranton, Pennsylvania, he declared: "It's been a long journey."

"We have to win," Trump said as he ended a marathon final day of campaigning in Grand Rapids, Michigan.

Having made the new FBI review a centerpiece of his closing case to voters, Trump said Clinton was being protected by a "totally rigged system."

"You have one magnificent chance to beat the corrupt system and deliver justice," Trump implored his supporters. "Do not let this opportunity slip away."

While Trump previously has suggested he wouldn't accept defeat, his eldest son, Donald Trump, Jr., told CNN on Tuesday: "In a fair election we are going to respect the outcome."

In an interview with ABC's "Good Morning America," Tim Kaine said Clinton can clinch victory if she wins any of the "checkmate" battleground states, listing North Carolina, Pennsylvania, Florida and Ohio in that category.

Clinton is banking on turnout from Obama's young, diverse coalition of voters to carry her over the finish line. Several states with advance voting have reported record turnout, including Florida and Nevada, whose booming Hispanic populations are expected to pull for Clinton.

In Florida alone, Hispanic participation was up by more than 453,000 votes, nearly doubling the 2012 level.

In Nevada, where more than three-fourths of expected ballots have been cast, Democrats led 42 percent to 36 percent.