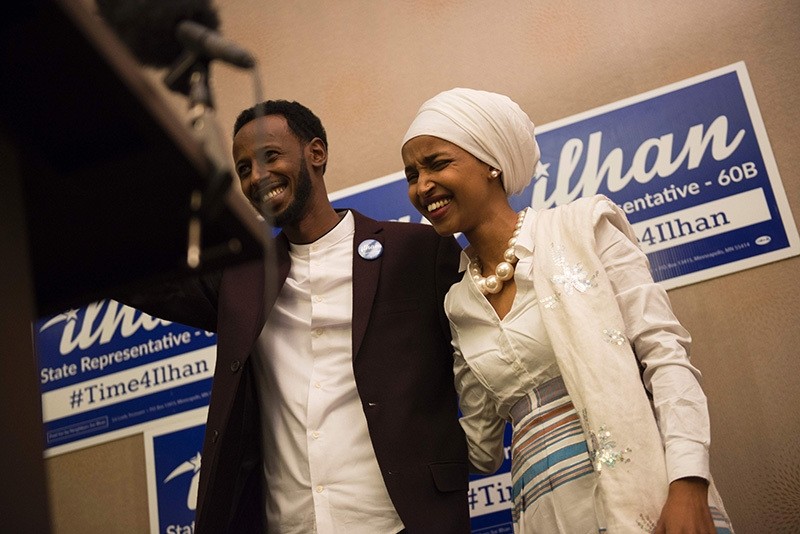 Ilhan Omar, candidate for State Representative for District 60B in Minnesota, with her husband Ahmed Hirisi, arrives for her victort party on election night, November 8, 2016 in Minneapolis, Minnesota. (AFP Photo)
by Associated Press Nov 09, 2016 12:00 am

Ilhan Omar spent four years in a Kenyan refugee camp as a young girl, fleeing with her family from civil war in Somalia. Two decades later, after forging a new life in Minnesota, she appears on the brink of becoming the nation's first Somali-American state legislator.

According to the unofficial results on early Wednesday, Omar seems to have accomplished her dream and made her way into the U.S. House of Representatives.

Here's how Omar won the nomination to run for the congress:

On Aug. 9, Omar, a 33-year-old community activist, cried as she delivered victory speeches in English and Somali after defeating a 44-year incumbent in the latest sign of the Somali community's growing influence in the city and state. Her victory in a heavily Democratic Minneapolis district makes her a strong favorite in the general election — where her Republican opponent is also a Somali immigrant.

"Tonight we made history," Omar told supporters after her win on late Aug. 9. "Tonight marks the beginning of the future of our district, a new era of representation."

A seat in the Legislature would be a new high-water mark for Minnesota Somalis, who in recent years have won seats on the Minneapolis school board and City Council. First drawn in the early 1990s by welcoming social programs, they're now estimated by the census to number around 40,000, though community advocates say the figure is much higher.

In an interview on Aug. 10, Omar said her campaign set out to build a broad-based coalition of not only East Africans, but longtime residents and students in a district that encompasses the University of Minnesota's Minneapolis campus and Augsburg College. She said she hopes her victory sends a message to young women of color who are thinking about running for office that they can raise money, shatter stereotypes and win big.

"I hope our story is an inspirational story to many people," Ilan said. She said her priorities would be "closing the opportunity gap in our educational system, working on criminal justice reform, taking on policing reform," and making sure that minority women entrepreneurs are given the help they need to succeed.

The city's Cedar-Riverside neighborhood, popularly known as Little Mogadishu, was glowing Wednesday over her victory.

Bashir Egal, a local banker, said he was eager to see someone from his community at the Capitol. He said he knows Omar from her work on local events, and she knows firsthand about the Somali community's challenges, including housing, unemployment and security issues.

"She can take that to mainstream America," the 27-year-old said. "She's not someone who is taking the information from a third party — she lived it."

After coming to the United States when she was 8 years old, Omar's family first settled in Arlington, Virginia, before moving to Minneapolis in 1997. A longtime political and community activist, she now works as director of policy initiatives for the Women Organizing Women Network, a group that counsels East African women on civic involvement and leadership. Her political background includes work as a senior policy aide and campaign manager for Minneapolis City Council Member Andrew Johnson.

In a sign that Omar's appeal stretched beyond the immigrant vote, she won despite losing to Noor by a wide margin in the district's heavily Somali Cedar-Riverside neighborhood. Johnson said it showed her support was far from one-dimensional.

"She has widespread support across the district, whether it's single-family homeowners, or students, or Somali residents," he said. "It was very broad."

As the Somali community has become more established in the state, its political influence has grown. Minneapolis voters elected a Somali emigre, Hussein Samatar, to the school board in 2010, a few years after then-Mayor R.T. Rybak had appointed him to the library board. Noor was appointed to the school board to fill out Samatar's term after he died. And Abdi Warsame, another Somali, was elected to the City Council in 2013.

Somali-American leaders say they know of no other Somali state legislators across the country. In Lewiston, Maine, which has long had one of the largest Somali communities in New England, no Somali candidate has risen above the school board.

Omar's Republican opponent in November will be Abdimalik Askar, another Somali immigrant who's an assistant principal at a charter school.

Mursal Jama, 48, was excited about Omar's win, even though he voted for Noor on the night of Aug. 09. He said he hopes she will be a role model for his five daughters and that he's confident she will deliver for the Somali community.

"We need our voice here in the Capitol," Jama said. "We want to be a policy-maker. We don't want to just sit in the back seat. ... We see politicians come and say the words only. And we want to change that."

Nearly lost in Omar's landmark victory was the end of Kahn's amazing run in the Minnesota Legislature.

The 79-year-old former biophysicist held her seat for 44 years and is tied as the longest-tenured legislator in state history. Known for sometimes offering offbeat legislation such as reducing the voting age to 12, Kahn also could boast a long record of achievements such as passage of the country's first indoor smoking restrictions, in 1975.

She rarely faced a serious challenger, but her district evolved over the decades from one dominated by the University of Minnesota into something much more diverse, and on Aug. 9, voters appeared more focused on the future than on her record.

Kahn said Wednesday she was proud of her accomplishments, particularly in the area of girls' athletics, the arts, the environment and government security. She said she is now looking ahead to the free time she will have and said she might "get on my bicycle and ride on all those bicycle trails I've gotten funding for Minneapolis."