Over 2.3 million plead US electors to choose Clinton instead of Trump 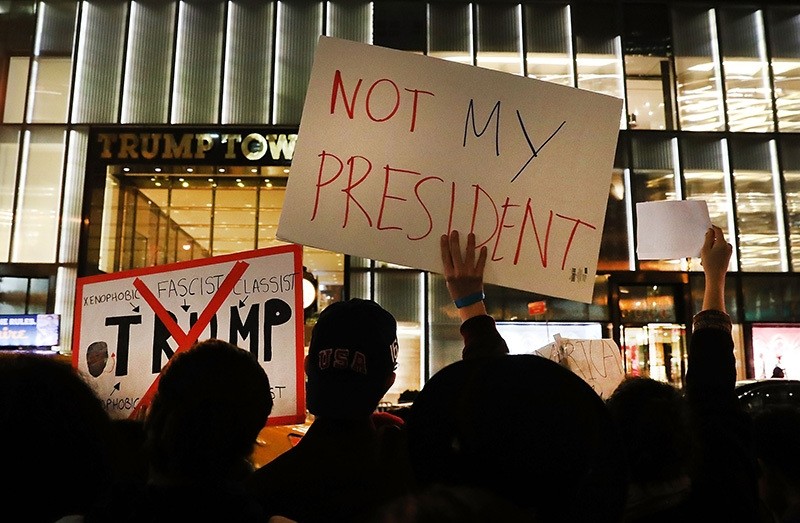 Dozens of anti-Donald Trump protesters stand along 5th Avenue in front of Trump Tower as New Yorkers react for a second night to the election of Trump as president of the United States on November 10, 2016 in New York City. (AFP Photo)
by Daily Sabah Nov 11, 2016 12:00 am

Following Donald Trump's unexpected victory in the U.S. presidential elections on November 8, the losing party continues to seek ways to reverse the outcome, this time through a method which hasn't been applied before and relies on the bizarre nature of the U.S. election system.

A petition on change.org which demands that the Electors of the Electoral College shift their vote to Democratic candidate Hillary Clinton has already managed to attract the support of 2,301,925 people.

Support for the petition is rapidly rising – during the time this article was being written, supporters of the petition has risen by100,000 people in only one hour. The petition targets the support of three million people.

Through the Electoral College system introduced in 1804, U.S. presidents are determined through the votes of 538 electors, which are allocated according to each state's population.

According to unofficial results projected by nearly all major U.S. news networks, Trump won at least 290 electors, securely above the 270 threshold needed for presidency, as he managed to win in more states, including in major battlegrounds. Clinton remained at 228 electors, while some 20 electors are yet to be determined.

The petition demands the electors switch their votes from Trump, which declares him unfit for being president for political and moral reasons.

The probability of such a switch, however, is pretty ambiguous. Out of the 50 states, only 26 states legally bind their electors, usually determined by parties, to vote for the presidential candidate they declared to do so. However, the burden of becoming a "faithless elector" is usually a fine, and the petition declares that "…we can be sure Clinton supporters will be glad to pay!"

The petition also base their demands on the reasoning that the popular vote was in fact won by Clinton, since the Democratic candidate is ahead of Trump by nearly 400,000 votes while the counting continues.

However, the electoral college system is designed to balance the preference of different parts of the far-flung country, and if Trump becomes the president, it would be the fifth time in U.S. history that the candidate with less votes has claimed the title. The last example was Republican candidate George W. Bush in 2000 presidential elections, who won the race with just 271 electors against Democratic candidate Al Gore's 266 while Gore received some 550,000 more votes.

A major obstacle before such a switch in electors' votes is that there are no precedents, which are of key importance for Anglo-Saxon legal and political systems. Despite personal faithless elector cases, there hasn't been any collective action against a candidate that has changed the election results.

Perhaps the main obstacle behind such a switch would be the reaction of Trump's supporters, who surely would react against such a political move, which would render the U.S. ungovernable.