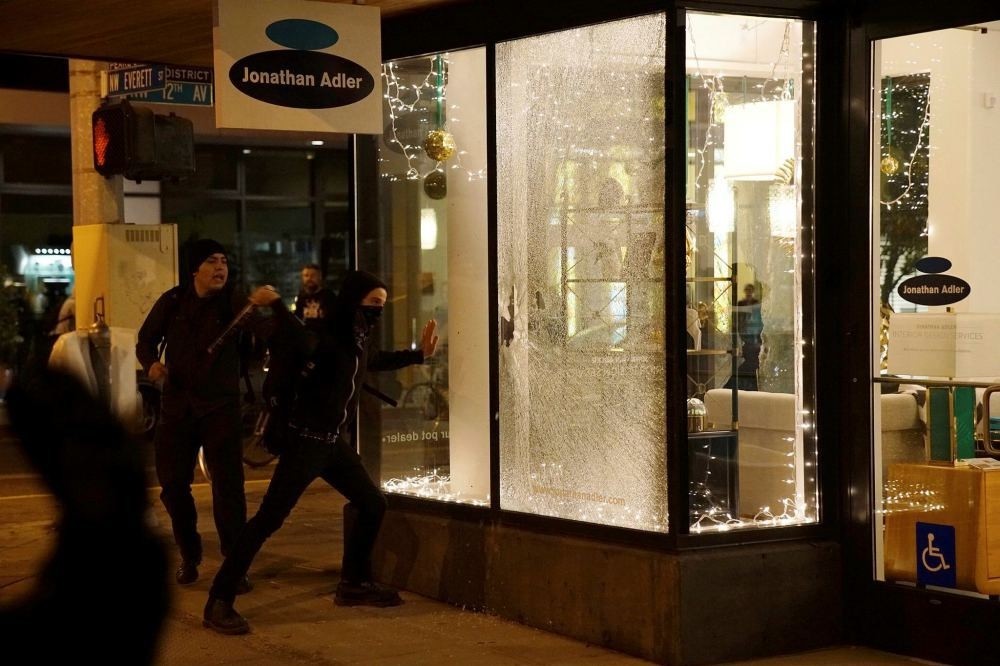 Demonstrators break a shop window during a protest against the election of Republican Donald Trump as President of the United States in Portland, Oregon, Nov. 11.
by Compiled from Wire Services Nov 12, 2016 12:00 am

The United States witnessed some of the worst violent protests in recent history with police reportedly arresting 26 in the city of Portland. President-elect Donald Trump promised to unite the country after saying the protests were ‘unfair'

Nationwide protests against Donald Trump's election surged across the United States, as thousands marched and some smashed store windows, lit firecrackers and sparked a dumpster blaze. The worst violence was in the northwestern city of Portland, where protesters hurled projectiles at officers, vandalized businesses, smashed car windows and attacked drivers. Police reported 26 arrests during demonstrations in the U.S. city of Portland on Thursday night and termed the protest a riot and used "less lethal munitions" to help clear the streets. Trump supporters said the protesters were not respecting the democratic process.

U.S. president-elect Trump promised to unite his divided country in a tweet praising some of the protesters demonstrating against him. "Love the fact that the small groups of protesters last night have passion for our great country. We will all come together and be proud!" Trump wrote on his official account. The protests were "incited by the media" and "unfair," he also said in his previous tweets.

The violence stood in contrast to an apparently harmonious meeting between Trump and President Barack Obama designed to heal divisions after the most acrimonious election campaign in recent memory. Obama and Trump put past animosity aside during the 90-minute White House meeting designed to quell fears about the health of the world's pre-eminent democracy, and vowed to carry out a smooth transfer of power.

White House officials said that Obama and Trump discussed a range of issues including global hotspots and the president's meetings next week abroad with leaders from Germany, Greece and across the Asia-Pacific.

Police had declared the demonstrations in the state of Oregon's largest city a riot late Thursday, saying that some protesters had armed themselves with rocks from a construction site. At least 19 cars were damaged by protesters at a car dealership near the city's wealthy Pearl district, The Oregonian newspaper reported. Estimates placed the number of protesters in Portland as high as 4,000, according to the report, after demonstrations the night before brought a 2,000-strong crowd of Trump opponents onto the streets.

In Minneapolis, Minnesota, around 1,000 protesters moved on to the Interstate 94 freeway, blocking traffic for over an hour, according to local broadcaster WCCO. "We just want to point out that it is a problem that he got elected, and we don't understand and we are worried about what he is going to try to do," an unnamed protester told the broadcaster.

In Denver, protesters managed to shut down Interstate 25 near downtown Denver briefly Thursday night. Police said demonstrators made their way onto the freeway and traffic was halted in the northbound and southbound lanes for about a half-hour. Protesters also briefly shut down interstate highways in Minneapolis and Los Angeles.

In San Francisco's downtown, high-spirited high school students marched through, chanting "not my president" and holding signs urging a Donald Trump eviction. They waved rainbow banners and Mexican flags, as bystanders in the heavily Democratic city high-fived the marchers from the sidelines. As of Thursday, Democrat Hillary Clinton was leading Trump in votes nationwide 47.7 percent to 47.5 percent, but Trump secured victory in the Electoral College.
RELATED TOPICS