US House approves bills to renew Iran sanctions, crack down on Syria 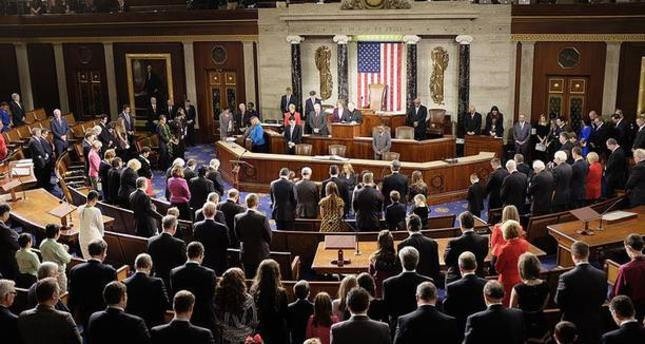 The House on Tuesday overwhelmingly approved bipartisan bills to crack down on supporters of Syria's Assad regime and renew a decades-old Iran sanctions law.

Swift passage underscored broad support on Capitol Hill for punishing financial backers of the Syrian regime and maintaining economic pressure on Tehran. Both bills had the firm backing of Rep. Ed Royce, R-Calif., chairman of the Foreign Affairs Committee, and Rep. Eliot Engel of New York, the panel's top Democrat.

The Senate must now act on the legislation before the bills can be sent to the president.

Lawmakers have accused the Assad regime of war crimes as the number of people killed during the violence in Syria continues to mount. The war, now in its sixth year, has killed as many as half a million people, contributed to Europe's worst refugee crisis since World War II and given the Daesh militant group room to grow into a global terror threat.

"What we have now is a grim lesson in human suffering," Royce said. "We can see the ethnic cleansing going on. Even the United Nations calls this 'crimes of historic proportions.' Enough's enough."

The Syria legislation targets key backers of Assad such as Russia and Iran, according to Royce, by requiring the president to sanction countries or companies that do business with or provide financing to the Syrian regime or the Central Bank of Syria.

Anyone that provides aircraft to Syria's commercial airlines, does business with the transportation and telecom sectors controlled by the Syrian regime, or supports the country's energy industry also would be subject to sanctions, according to the legislation.

"If you're acting as a lifeline to the Assad regime, you risk getting caught up in the net of our sanctions," Engel said.

Sanctions could be suspended if internationally recognized negotiations to resolve the war in Syria are making progress and the violence against civilians has ended, according the legislation.

The House bill would authorize the State Department to assist in the collection and preservation of evidence for war crimes trials. Secretary of State John Kerry last month called for a war crimes investigation of Russia and Syria, a move that escalated already heated rhetoric against Moscow for its part in a deadly military offensive in Aleppo, Syria's largest city, and its longstanding support of Assad.

The Syria legislation, formally titled the Caesar Syria Civilian Protection Act, is named after a crime scene photographer for the Syrian military who was reassigned to photograph the bodies of imprisoned Syrian rebels and dissidents after the conflict began. He later defected, and his archive of images of more than 10,000 bodies was smuggled out of the country. He went by the pseudonym Caesar, and he testified in disguise in July 2014 year before Foreign Affairs Committee, saying he had witnessed a "genocidal massacre."

The Iran Sanctions Extensions Act cleared the House by a 419-1 vote. The bill's backers say extending the law allows the U.S. to punish Tehran should the country fail to live up the terms of the landmark nuclear deal reached last year. In exchange for Tehran rolling back its nuclear program, the U.S. and other world powers agreed to suspend wide-ranging oil, trade and financial sanctions that had choked the Iranian economy.

"Now is not the time to ease up on the world's leading state sponsor of terrorism," said Rep. Leonard Lance, R-N.J. "Sanctions work."

The act, first passed by Congress in 1996 and renewed several times since then, expires at the end of the year. The bill approved by the House extends the law by 10 years, to 2026. There is widespread support in the Senate for passing the extension.