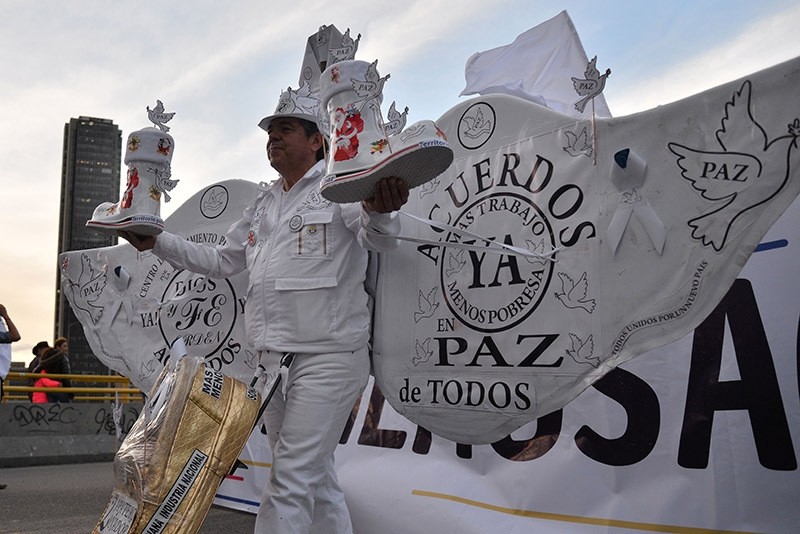 Four days after a new peace deal was signed to end a half century of fighting, renewed fighting erupted between security forces and FARC rebels, as two guerrillas belonging to the Revolutionary Armed Forces of Colombia were killed during clashes.

"Fighting took place in the south of the Bolivar department, and guerrillas who claimed to belong to the FARC were killed," the government's chief peace negotiator Humberto de la Calle told Caracol television.

"The Defense Ministry holds that there was an illegal operation there," he added.

The army confirmed the report of fighting, which comes in violation of a bilateral cease-fire in place since August. The army said in a statement that another suspected rebel who was detained said that he and the two killed were with the FARC's 37th Front.

The military also said, however, that locals insisted the insurgents were with the smaller National Liberation Army (ELN), which is often involved in kidnapping and extortion.

The government and the FARC had announced over the weekend a new peace deal to end more than half-a-century of violent civil strife. The Revolutionary Armed Forces of Colombia and Santos' government had been meeting since Oct. 22 to try to rescue a peace deal that has taken four years to negotiate. In an Oct. 2 referendum, voters unexpectedly rejected the peace agreement, deeming it too soft on the country's largest rebel group. The development was a blow to Santos, who won the Nobel Peace Prize last month for his efforts to bring "total peace" to Colombia.

The Colombian government and the ELN, the second largest guerrilla group, had planned to launch public peace talks on Oct. 27 in Quito. President Juan Manuel Santos cancelled the negotiations after the rebels failed to release hostage ex-congressman Otis Sanchez.

Both the FARC and ELN have used ransom kidnappings and drug trafficking to finance themselves over the years. The FARC is the oldest and largest group among Colombia's left-wing rebels and is one of the world's richest guerrilla armies. The group was founded in 1964, when it declared its intention to overthrow the government and install a Marxist regime. According to the Colombian security forces, there are around 7,000 active militants within the guerilla group. It is estimated that more than 8,500 civilians have given support to the group. However, the number went down gradually, as the number of active militants in 2002 was 20,000. The group was accused by human rights group of forcibly recruiting women and children especially under the age of 15.

FARC and ELN are the last two leftist guerrilla groups involved in a messy, multi-sided conflict in Colombia that has killed more than 260,000, while leaving left seven million displaced and 45,000 missing amid kidnappings, massacres and rape.