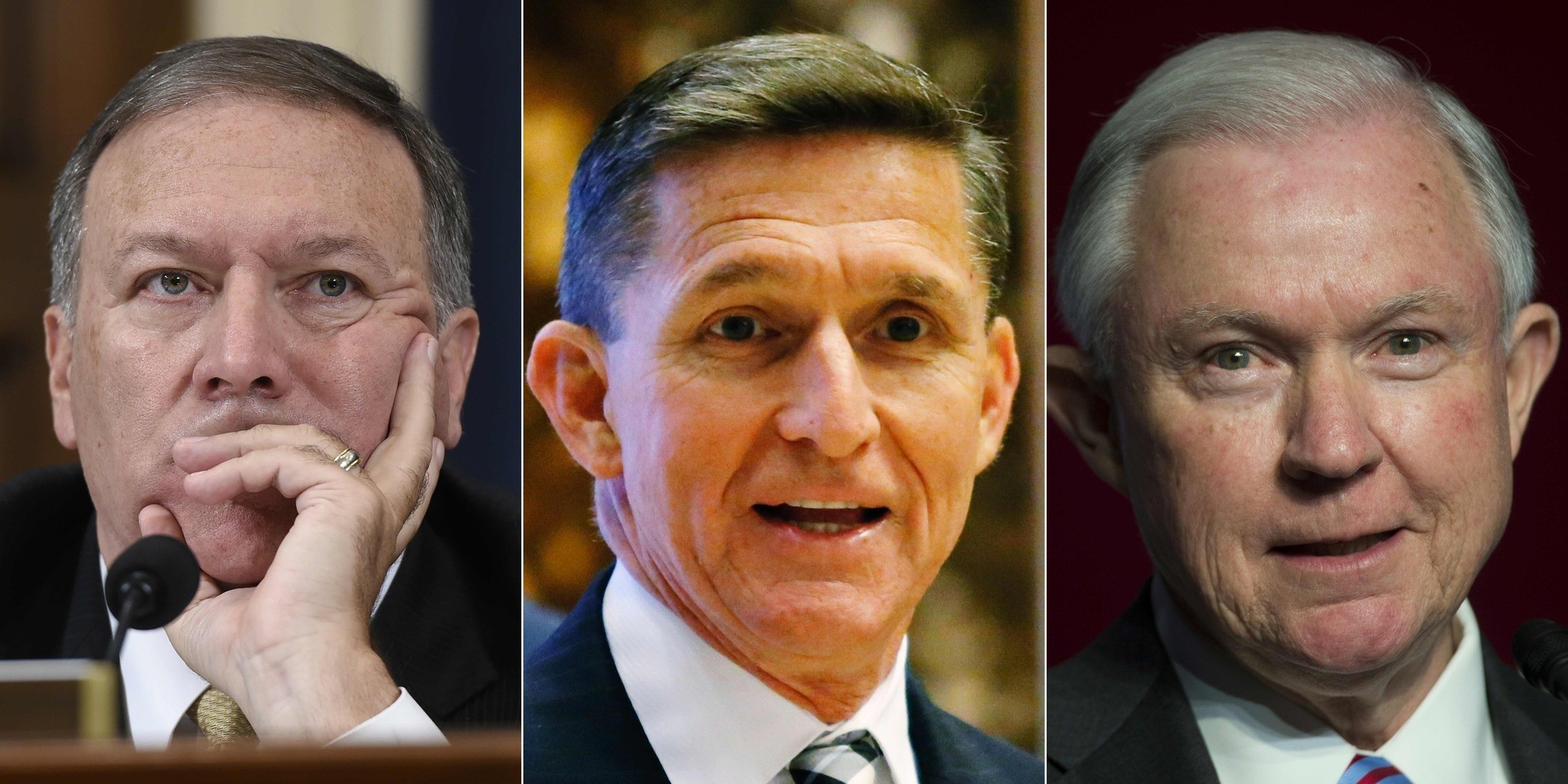 (L to R) US Representative from Kansas Mike Pompeo, Retired Lt. Gen. Michael Flynn and Senator Jeff Sessions.
by Compiled from Wire Services Nov 18, 2016 12:00 am
President-elect Donald Trump on Friday announced his selections for his top security posts, including the head of the Central Intelligence Agency (CIA), his national security adviser and attorney general.

Below are details about his selections:

Sessions, 69, was the first U.S. Senator to endorse Trump's presidential bid and has been a close ally since. A conservative from Alabama, he is serving his fourth term in the chamber, where he is a member of the Senate Judiciary Committee with oversight of federal courts, immigration, crime and terrorism.

The son of a country-store owner, he is a former Army Reserve captain and served as the U.S. Attorney for Alabama's Southern District under former President Ronald Reagan and later as Alabama's Attorney General.

Although he was confirmed by the Senate for his U.S. Attorney post in 1981, he was denied a federal judgeship in 1986 when a Senate panel failed to advance his nomination amid allegations he had made racially-charged remarks, which he denied.

Sessions must secure confirmation by the U.S. Senate to lead the Justice Department as attorney general, but he would only need to win majority support in the chamber, which is controlled by Republicans.

Sessions has long taken a tough stance on immigration, opposing any path to citizenship for undocumented immigrants. During the Republican George W. Bush administration, he blasted a bipartisan effort to create a guest-worker program for illegal immigrants backed by Bush.

Flynn, 57, was an early supporter of Trump and serves as vice chairman on his transition team.

Flynn helmed the Defense Department's intelligence arm from 2012 to 2014, but reportedly left after being pushed out of his post concerning disagreements with the White House about the prosecution of the anti-Daesh campaign.

Flynn was one of Trump's closest advisors during the presidential campaign and has been a key asset in forming Trump's security policies during the transition.

He was previously thought to be in the running for defense chief, but a U.S. legal regulation prohibits his appointment due to a requirement that any defense chief be out of the military for seven years before assuming the Pentagon's top spot.

Flynn wrote an article in which he stressed the importance of Turkey's role in the region and advocated for FETÖ ringleader Fetullah Gülen's extradition to Turkey. He said the issue was one of the key points of contention between Washington and Ankara

Pompeo, 52, is a third-term congressman from Kansas who serves on the U.S House Select Intelligence Committee, which oversees the CIA, National Security Agency (NSA) and cyber security. Pompeo also was a member of the House Select Committee on Benghazi investigating the 2012 attack on a U.S. compound in Libya. The California native graduated first in his class from the U.S. Military Academy at West Point and served as a platoon leader in the U.S. Army before leaving military as a captain to attend Harvard Law School.

In 1996, he moved to Kansas to launch an aircraft parts company. The firm's decision to open a factory in Mexico came under fire when Pompeo later ran for public office. Pompeo defended his work, saying the company had created jobs in the state. His ties to Koch Industries, owned by billionaire conservative donors Charles and David Koch, has also drawn scrutiny. He won re-election in the Nov. 8 election with 61 percent of the vote, according to Kansas's unofficial election results online.

Pompeo has been critical of former U.S. intelligence contractor Edward Snowden who leaked National Security Agency information, saying in a 2014 letter that his telecast appearance at an event undermined the ideals of "fairness and freedom."
Last Update: Nov 19, 2016 9:55 am
RELATED TOPICS