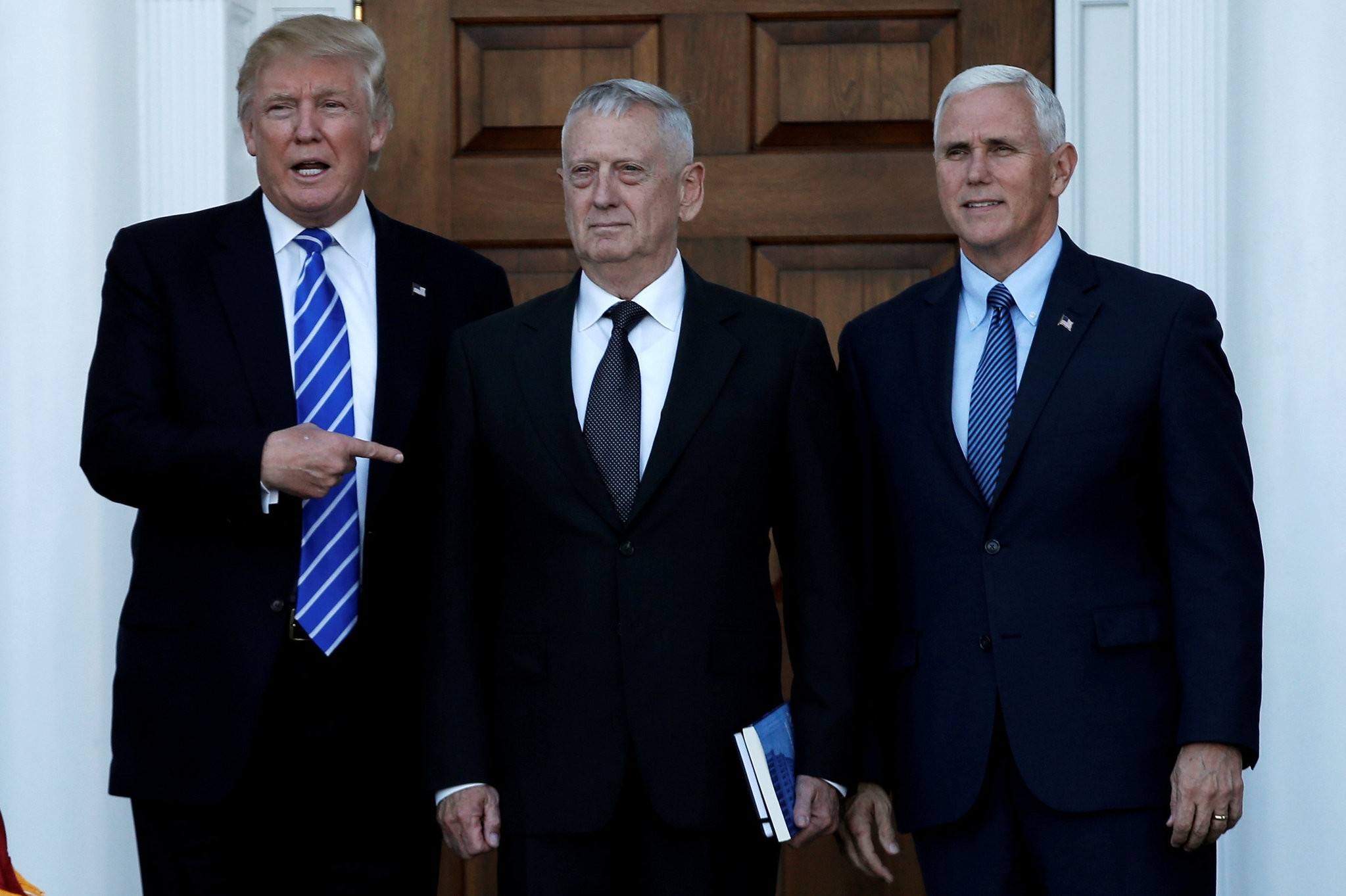 US President-elect Donald Trump praised James Mattis as a potential defense secretary Sunday, calling the retired military commander a "true general's general" as he prepared to meet another batch of possible cabinet members at his New Jersey golf club.

Trump's recent choices for other key posts -- attorney general, national security adviser and chief White House strategist -- have come under fire on civil rights grounds from Democrats and other critics.

But Trump has also moved to mend fences with moderate Republicans as he goes about building a new administration, interviewing one-time foe Mitt Romney for secretary of state, and inviting his ousted transition chief Chris Christie for a sit-down Sunday at his Trump National Golf Club.

He and Vice President-elect Mike Pence began their day attending a Sunday service at a Presbyterian church in the New Jersey countryside.

But the early-rising Trump was on Twitter before that, attacking the cast of hit Broadway musical "Hamilton" as rude, and "Saturday Night Live," the late-night satirical show that mercilessly lampoons him, as "not funny at all."

Meanwhile, the New York Post reported that Melania Trump and son Barron will remain in New York, rather than live in the White House.

Jason Miller, a Trump spokesman, would not confirm the report, but told reporters that "there's obviously sensitivity to pulling their 10-year-old out of school in the middle of the school year. A more formal statement will be coming."

The 70-year-old Republican billionaire promised reporters they would "hear some things" after a second marathon day of meetings at his New Jersey golf retreat, a 90-minute drive from Manhattan.

"General James 'Mad Dog' Mattis, who is being considered for Secretary of Defense, was very impressive yesterday. A true General's General!" Trump said on Twitter.

The 66-year-old Mattis, who called Trump "the real deal" after their meeting Saturday, is a retired Marine Corps general who led the US Central Command from 2010-2013, overseeing the US withdrawal from Iraq and a surge in Afghanistan.

A colorful combat commander and voracious reader, he has been quoted as saying, "Be polite, be professional, but have a plan to kill everyone you meet."

Chris Christie, who threw his support to Trump after his own bid for the Republican presidential nomination fizzled, appeared back in favor after being pushed out as transition chief.

The New Jersey governor has been under a cloud over a scandal involving the closing of a major bridge linking New York and New Jersey, allegedly to punish a Democratic mayor. Two former Christie aides were recently convicted in the case.

Asked on Saturday if "Bridgegate" disqualified the governor from serving in the cabinet, Trump retorted: "We like Chris a lot."

Trump will also meet with Bob Johnson, the founder of Black Entertainment Television (BET) who has urged African Americans to vote for their best interests rather than be wedded to any political party.

Trump's interview with Romney, the 2012 Republican presidential candidate who called him a "fraud" during the campaign, suggested to some observers that he is looking for a mix of views despite the hard-line cast of his national security team so far.

Romney himself said nothing after Saturday's session. But Pence confirmed that Romney was under consideration for secretary of state, a post also sought by Giuliani and others.

Trump, who was spending his first weekend outside Manhattan since his November 8 election -- other than a trip to Washington to meet Obama -- had not appeared in public since he gave reporters the slip to take his family to dinner in New York on Tuesday.

He has, however, been active on Twitter, a forum where he has won fans -- and detractors -- with his provocative, off-the-cuff messaging.

He lashed out at the cast of the award-winning Broadway musical "Hamilton" after Pence was booed at a performance on Friday and the lead actor read out an appeal for the new administration to "work on behalf of all of us."

"The cast and producers of Hamilton, which I hear is highly overrated, should immediately apologize to Mike Pence for their terrible behavior," Trump wrote early Sunday, in his third tweet on the subject.

Also on Twitter, he said he had settled three class-action lawsuits over his now-defunct Trump University for $25 million so that all his energy could be focused on his new job, dismissing any hint of guilt.