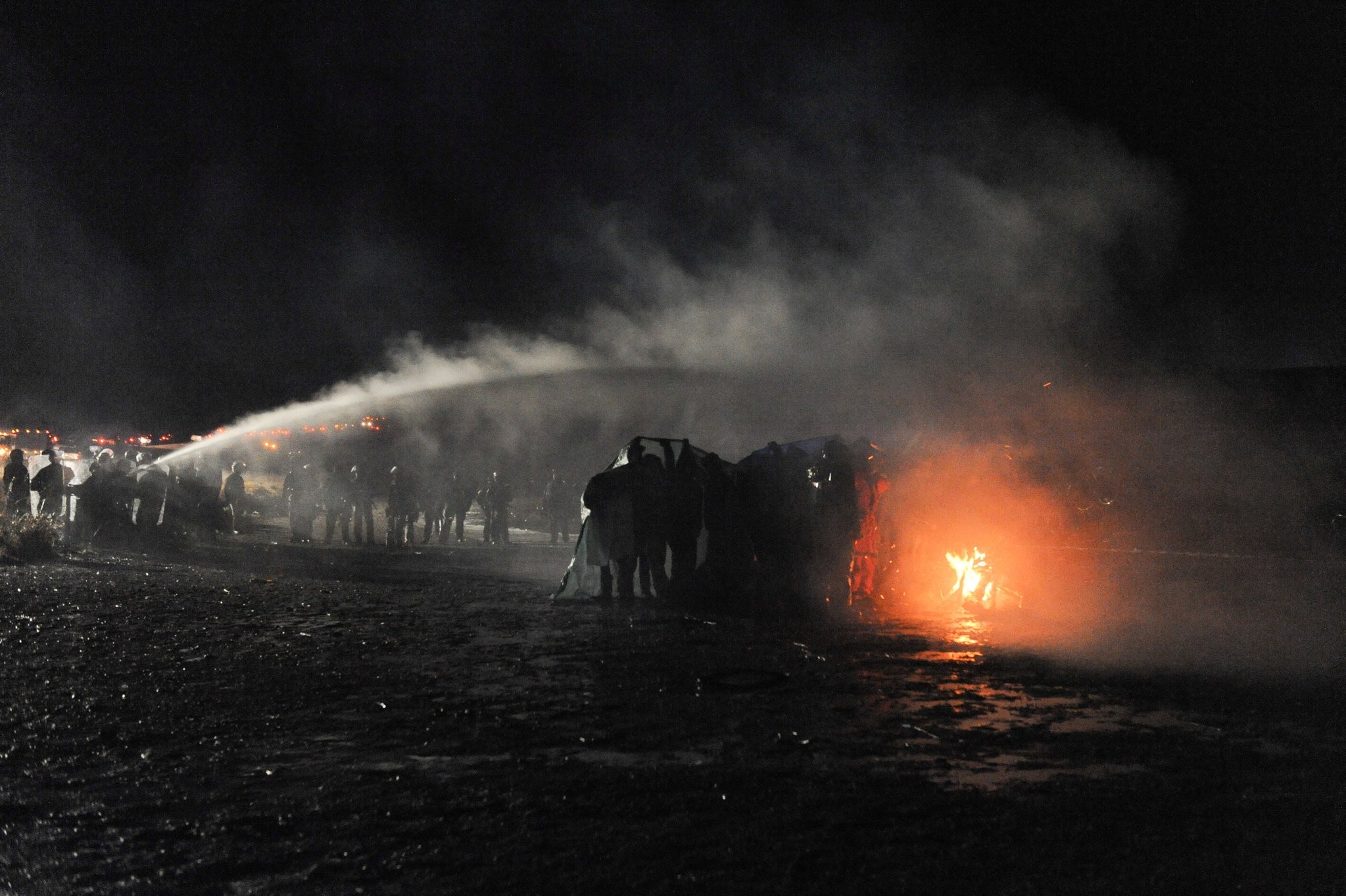 Police use a water cannon to put out a fire started by protesters during a protest against plans to pass the Dakota Access pipeline near the Standing Rock Indian Reservation. (REUTERS Photo)
by reuters Nov 21, 2016 12:00 am

Police fired tear gas and water at hundreds of protesters in North Dakota opposed to an oil pipeline in freezing weather late Sunday and early Monday, in the latest violent clash between law enforcement and activists over the $3.7 billion project.

An estimated 400 protesters mounted the Backwater Bridge just north of Cannon Ball, North Dakota, and attempted to force their way past police in what the Morton County Sheriff's Department initially described as an "ongoing riot."

A joint statement from several activist groups said protesters were trying to remove the burned vehicles blocking Backwater Bridge in order to restore access to the nearby Standing Rock encampments so emergency services and local traffic can move freely.

Police fired volleys of tear gas at the protesters to prevent them from crossing the bridge. Law enforcement also sprayed protesters with water in sub-freezing temperatures, and fired rubber bullets, injuring some in the crowd.

"It is below freezing right now and the Morton County Sheriff's Department is using a water cannon on our people - that is an excessive and potentially deadly use of force," said

Dallas Goldtooth, a spokesman for the Indigenous Environmental Network, one of the organizations involved in protests.

A statement from the sheriff's' department said one arrest had been made by 8:30 p.m. local time (0230 GMT Monday), about 2-1/2 hours after the incident began 45 miles (30 miles) south of Bismarck, the North Dakota capital. About 100 to 200 protesters remained after midnight.

The protest was latest in a series of demonstrations against the Dakota Access Pipeline that Native American activists and environmentalists say threatens water resources and sacred tribal lands.

The Dakota Access project has drawn steady opposition from activists since the summer, led by the Standing Rock Sioux tribe, whose tribal lands are adjacent to the pipeline.

Supporters of the pipeline, owned by Energy Transfer Partners, said the project offers the most direct route for taking shale oil from North Dakota to Gulf Coast refineries and would be safer than road or rail transportation.

Completion of the pipeline, set to run 1,172 miles (1,185 km) from North Dakota to Illinois, was delayed in September so federal authorities could re-examine permits required by the Army Corps of Engineers. A final decision on the permit has been deferred for more consultation with the tribe.

The latest confrontation began after protesters removed a truck that had been on the bridge since Oct. 27, police said. The North Dakota Department of Transportation closed the Backwater Bridge, which crosses Cantapeta Creek north of the Standing Rock Sioux tribe's camp, due to damage from that incident.

The Morton County Sheriff's Department said officers on the scene of the latest confrontation were "describing protesters' actions as very aggressive."

Demonstrators tried to start about a dozen fires as they attempted to outflank and "attack" law enforcement barricades, the sheriff's statement said. Police said protesters had hurled rocks, striking one officer, and fired burning logs from slingshots.