Post-election hate crimes on rise in US, Muslims become vulnerable to threats 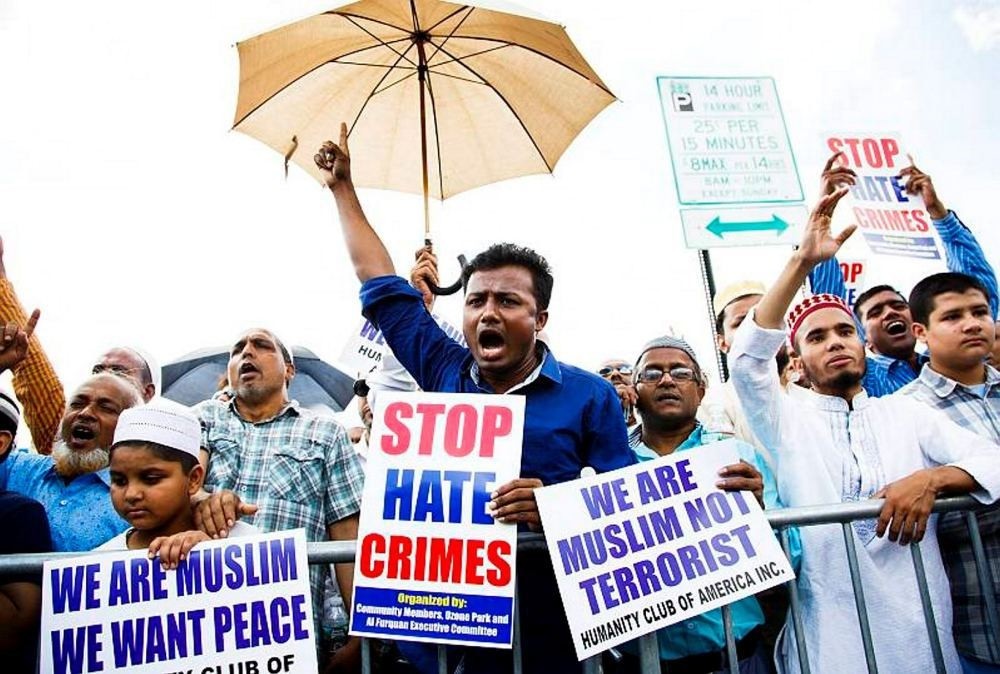 More than 100 anti-Muslim incidents have been reported across the country since the U.S. presidential election on Nov. 8.
by Compiled from Wire Services Dec 01, 2016 12:00 am

More than 860 bias-related incidents were recorded in the 10 days following the U.S. presidential election as Muslims become the main target of hate crimes with a series of threatening letters sent to mosques across the country

An advocacy group reported on Tuesday that nearly 900 incidents of hate and intolerance were recorded across the United States in the days following November's presidential election, mainly targeting minority groups in the country. "I have no doubt whatsoever that this is a tremendous, tremendous undercount," said Richard Cohen, president of the Southern Poverty Law Center, which monitors hate crimes.

The group recorded 867 cases of harassment and intimidation in the 10 days following Donald Trump's election, which was cheered by white supremacists and others fired up by his rhetoric disparaging immigrants, Muslims and women. Most incidents involved graffiti or verbal harassment, although a small number were violent physical altercations. Slightly more than half of the cases were anti-immigrant or anti-black. The incidents were reported in nearly every state in the country, led by California with 99 cases.

The FBI earlier this month reported that hate crimes against Muslims in the United States surged 67 percent in 2015 — the highest level since the aftermath of the Sept. 11, 2001 terror attacks. The bureau's Uniform Crime Report documented 257 anti-Muslim hate crimes, up from 154 in 2014.

Trump railed against Muslims and immigrants during the presidential campaign and since his election on Nov. 8, more than 100 anti-Muslim incidents have been reported across the country, said the Council on American-Islamic Relations (CAIR).

Authorities in Los Angeles said on Monday they were actively seeking the authors of a series of threatening letters sent to mosques in the area and urged anyone who had received similar messages to come forward. The letters, which were addressed to "the children of Satan," called Muslims "vile and filthy people" while praising President-elect Donald Trump and vowing they were "going to do to you Muslims what Hitler did to the Jews." They were sent to three mosques in California and one in Georgia.

"Your day of reckoning has arrived," CAIR, an advocacy organization for Muslims in the U.S., quoted the letter as saying. "There's a new sheriff in town - President Donald Trump. He's going to cleanse America and make it shine again. And, he's going to start with you Muslims." The author or authors signed the letter "Americans for a Better Way." While the handwritten messages contained "awful, awful language," the messages did not contain a specific threat and as such did not constitute a hate crime, said Stephen Woolery, head of the FBI's counterterrorism division in Los Angeles.

Meanwhile, there were 80 recorded instances of swastikas scrawled onto public spaces, schools, cars and garage doors. In Vermont, the front doors of a synagogue were defaced with swastikas.

Trump has faced calls to distance himself from the so-called "alternative right" (alt-right) - and the pressure became acute after members of the white nationalist movement were caught on film celebrating his victory with Nazi salutes. He finally did so in an interview with the New York Times last week, saying: "I don't want to energize the group, and I disavow the group." But Trump's choice of chief strategist, Steve Bannon, remains closely identified with the "alt-right." His attorney general nominee Sen. Jeff Sessions has been accused of racism and his national security adviser, retired lieutenant Michael Flynn, has promoted anti-Muslim conspiracy theories.
Last Update: Dec 01, 2016 2:12 am
RELATED TOPICS