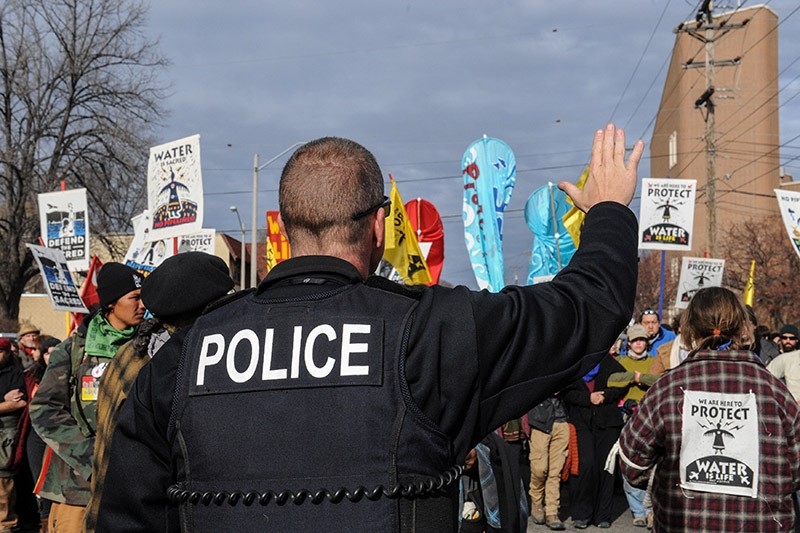 A police officer stands guard as people march during a protest against plans to pass the Dakota Access pipeline near the Standing Rock Indian Reservation, North Dakota, U.S. November 14, 2016. (Reuters Photo)
by Daily Sabah Dec 03, 2016 12:00 am

Canadian photojournalist Edward Ou was denied entry to the United States and was detained for several hours, a report by the Washington Post said.

The reporter was travelling to North Dakota in order to cover the Dakota Access Pipeline protests, but U.S. border agents detained him for more than six hours and confiscated his phone and reporting materials including his camera, before they barred him from entering the U.S.

The award-winning photojournalist stated that he had terrible experiences working in the Middle East over the past ten years; however his most disturbing encounter was with the U.S. border security.

This treatment has alarmed legal experts and free speech advocates who said that the American government has grown more and more hostile towards the press, in contradiction to the country's press freedom laws.

The U.S. police treated protesters harshly and confrontations between the Native Americans and the police escalated, leading to hundreds of detentions.

The Standing Rock Sioux Tribe, whose reservation is close to the planned pipeline's route, rejects the project as it will endanger the tribe's water supply by crossing the nearby Missouri River, and destroy sacred Native American sites.

The incident received international attention at its start, whereas mainstream media coverage in the U.S was limited.