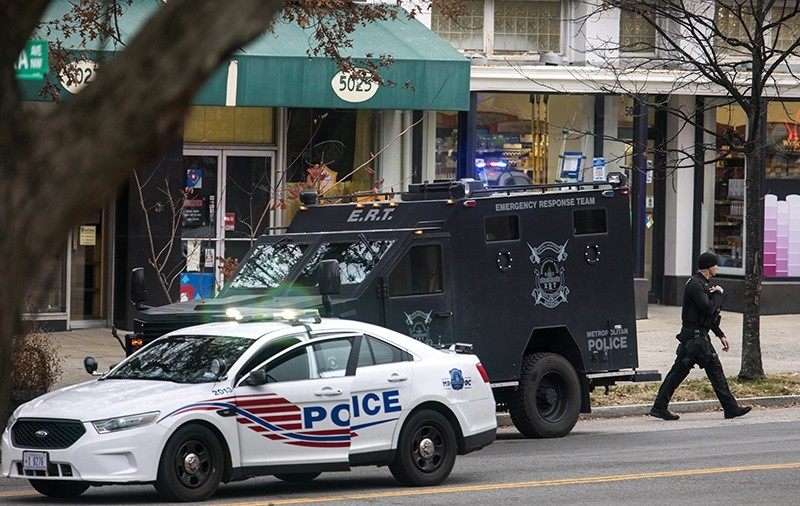 Police surround Comet Ping Pong, a pizza restaurant that was the subject of claims it was the center of a child sex ring orchestrated by Hillary Clinton and her campaign chief, John Podesta (EPA Photo)
by Associated Press
Dec 05, 2016 12:00 am

A man who said he was investigating the 'pizza gate' story, referred to as a conspiracy theory by Western media outlets, about Hillary Clinton running a child sex ring out of a pizza place fired an assault rifle inside the Washington, D.C., restaurant on Sunday injuring no one, police and news reports said.

Metropolitan Police Department spokeswoman Aquita Brown said police received a call Sunday afternoon about a male with a weapon on Connecticut Avenue, in an affluent neighborhood of the nation's capital.

Edgar Maddison Welch, 28 of Salisbury, North Carolina, walked into the front door of Comet Ping Pong and pointed a firearm in the direction of a restaurant employee, the Washington Post reported.

The employee was able to flee and notify police. Welch then fired the gun into the floor.

Police responded and arrested Welch without incident. They recovered an "assault rifle," Brown said. Welch was charged with assault with a dangerous weapon.

Two firearms were recovered inside the restaurant and an additional weapon was recovered from the suspect's vehicle, police said in a statement on Sunday evening.

The Comet Ping Pong is in a neighborhood of well-tended private homes and apartment buildings on leafy streets that lead to a mix of shops, restaurants and the Politics and Prose book store. The restaurant gained notoriety during the presidential campaign after fake news stories stated that Hillary Clinton and her campaign chief ran a child sex ring out of the restaurant, The New York Times and other news organizations have reported.

Welch told police he'd come to the restaurant to "self-investigate" the 'pizza gate scandal' that spread online during Clinton's run for the White House, the police statement said.

The Comet, its owner, staff and nearby businesses were caught up in an onslaught of conspiracy theories and fake news during the often contentious presidential campaign and were the victims social media attacks and death threats, the Post reported.

"There will be a time and a place to address how and why this happened in greater detail but for now I will simply say we should all condemn the efforts of some people to spread malicious and utterly false accusations about Comet Ping Pong," owner James Alefantis told WUSA-TV.