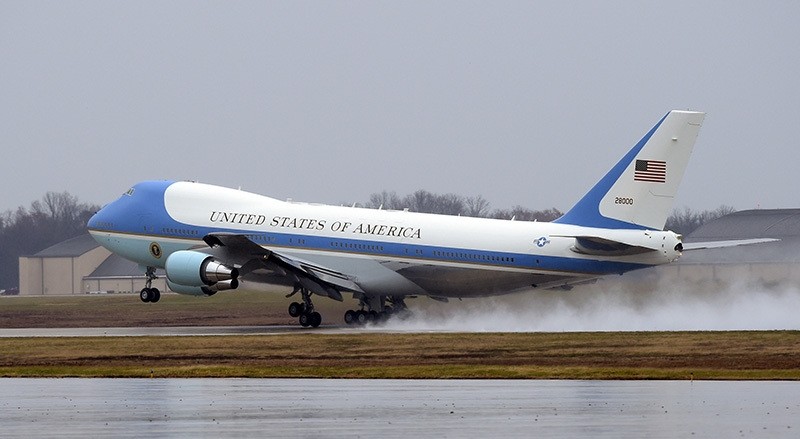 Air force One, with President Barack Obama aboard, takes off from Andrews Air Force Base, Md., Tuesday, Dec. 6, 2016 (AP Photo)
by Dec 06, 2016 12:00 am
U.S. President-elect Donald Trump threatened Tuesday to cancel the planned purchase of new presidential planes because of cost overruns.

"Boeing is building a brand new 747 Air Force One for future presidents, but costs are out of control, more than $4 billion. Cancel order!" Trump wrote on Twitter.

The US Air Force announced last year that Boeing would build a new fleet of two modified 747-8 aircraft for presidential use beginning in 2024 as the current fleet reaches the end of its lifespan.

A report by the Government Accountability Office pegs the total programme cost at 3 billion dollars over a decade until the end of 2020.

Boeing's contract is worth 170 million dollars, the company said in a statement.

"We look forward to working with the US Air Force on subsequent phases of the programme allowing us to deliver the best planes for the president at the best value for the American taxpayer."

Trump did not specify his source on the cost overruns for the plane, which requires a raft of special equipment to allow the president to fly around the world and have access to the same information as in the White House.

Trump's aides did not provide additional details about Trump's figures, stressing the statement was part of a broader commitment to save taxpayers money.

Spokesman Jason Miller told reporters that Trump did not currently own any stock in Boeing, announcing that he had sold all of his stock in June. Details of the transaction or why Trump had chosen to sell the assets at that time were not known, but presidents routinely divest of such investments in order to avoid conflicts of interest.

"The plane is totally out of control," Trump told reporters in the lobby of Trump Tower in New York.

"It's going to be over 4 billion dollars for the Air Force One programme and I think it's ridiculous. I think Boeing is doing a little bit of a number. We want Boeing to make a lot of money, but not that much money."

The costs of presidential transportation have regularly raised questions.

President Barack Obama scrapped a costly programme to build new presidential helicopters shortly after taking office, prompting an outcry from the defence industry over the loss of jobs at the factory that was to build the Marine One craft. The Pentagon has since revived the replacement of the helicopter fleet.
Last Update: Dec 06, 2016 10:03 pm
RELATED TOPICS