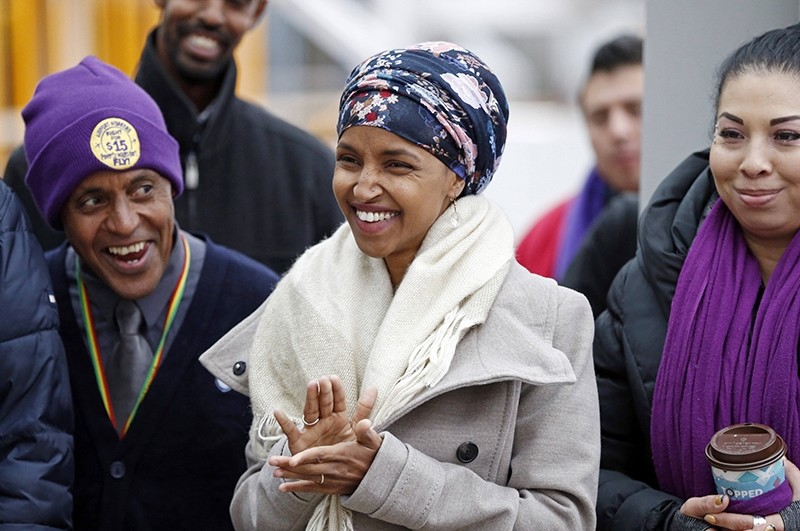 In this Tuesday, Nov. 29, 2016 file photo, Ilhan Omar, center, applauds during a rally at the Minneapolis-St. Paul International Airport in Minneapolis (AP Photo)
by Compiled from Wire Services Dec 08, 2016 12:00 am

The nation's first elected Somali-American lawmaker says she was harassed and called "ISIS" by a taxicab driver in Washington, D.C.

Minnesota Rep.-elect Ilhan Omar detailed the incident on her Facebook page on Wednesday. She said the cab driver called her Daesh, lobbed sexist taunts and threatened to remove her hijab during a brief ride on Tuesday after a White House meeting on criminal justice reform. She did not provide information about the driver.

Omar, 33, says she is troubled by growing animosity toward Muslim people. Her campaign staff did not immediately respond to a request for comment.

Omar immigrated to the United States after spending part of her childhood in a Kenyan refugee camp. She won a Minnesota House seat this fall and will be sworn into office Jan. 3.

The FBI last month reported that hate crimes against Muslims in the US surged 67 percent in 2015 -- to the highest level since the aftermath of the September 11, 2001 terror attacks.

The bureau's Uniform Crime Report documented 257 anti-Muslim hate crimes, up from 154 in 2014.

Trump railed against Muslims and immigrants during the presidential race. In its final week the real estate magnate had targeted the Somali community in the state, where he ultimately lost to his Democratic rival Hillary Clinton 45 to 47 percent.

Nearly a third of Somali refugees resettled in the United States live in Minnesota. They number around 25,000 according to 2010 data, the latest available.