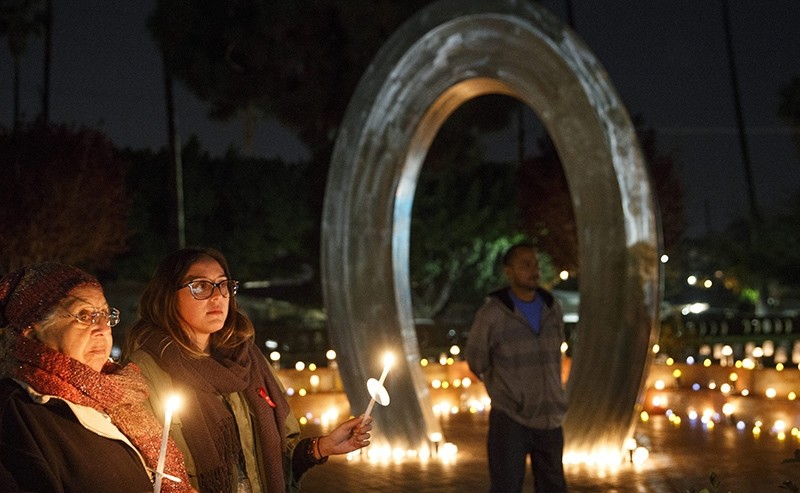 Visitors gather with candles near a memorial stainless steel arch during a World AIDS Day event at the Las Memorias AIDS Monument in Los Angeles, California USA, 01 December 2016 (EPA Photo)
by Dec 08, 2016 12:00 am

Life expectancy in the United States dropped last year for the first time since the peak of the HIV/AIDS crisis more than 20 years ago, as deaths rose from nearly every major cause, federal data showed Thursday.

The total US population's life expectancy in 2015 was 78.8 years, a decrease of 0.1 year from 2014, said the report by the National Center for Health Statistics.

Deaths from eight of the top 10 causes mounted, including spikes in accidental deaths among children and deaths from Alzheimer's disease in the elderly.

The report did not delve into the reasons for the across-the-board decline in life expectancy from birth, but experts pointed to economic struggles, drug addiction and the increasing burden of dementia on an aging population as potential factors.

"This is unusual," said lead author Jiaquan Xu, an epidemiologist at the NCHS, which is part of the US Centers for Disease Control and Prevention.

It "looks like much more death than we have seen in the last few years."

The last time life expectancies at birth dropped for the total US population was in 1993, a year when the deaths from AIDS reached a peak in the United States, compounded by a bad flu year that resulted in more flu and pneumonia deaths, he said.

Homicide and accidental death rates also went up that year.

For 2015, the data also showed a 1.2 percent increase in the death rate for the total population, and this "rose significantly for the first time since 1999," noted the report.

The overall downward trend in America stands in sharp contrast to the situation worldwide, where global life expectancy has increased five years from 2000 to 2015, according to the World Health Organization.

Women in Japan currently have the longest average lifespan at 86.8 years, while men in Switzerland can anticipate 81.3 years.

Sierra Leone has the lowest life expectancy, with women at 50.8 years and men at 49.3.

In the United States, life expectancy has stagnated nationwide in recent years.

Federal data from 2014 showed a slight downturn in life expectancy for white people, which experts said could be due to rising drug abuse -- particularly the prescription painkiller epidemic -- and poverty.

But this year, there was no single cause.

Deaths from Alzheimer's disease rose 15.7 percent in a single year.

"Such a dramatic rise is a profound reminder of how devastating this condition has become," said Keri Peterson, a doctor at Lenox Hill Hospital in New York who was not involved in the report.

Among adults, there was a 6.7 percent increase in deaths from "unintentional injuries."

Another alarming finding was the rise in infant deaths, where data showed an 11.3 percent increase in the rate of death for babies under age one due to unintentional injuries.

"Most of them died from accidental suffocation and strangulation in bed," said Xu, noting that these injuries are classified separately from sudden infant death syndrome.

SIDS, meanwhile, rose to the third top cause of infant mortality, up from fourth place in 2014.

"We know that unintentional injuries in children are complicated," said Michael Grosso, medical director at Northwell Health's Huntington Hospital in New York, noting that they can include car crashes, falls, suffocation, fires and smoke-related injuries.

"Accidental injury really relates to social stressors," such as financial pressures and addiction, he told AFP.

"The dramatic upswing in the use of opiates and narcotic use across our country is potentially a big factor in driving a phenomenon like accidental injury."

The rate of cancer deaths decreased 1.7 percent, and influenza and pneumonia deaths were unchanged.

"The only good news we see in 2015 was that the cancer death rate continued to decrease," said Xu.