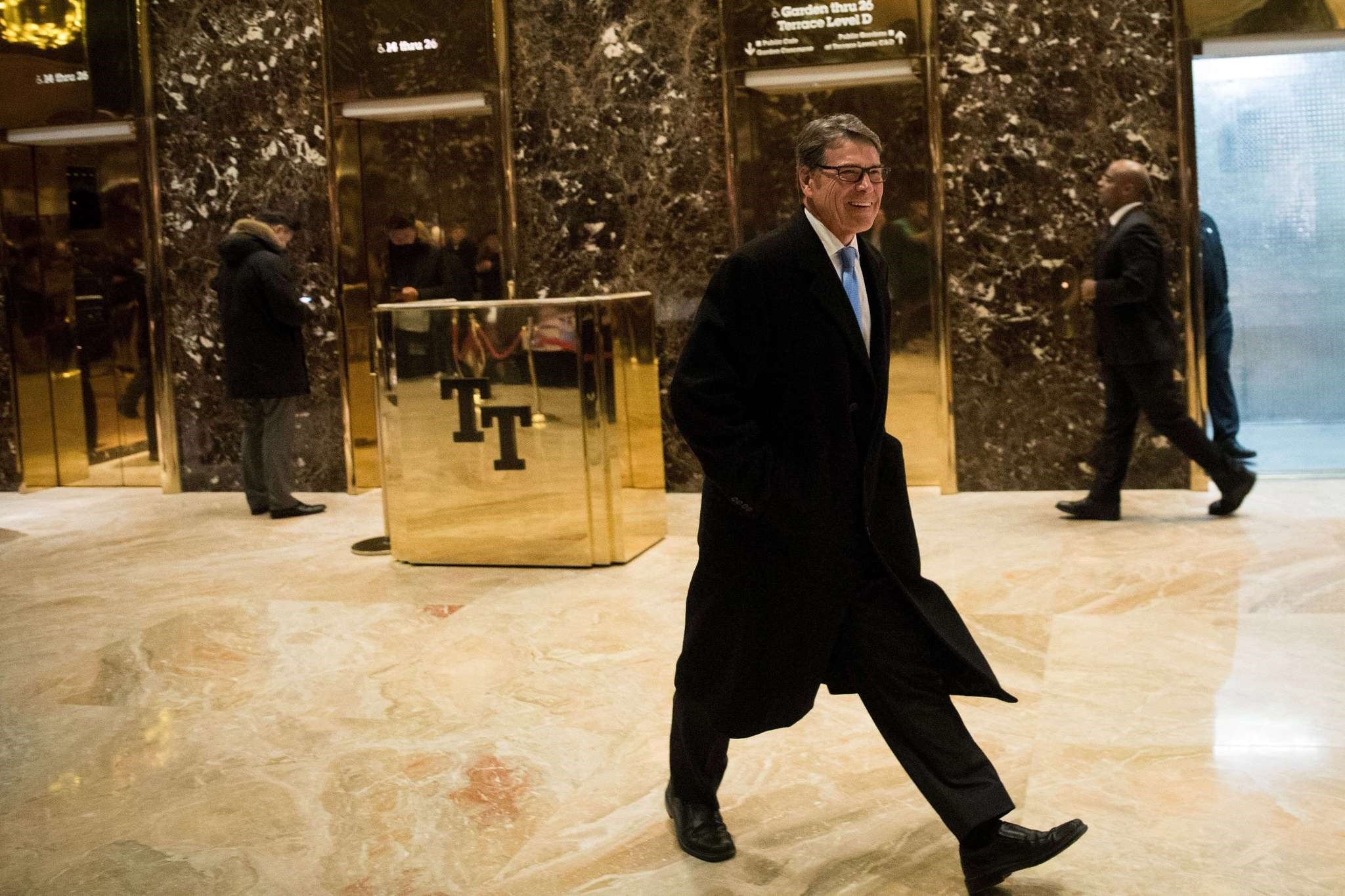 Former Texas Governor Rick Perry walks through the lobby on his way out of Trump Tower, December 12, 2016 in New York City. (AFP Photo)
by Dec 13, 2016 12:00 am
U.S. President-elect Donald Trump has chosen former Texas Governor Rick Perry to head the U.S. Department of Energy, a transition official said, putting him in charge of the agency he proposed eliminating during his bid for the 2012 Republican presidential nomination.

The choice, confirmed late on Monday by the official, adds to the list of oil drilling advocates skeptical about climate change who have been picked for senior positions in Trump's Cabinet. The selections have worried environmentalists but cheered an industry eager for expansion.

Perry's proposal to scrap the Energy Department caused what has become known as his "oops" moment during a November 2011 debate when he could not remember all the Cabinet-level departments he wanted to eliminate.

"It's three agencies of government when I get there that are gone: commerce, education and the um, what's the third one there? Let's see," Perry said.

His debate opponents tried to prod his memory but Perry ultimately gave up, saying, "I can't. The third one, I can't. Sorry. Oops."

Perry, who also briefly ran in the 2016 presidential race, would have to be confirmed by the Senate to head the Energy Department, which is responsible for U.S. energy policy and oversees the nation's nuclear weapons program.

Perry served as governor of Texas, a leading oil-producing state, from 2000 when he succeeded President George W. Bush until 2015. In his unsuccessful presidential runs, he touted his record of job creation in the second-most-populous state.

Perry was a fierce critic of Trump last year before dropping out of the race, calling him "a cancer on conservatism" who offered "a toxic mix of demagoguery and mean-spiritedness and nonsense."

Trump also had harsh things to say about Perry during the campaign, even belittling his eye glasses by saying, "He put on glasses so people will think he's smart."

Once Trump secured the nomination, Perry endorsed him as "the people's choice."

If Perry gets the job, it would be further indication that the incoming Trump administration may be friendly toward the fossil fuel industry. Perry has advocated lighter regulation on the industry, and has said that the science around climate change is "unsettled."

Trump is set to pick U.S. Representative Cathy McMorris Rodgers, who is also a climate-change skeptic and an advocate for expanded oil and gas development, to head the Interior Department.

Trump's pick for the Environmental Protection Agency is Oklahoma Attorney General Scott Pruitt, an ardent opponent of President Barack Obama's measures to curb climate change who has sued the EPA to block in a bid to undo a key regulation to curb greenhouse gas emissions, mainly from coal-fired power plants.