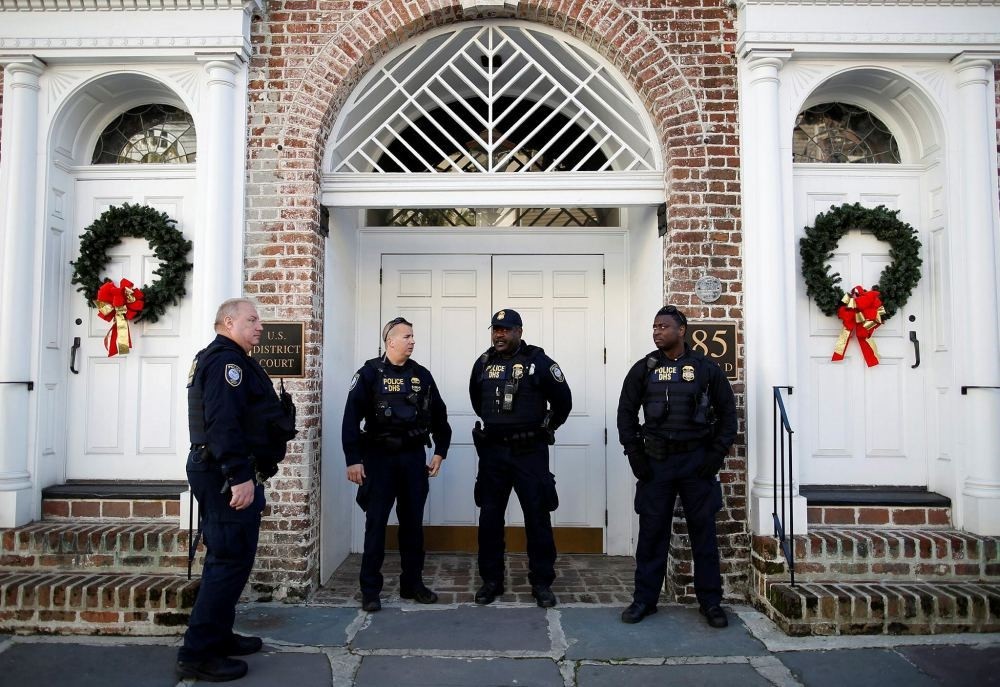 Department of Homeland Security officers stand outside the Charleston Federal Courthouse during the federal trial of Dylann Roof in South Carolina, Dec. 15.
by Daily Sabah Dec 17, 2016 12:00 am

As Dylan Roof, the avowed white supremacist, was found guilty for killing nine black parishioners, he faces either the death penalty or life imprisonment for his crimes. The Charleston Church massacre is the biggest recent example of rising hate crimes in the U.S.

Dylan Roof, who considers himself a white supremacist, was convicted in the chilling slaughter of nine black church members in Charleston, South Carolina, a devastating crime in a country that was already deeply embroiled in rising hate crimes. Roof admitted to the murders and as is stated in his own manifesto the shooting was racially motivated. Roof has been found guilty on all charges and is now on trial to determine whether he will receive the death penalty.

The FBI has reported that 57 percent of the reported instances were racially motivated while 20 percent were religiously motivated of the 5,850 reports in total and these are just the numbers coming out of the United States.

In the United States, the Alt-Right (Alternative Right) think tank "National Policy Institute" and its founder Richard Spencer who recently incited controversy in the latest NPI Conference in Washington D.C. after having said "Hail Trump" at the end of his speech, which was followed by three or four out of the dozens in the audience to perform the infamous Roman Salute, are now mostly associated with the Adolf Hitler's National Socialists and Neo-Nazis. Spencer later defended his actions, saying: "It's about throwing it back in their face. Whenever there's an authentic movement of identity that is coming from Europeans, European-Americans, you know, we've heard it all before, 'You're literally Hitler, you're literally the KKK, you're literally the Southern Confederacy' and so on and so forth, and I think that at some point you just want to through it back at their face."

He also added that there is a "silver lining to all of this", "our ideas are invading the mainstream," meaning that Spencer thinks all the public exposure is a positive thing. Spencer also claimed in the conference that the NPI needs to be an "Intellectual vanguard" to the Alt-Right, so as to protect its ideals and not let it erode.

The divisive U.S. presidential election has also helped the rise of the Alt-Right in the United States.

Donald Trump's surprise campaign announcement in June of 2015 significantly boosted the then so-called Alt-Right over the coming months. If Trump said something controversial the internet would immediately pick it up, amplify it, make it a meme and through it right back to the mainstream were it gained even more traction and generated more controversy, thus making Trump even more popular.

Hillary Clinton made an infamous speech in which she said, "you could put half of Trump's supporters into what I call the basket of deplorables. Right? They're racist, sexist, homophobic, xenophobic, Islamaphobic, you name it." After these comments Trump supporters proudly declare themselves to be "Deplorables". Richard Spencer's "Heil Trump" has achieved similar traction online.

The past two years have seen hate crimes and acts of terror performed by racists, Islamists, mentally-ill people, fueling the rise of Nationalistic elements in the U.S.

In fact, the New American Foundations claims that White Supremacists have been responsible for more deaths in the United States than Islamists after 9/11, citing several examples such as the Wisconsin Sikh temple shooting in 2012. Attacks such as the San Bernardino shooting or the Boston Marathon in 2013 also received a lot of public attention.
RELATED TOPICS