Electors to cast final votes in US presidential election 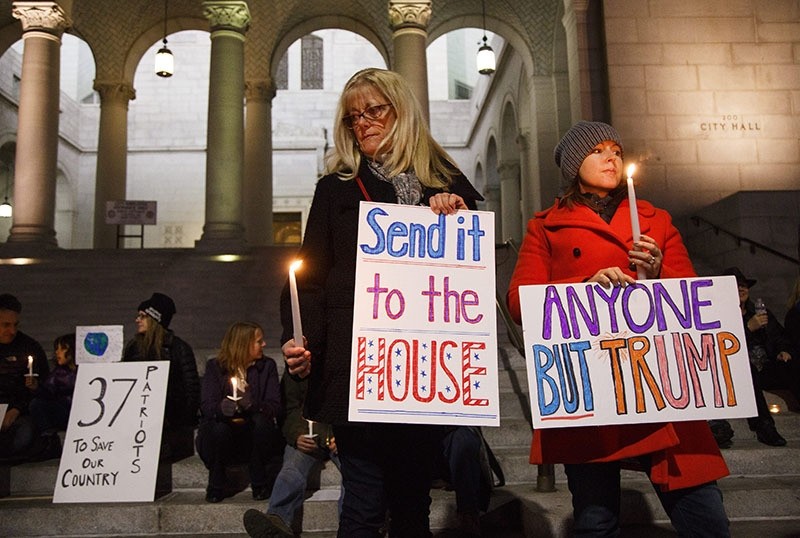 Protestors opposed to US President-elect Donald Trump petition to the Electoral College on the eve of its vote during a candlelight vigil in Los Angeles, California USA, 18 December 2016. (EPA Photo)
by Compiled from Wire Services Dec 19, 2016 12:00 am

The final stage of the US presidential election will take place Monday when the 538 members of the Electoral College meet in their respective states to cast the definitive vote.

Following past elections, the Electoral College vote has been little more than a formality, but the spotlight is on the body this year because of appeals for electors to vote against president-elect Donald Trump.

Trump is nevertheless expected to win a majority in the Electoral Collage and seal his victory in the November 8 election. Trump won 306 Electoral College votes in the election, a clear majority even though he lost the nationwide popular vote to Hillary Clinton.

Electors have been flooded with emails and telephone calls pressuring them not to vote for Trump, according to media reports. In addition, nearly 5 million people have signed an online petition on the website change.org aimed at preventing Trump from becoming president.

"We are calling on 'conscientious electors' to protect the Constitution from Donald Trump, and to support the national popular vote winner," the petition reads.

But there is no sign of a revolt large enough to reverse the election outcome. Even if some electors vote against him, Trump's 306 Electoral College votes top Clinton's 232 and provide him with a sufficient cushion to reach the required 270 majority.

The number of Electoral College electors equals the number of representatives and senators in Congress, with each state receiving a share roughly proportional to its population size.

When voters go to the polls to cast a ballot for president, they are actually choosing a presidential candidate's preferred slate for their state.

If no candidate reaches the required 270 majority in the Electoral College, the president is chosen by the U.S. House of Representatives - currently controlled by Republicans.

According to US law, the Electoral College are required to cast their votes on the first Monday after the second Wednesday in December, or about six weeks of the election.

The result is to be reported to Congress on January 6 before the final result is officially announced. The new president will be sworn in on January 20.