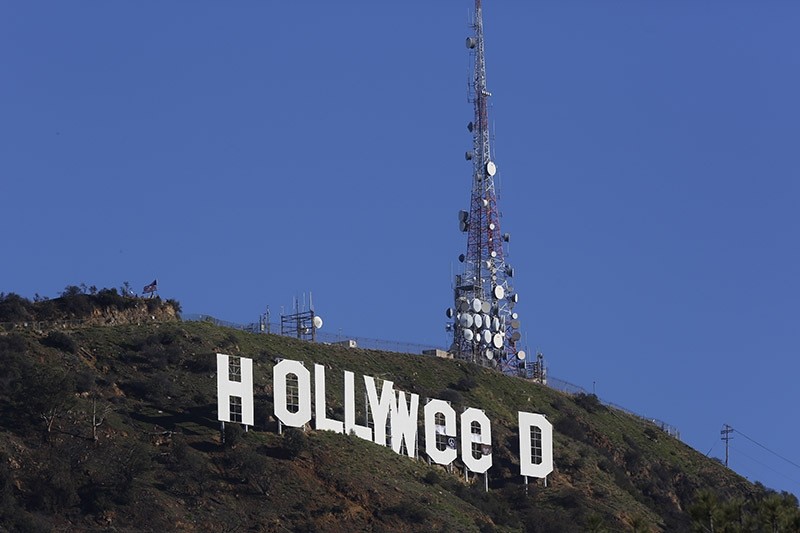 The famed Hollywood sign high in the hills over Los Angeles got a little higher on Sunday, when someone altered two of its letters to make it read "Hollyweed."

Police said unidentified thrill-seekers had climbed up and arranged tarps over the two letter "O's" to make them look like "E's," CBS affiliate KCAL reported.

Each letter is 45 feet (13.7 meters) high, so the feat would have required not just bravado but considerable athleticism.

A police spokesman said surveillance cameras might help them identify the culprit or culprits. There were no suspects, but the person if caught could be charged with misdemeanor trespassing, he said.

A ballot measure to make recreational marijuana legal for adults was easily approved by California voters on Nov. 8, opening the most populous U.S. state to the burgeoning commercial cannabis market, although the drug remains illegal under U.S. federal law.

Rapper Snoop Dogg, a noted cannabis consumer, tweeted a photo of the sign on Sunday and said: "#hollyweed - that's were I get my mail. #merryjane."

It was not the first such incident since the sign was first erected in 1923 -- at the time as "Hollywoodland" -- to advertise a local real estate development.

Perhaps not coincidentally, the same lettering change to the sign was made exactly 41 years ago, when a California law relaxing penalties for marijuana use took effect.

That alteration turned out to be the work of a college art student, one Danny Finegood.

Along with friends, he later returned to the sign on Easter Day 1976 to make it read "Holywood," and they changed it again in 1990 to read "Oil War" in protest of the Persian Gulf conflict.

Finegood's original handiwork, which he considered an act of environmental sculpture, was done for an art class project, the Los Angeles Times reported.

Using $50 in sheets and ropes, he and three friends made the change -- and Finegood received an "A" from his art teacher.

But while he might have inspired the latest act of hillside mischief, Finegood cannot be blamed for it. He died in 2007, aged 52.

Largely because of his work, however, Los Angeles officials increased security around the sign, installing a fence, alarms and eventually a closed-circuit surveillance system.

It is not clear how someone made it through those barriers Sunday, but Danny Finegood might well have admired their work.

The Hollywood sign remains a popular spot for hikers and tourists, who used to be able to walk up to the sign and take a picture. Now, a fence blocks people, and accessing the sign is difficult.

The famed vista with the Hollywood sign was nearly spoiled by development in 2010 until a conservation group, with donations from Playboy magazine founder Hugh Hefner and others, purchased adjacent land to save the view.

The sign originally read "Hollywoodland" and was created to promote a housing development. The last several letters deteriorated in the late 194