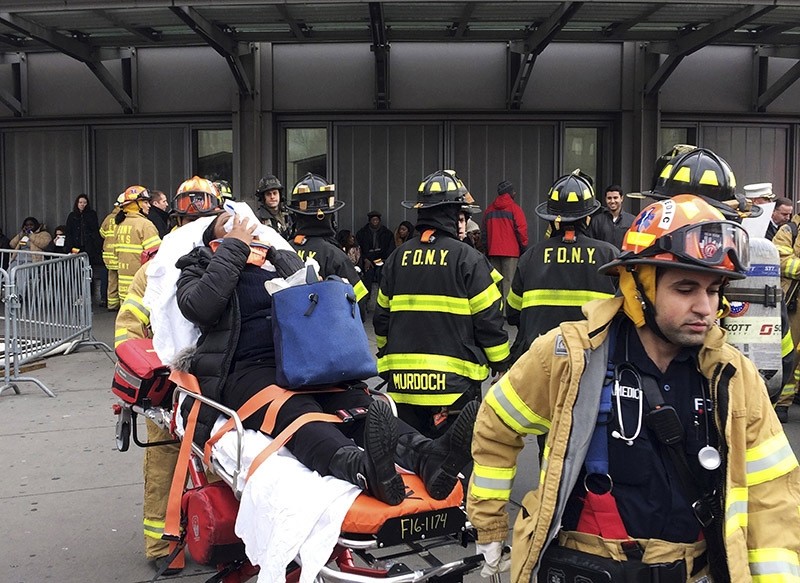 An injured passenger is taken from Atlantic Terminal in the Brooklyn borough of New York after a Long Island Rail Road train hit a bumping block, Wednesday, Jan. 4, 2017. (AP Photo)
by Compiled from Wire Services Jan 04, 2017 12:00 am

Passengers rushed out as smoke filled the tunnel. The impact bent the train's doors and smashed windows.

Some of the injured were brought out on stretchers.

Officials - visibly relieved the toll was not higher - said they were launching an investigation.

A fire department official said the train carried 500 to 600 people, and the first two train cars were seriously damaged.

"We were lucky, it could have been quite a bit worse," the official said.

At least 11 people were taken to hospital, and were unable to walk, he added.

The terminal is beneath a shopping mall in downtown Brooklyn, adjacent to the Barclays Center, home to Nets basketball, Islanders hockey and major concerts.

A similar accident across the harbor in Hoboken, New Jersey in September was much worse. There, a New Jersey Transit commuter train plowed off the end of a track, killing a woman standing in the station. Federal investigators are examining whether a more modern bumper or other barriers could have made a difference.

The train in Wednesday's wreck originated in the Far Rockaway section of Queens and was carrying around 450 people, officials said.

"I sort of slammed into the folks who were facing me," said Audrey Foster, who was sitting in the second car and hurt her side.

Foster said there were a lot of familiar faces on her daily commute, and many of those people were injured. "It's just sad," she said.

Metropolitan Transportation Authority Chairman Thomas Prendergast said there is "a signal system that controls it coming in at limited speeds. But when you're getting to the end it's the locomotive engineer's responsibility. And the train's brakes have to work. All those things have to be looked at in the investigation."