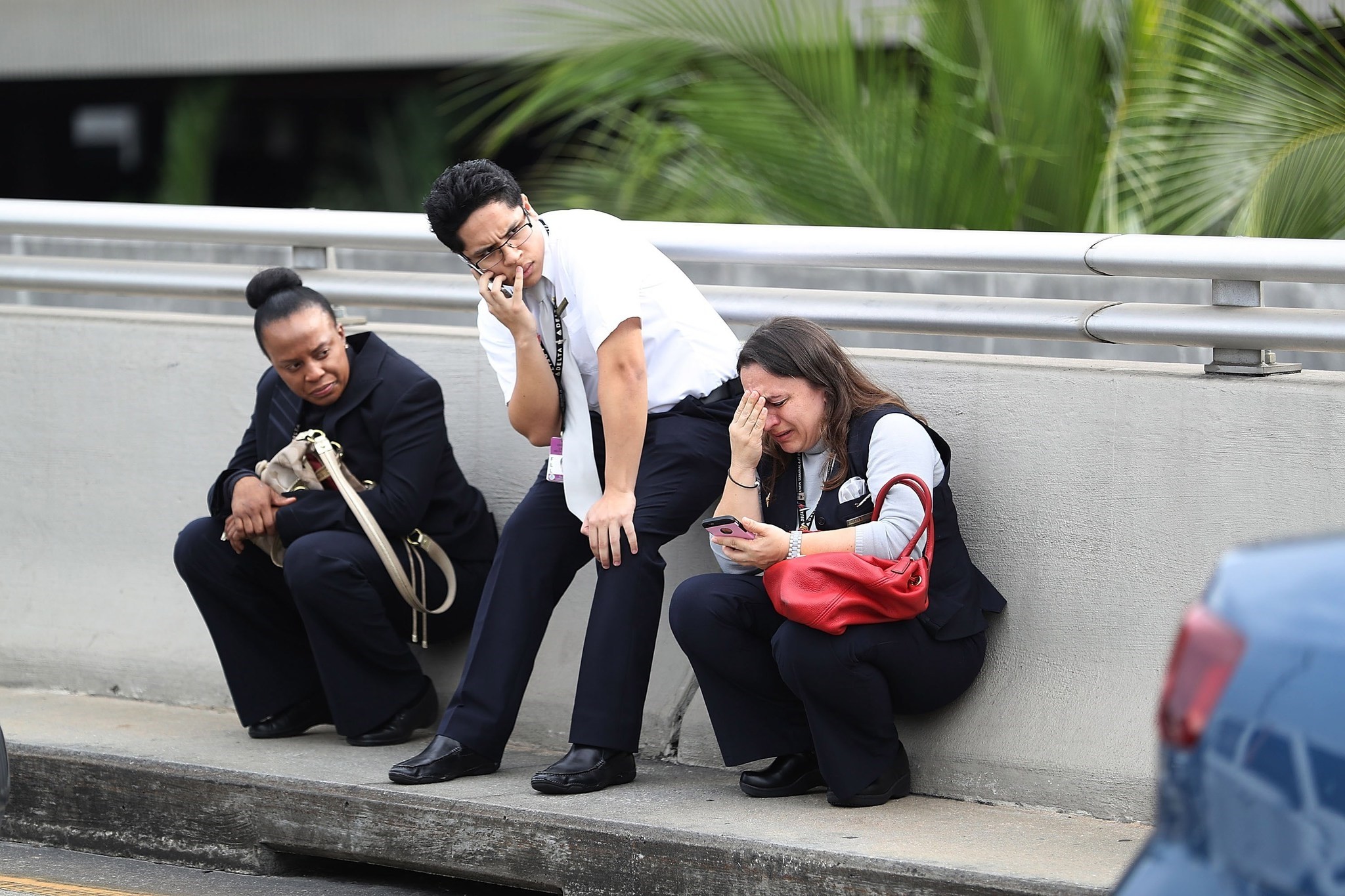 People take cover outsideTerminal 2 of Fort Lauderdale-Hollywood International airport after a shooting took place near the baggage claim on Jan. 6, 2017. (AFP Photo)
by Compiled from Wire Services Jan 06, 2017 12:00 am

A U.S. veteran, who served in Iraq, opened fire at a baggage carousel at Fort Lauderdale-Hollywood International Airport on Friday, killing five people before being taken into custody, officials and witnesses said.

Five people died and eight were wounded, Broward County Sheriff Scott Israel told reporters at the airport, where air traffic was shut down.

The gunman had arrived on a flight with a checked gun in his bag, Broward County Commissioner Chip LaMarca said on Twitter. The shooter claimed his bag and went to the bathroom to load the gun before coming out and firing, LaMarca said.

Cellphone video posted on social media showed victims on the floor next to a carousel, with people on their knees attempting to provide aid. At least two victims had pools of blood from apparent head wounds.

The shooter was unharmed as law enforcement officers never fired a shot, Israel said, adding it was too early to assign a motive.

He was taken into custody after throwing his empty weapon down and lying spread-eagle on the ground, one witness said.

"At this point, it looks like he acted alone," Israel said.

The gunman was identified as 26-year-old Esteban Santiago of Anchorage, Alaska, who served in Iraq with the National Guard but was demoted and discharged last year for unsatisfactory performance.

Santiago, who wore a "Star Wars" T-shirt, said nothing as he fired, witnesses told MSNBC. He appeared to use a 9 mm handgun, which he tossed aside upon running out of ammunition, surrendering to police, MSNBC reported.

The suspected gunman Esteban Santiago had a history of mental health problems — some of which followed his military service in Iraq — and was receiving psychological treatment at his home in Alaska, his relatives said Friday after the deadly shooting.

"Only thing I could tell you was when he came out of Iraq, he wasn't feeling too good," his uncle, Hernan Rivera, told The Record newspaper.

In November, Esteban told FBI agents in Alaska that the government was controlling his mind and was forcing him to watch Daesh terrorist group videos, a law enforcement official said. The official was not authorized to discuss an ongoing investigation by name and spoke Friday on condition of anonymity.

The FBI agents notified the police after the interview with Esteban Santiago, who took him in for a mental health evaluation.

Esteban Santiago was born in New Jersey but moved to Puerto Rico when he was 2, his brother said. He grew up in the southern coastal town of Penuelas before joining the Guard in 2007.

Since returning from Iraq, Santiago served in the Army Reserves and the Alaska National Guard in Anchorage. He was serving as a combat engineer in the Guard before his discharge for "unsatisfactory performance," said Lt. Col. Candis Olmstead, a spokeswoman. His military rank upon discharge was E3, private 1st class, and he worked one weekend a month with an additional 15 days of training yearly, Olmstead said.

She would not elaborate on his discharge, but the Pentagon said he went AWOL several times and was demoted and discharged.

Still, he'd had some successes during his military career, being awarded a number of medals and commendations including the Iraq Campaign Medal and the Global War on Terrorism Service Medal.

Santiago, who is in federal custody, will face federal charges and is expected to appear in court Monday, FBI Agent George Piro said.

It is legal for airline passengers to travel with guns and ammunition as long as the firearms are put in a checked bag — not a carry-on — and are unloaded and locked in a hard-sided container. Guns must be declared to the airline at check-in.

The bloodshed is likely to raise questions of whether aviation safety officials need to change the rules.

The attack also exposed another weak point in airport security: While travelers have to take off their shoes, put their carry-on luggage through X-ray machines and pass through metal detectors to reach the gates, many other sections of airports, such as ticket counters and baggage claim areas, are more lightly secured and more vulnerable to attack.

The Florida attack was the latest in a series of mass shootings that have plagued the United States in recent years, some inspired by terrorists, others carried out by loners or the mentally disturbed who have easy access to weapons under U.S. gun laws.

Nearly two months ago a former Southwest Airlines worker killed an employee of the company at Oklahoma City's airport in what police called a premeditated act.

The deadliest mass shooting in modern U.S. history took place last June, when a gunman apparently inspired by Daesh killed 53 people and wounded 49 at a gay nightclub in Orlando, Florida.

One of the most shocking was in 2012, when a man entered an elementary school in Newtown, Connecticut, and shot dead 20 first-graders and six adults.

Attackers have exploited security officials' focus on preventing attacks on airplanes rather than inside airports. In Western Europe and the United States, terminals are easily accessible public spaces.

But at Israel's Ben Gurion Airport, widely seen as a model for security, private companies trained by the national security agency use bomb-detectors, profile passengers and question travelers under the watch of police at the airport's entrance.