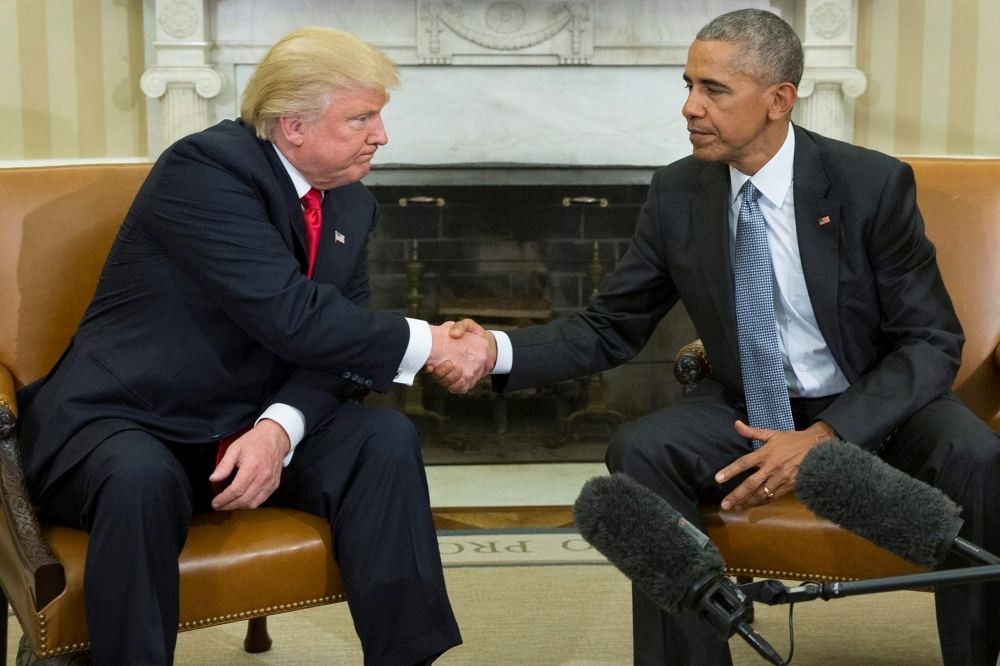 US President Barack Obama shakes hands with President-elect Donald Trump at the end of their meeting in the Oval Office of the White House in Washington.
by daily sabah
Jan 10, 2017 12:00 am

President Obama has once again criticized Donald Trump, saying he cannot run the White House like a 'family business,' that he needs to work together with the intelligence community and that Russian President Putin is not on the same team as them

Before handing over the executive power to President-elect Donald Trump on Jan. 20, President Barack Obama made a final push on key areas like Russia, foreign policy and intelligence agencies.

In an interview with George Stephanopoulos for ABC News Obama once again echoed his firm belief that there was Russian involvement in the U.S. election which gave Trump the presidency.

"I think that what is true is that the Russians intended to meddle and they meddled. And it could be another country in the future," President Obama said.

Obama went on saying, "One of the things that I've urged the president-elect to do is to develop a strong working relationship with the intelligence community."

"We have to remind ourselves we're on the same team. Vladimir Putin's not on our team," Obama added, citing the recent report by the Office of the Director of National Intelligence (ODNI) published on Jan. 6.

The report also claimed that Vladimir Putin himself ordered an "influence campaign" to subvert the U.S. election in favor of the then Republican nominee. These claims are escorted with other claims made recently that Russia swayed the Brexit last summer.

Obama went on to warn France and Germany, both of which have upcoming elections this year, to be weary of a "Russian hand" interfering in their political processes.

Obama also said he gave Trump advice on how to run his Twitter account, saying that the day Trump walks into the Oval Office there will be "world capitals and financial markets and people all around the world who take really seriously what he says."

He also commented that the White House cannot be run like a "family business," emphasizing that Trump needs to develop a strong working relationship with the various American intelligence services as well as create a strong working group around him in order to be successful.

These comments come after Trump's various criticisms of the intelligence community, mainly centered around the various, now disproven, allegations regarding weapons of mass destruction (WMDs) in Iraq in 2002 and 2003, which prompted the invasion of Iraq.

However Trump has also made a statement in which he praised the intelligence community, saying he has "tremendous respect" for them.

Trump also tweeted on Jan. 7 that, "Having a good relationship with Russia is a good thing, not a bad thing. Only 'stupid' people, or fools, would think that it is bad!"

Donald Trump's activities on social media have been discussed for close to two years now. With close to 20 million followers, some of his Tweets have been associated with financial market performance as well as political swings especially after he won the presidency on Nov. 9.

"You have to have respect for institutions and the process to make good decisions because you are inherently reliant on other folks," Obama added, referring to Trump's various criticisms and his picks for the U.S. government.