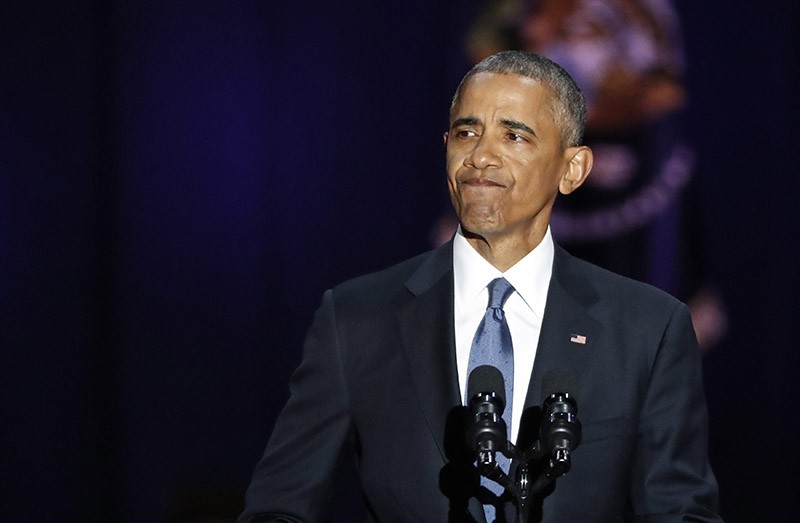 US President Barack Obama delivers his farewell address to the American people at McCormick Place in Chicago, Illinois, USA, 10 January 2017. (EPA Photo)
by Compiled from Wire Services Jan 11, 2017 12:00 am
U.S. President Barack Obama returned to his adopted hometown of Chicago on Tuesday to defend his legacy and urge Americans to protect democracy from challenges both at home and abroad, in his final public speech before he leaves office.

"Yes We Can. Yes We Did," he said, echoing the slogan of his 2008 presidential campaign, as he was joined on stage at McCormick Place by first lady Michelle Obama and elder daughter Malia, after delivering his final presidential address from the city where he launched his political career.

Obama drew a standing ovation even before his remarks had begun from a crowd of 18,000 Chicagoans, supporters, cabinet secretaries and White House staff.

The moment was bittersweet, as Obama reflected on eight years in office, pointing to economic accomplishments along with the legalization of same-sex marriage, the opening of diplomatic ties with Cuba and an international nuclear deal with Iran as developments that would have seemed unbelievable when he entered office in 2009.

Republican Donald Trump, who will take office after Obama on January 20, hopes to roll back many of those accomplishments and the crowd booed when Obama mentioned the impending power transition.

In his speech, Obama avoided directly criticizing Trump but denounced the divisiveness that has characterized U.S. politics and urged an inclusiveness that runs counter to much of Trump's rhetoric.

Attempts to divide Americans along with rancor and coarse political dialogue weaken the ties that bind the nation, he said.

"It's up to all of us to make sure we can meet the many challenges we still face," Obama said.

The United States contained great potential, Obama said, "but that potential will only be realized if our democracy works, only if our politics better reflects the decency of our people - only if all of us, regardless of party affiliation help restore the sense of common purpose we so badly need right now."

Obama, the first African American president, told supporters that his election had not defeated racism in the U.S., as many had hoped, with ongoing racial violence dividing the nation.

"Hearts must change," Obama said, quoting literary icon Atticus Finch from the classic novel To Kill a Mockingbird: "You never really understand a person until you consider things from his point of view ... until you climb into his skin and walk around in it."

Obama also warned against political polarization, saying Americans are increasingly isolating themselves with those who share similar political views and dismiss information that does not support their existing opinions.

"We rise or fall as one," Obama said. "Regardless of the station we occupy, we have to try harder to start with the premise that each of our fellow citizens loves this country just as much as we do."

The 55-year-old also turned his attention to international affairs in his speech, saying global order was being challenged not just by terrorists but also by "autocrats in foreign capitals."

These people "see free markets, open democracies, and civil society itself as a threat to their power," Obama said, echoing past characterizations he has made of Russian President Vladimir Putin.

"ISIL will try to kill innocent people. But they cannot defeat America unless we betray our Constitution and our principles in the fight," he said, in reference to Daesh.

"Rivals like Russia or China cannot match our influence around the world – unless we give up what we stand for, and turn ourselves into just another big country that bullies smaller neighbours."

Steeped in nostalgia, Obama's return to Chicago was less a triumphant homecoming than a bittersweet reunion bringing together loyalists and staffers, many of whom have long since left Obama's service, moved on to new careers and started families. They came from across the country — some on Air Force One, others on their own — to be present for the last major moment of Obama's presidency, AP reported.

After returning to Washington, he will have less than two weeks before he accompanies Trump in the presidential limousine to the Capitol for the new president's swearing-in. After nearly a decade in the spotlight, Obama will become a private citizen, an elder statesman at 55. He plans to take some time off, write a book — and immerse himself in a Democratic redistricting campaign.