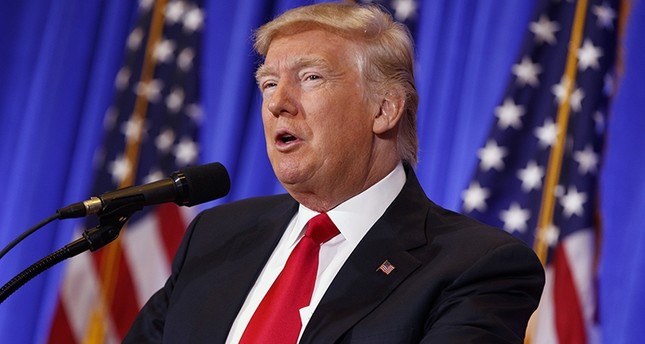 U.S. President-elect Donald Trump on Wednesday angrily denounced as disgraceful the publishing of claims he had been caught in a compromising position in Russia and said he hoped for a good relationship with Russian President Vladimir Putin but could not guarantee it.

"It's all fake news, it's phony stuff, it didn't happen," Trump said of a dossier that makes salacious claims about him.

Trump, who was briefed by U.S. intelligence officials about Russian hacking of the 2016 U.S. election, said it was disgraceful that information from that briefing had been made public and he denounced "sick people" who "put that crap together."

"It should never have entered paper," Trump said in a news conference days ahead of his inauguration. The Republican said U.S. intelligence agencies might have leaked the information.

Trump, who takes office on Jan. 20, acknowledged that Russia likely hacked the Democratic National Committee and the emails of other top Democrats during the election, but defended his goal of better ties with Moscow.

"If Putin likes Donald Trump, I consider that an asset, not a liability," Trump told about 250 reporters jammed into the lobby at his New York offices.

The dossier, which emerged late on Tuesday, was first reported by CNN. BuzzFeed published detailed elements of the report.

When a CNN reporter demanded to ask a question, Trump said "Not you. Your organization is terrible."

"I'm not going to give you a question. You are fake news," replied the president-elect.

Two U.S. officials said Tuesday evening that the allegations, which one called "unsubstantiated," were contained in a two-page memo appended to a report on Russian interference in the 2016 election that was presented last week to Trump and to President Barack Obama.

Regarding the Russian role in the election meddling, he said "Putin should not have been hacking, I don't believe he'll be doing it more."

The Republican president-elect has long said he hopes to improve ties with Moscow, but his plans have come under intense scrutiny after U.S. intelligence agencies concluded that Russia used cyber attacks and other tactics to try to tilt the presidential election in his favor over Democratic candidate Hillary Clinton.

His stance has rattled traditional U.S. allies such as NATO countries and many U.S. foreign policy experts who consider Russia a geopolitical adversary.

About a dozen protesters gathered behind a police barricade across the street from Trump Tower, holding signs with slogans like "Dump Trump" and "Allegiance To America Not Russia" as Fifth Avenue traffic streamed by.

At the other end of the block, a separate group of protesters held signs with Trump sporting a Hitler mustache, and chanted, "In the name of humanity, we refuse to accept a fascist America!"

The Russia news obscured what was the original purpose of the news conference: a chance for the real estate developer to describe how he will separate himself from his global business operations to avoid conflicts of interest once he takes office.

The President-elect also touched upon the wall between Mexico and the U.S. that he pledged before the elections.

"I could wait about a year and a half until we finish our negotiations with Mexico which will start immediately after we get into office, but I don't want to wait," he told the news conference.

He also said his vice president-elect Mike Pence is "leading an effort to get final approvals through various agencies and through Congress for the wall to begin."

"Mexico in some form ... will reimburse us," Trump added.

Another of his pledges was to support companies keeping businesses inside the U.S.

Trump warned U.S. companies that if they move production offshore their products will face substantial taxes when they are imported into the country.

"There will be a major border tax on these companies that are leaving and getting away with murder."

The president-elect also stated that his replacement for 'Obamacare' will be offered 'essentially simultaneously' with confirmation from the health secretary.

"Obamacare is a total and complete disaster; we will repeal it immediately," he said.

Trump, who owns hotels and golf courses as well as assets like a winery and modeling agency, will transfer all his assets into a trust and put his two sons in charge, hiring an ethics adviser to review any transactions for conflicts, a Trump lawyer told reporters on Wednesday.

The company will not enter any new deals while Trump is president, and all profits generated at Trump's hotels by foreign governments will be donated to the U.S. Treasury, the lawyer said.

His daughter Ivanka, whose husband Jared Kushner will be a senior adviser to Trump in the White House, also will cease her management role in the Trump Organization, the lawyer said.