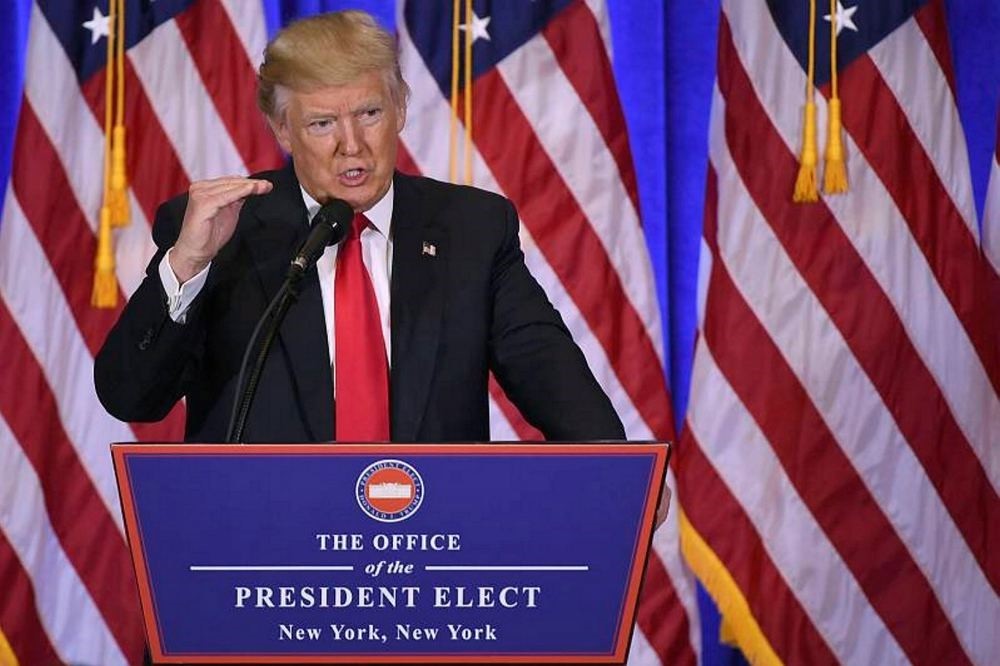 US President-elect Donald Trump answers journalists' questions during a press conference on Jan. 11 in New York.
by Compiled from Wire Services Jan 13, 2017 12:00 am

Just over a week before taking office, President-elect Donald Trump attacked U.S. intelligence agencies and the media as he denied explosive allegations about his ties to Russia

President-elect Donald Trump escalated a fight with U.S. spy agencies on Wednesday, just nine days before he takes over their command as president, and accused them of practices reminiscent of Nazi Germany.

The Republican said leaks from the intelligence community led to some U.S. media outlets reporting unsubstantiated claims that he was caught in a compromising position in Russia.

"I think it was disgraceful, disgraceful that the intelligence agencies allowed any information that turned out to be so false and fake out. I think it's a disgrace, and I say that ... that's something that Nazi Germany would have done and did do," Trump told a news conference in New York.

Trump acknowledged for the first time that Russia likely hacked the Democratic National Committee and the emails of top Democrats during the 2016 presidential election. "I think it was Russia," he said, pointing out that other countries were also hacking the United States.

Trump's comments about spy agencies such as the CIA are likely to intensify tensions between the intelligence community and the president-elect, who initially disparaged its conclusion that a Russian hacking campaign was aimed at boosting his candidacy against Democrat Hillary Clinton.

Trump, who takes office on Jan. 20, called a dossier that makes salacious claims about him in Russia "fake news" and "phony stuff."

U.S. Director of National Intelligence James Clapper said he spoke with Trump on Wednesday evening and told the president-elect he did not believe the media leaks came from the intelligence community.

"I expressed my profound dismay at the leaks that have been appearing in the press, and we both agreed that they are extremely corrosive and damaging to our national security," Clapper said in a statement.

He defended including the dossier in the intelligence report Trump received on Friday, saying "part of our obligation is to ensure that policymakers are provided with the fullest possible picture of any matters that might affect national security."

Clapper said he emphasized to Trump that the dossier was not produced by the U.S. intelligence community and intelligence officials have not judged whether the information is reliable.

Kremlin hopes Putin, Trump will get along well

The Kremlin says Russia and the United States can overcome the current diplomatic strain based on mutual respect once President-elect Donald Trump takes office.

President Vladimir Putin's spokesman, Dmitry Peskov, told reporters yesterday that "Moscow hopes that our presidents will get along well." He added that while Moscow and Washington can't agree on everything, they can normalize their strained ties if they show "mutual respect."

Peskov made the statement while commenting on Trump's news conference Wednesday, during which he voiced hope of getting along with Putin. Peskov welcomed Trump's readiness to conduct a dialogue with Russia, adding that "it will help us find a way from many difficult situations." Peskov also reaffirmed a strong denial of any meddling in the U.S. election. Trump will take office on Jan. 20.
RELATED TOPICS