What Barack Obama and Donald Trump have said about each other 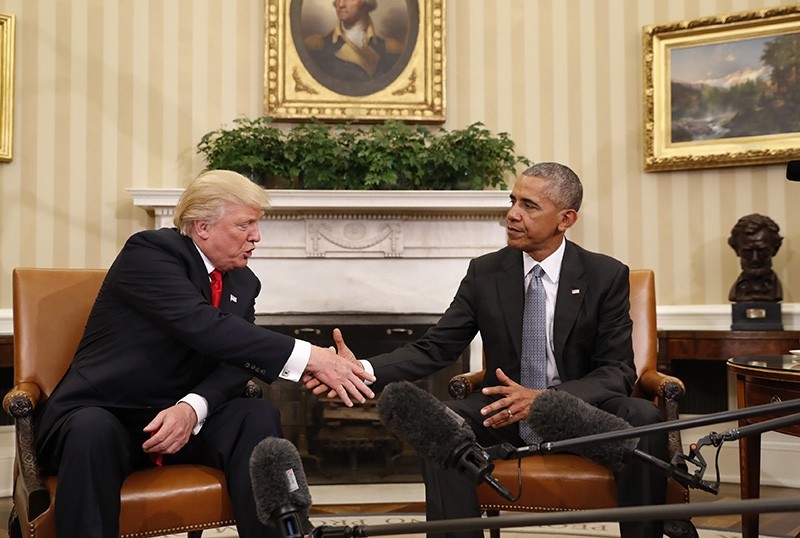 Barack Obama passes the reins of the U.S. power to Donald Trump on Friday.

Since Trump's election victory in November, the Republican billionaire and the outgoing Democratic president have tried to turn the page on the harsh language used during the election campaign with mixed success.

Here are some quotes from Obama on Trump, and from Trump on Obama:

"I continue to believe Mr. Trump will not be president, and the reason is because I have a lot of faith in the American people, and I think they recognize that being president is a serious job."

"Demeaning women, degrading women, but also minorities, immigrants, people of other faiths, mocking the disabled, insulting our troops, insulting our veterans. That tells you a couple things. It tells you that he is insecure enough that he pumps himself up by putting other people down. Not a character trait that I would advise for somebody in the Oval Office."

"He clearly was able to tap into a lot of grievances. And he has a talent for making a connection with his supporters that overrode some of the traditional benchmarks of how you'd run a campaign or conduct yourself as a presidential candidate."

"I think everybody has to acknowledge -- don't underestimate the guy, because he's going to be 45th president of the United States. The one thing I've said to him directly... is just make sure that as we go forward certain norms, certain institutional traditions don't get eroded, because there's a reason they're in place."

"I think President Obama has been the most ignorant president in our history. (...) He has been a disaster as a president. He will go down as one of the worst presidents in the history of our country."

"President Barack Obama was born in the United States, period."

- September 10, 2016 in Washington, admitting for the first time that the Democratic leader was not born abroad and thus was an illegitimate leader -- a conspiracy theory Trump had fueled for at least five years

- November 10, 2016 on Twitter after a post-election visit to the White House

"Doing my best to disregard the many inflammatory President O statements and roadblocks. Thought it was going to be a smooth transition - NOT!"