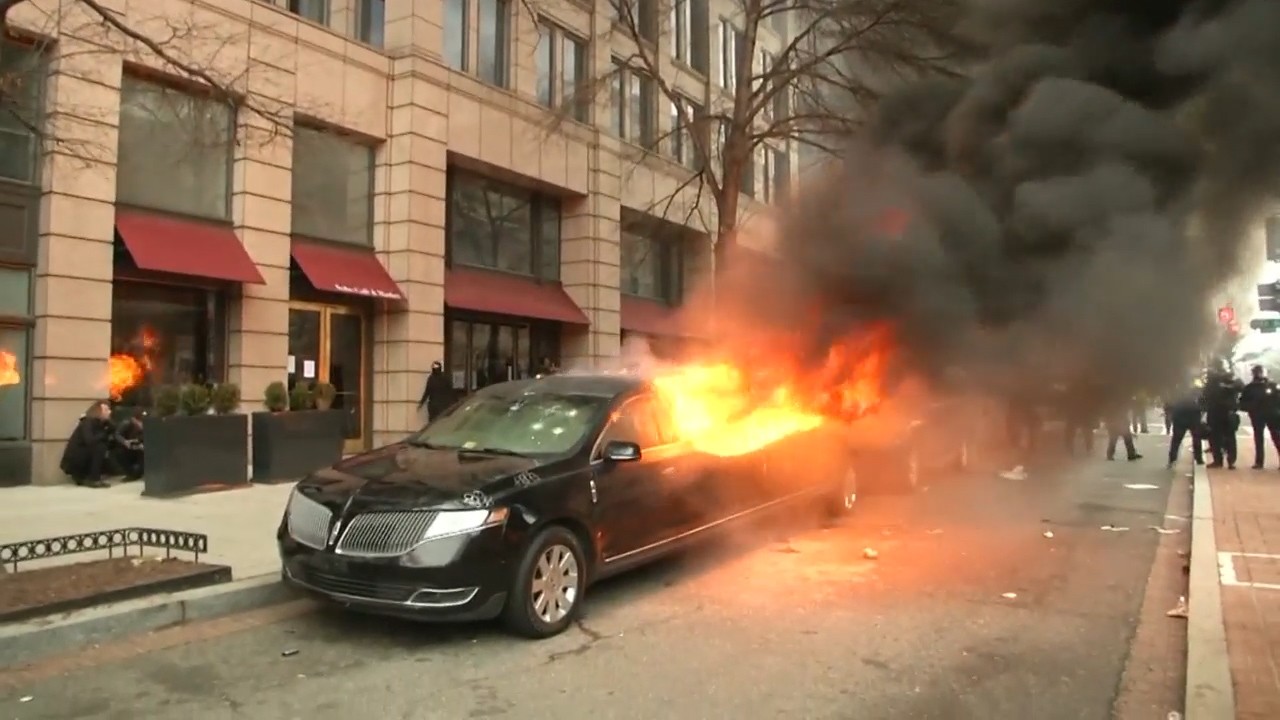 Washington police arrested at least 217 people for acts of vandalism committed on the fringe of peaceful citywide demonstrations against Trump's inauguration.

Just before the parade started, clashes broke out between 400 to 500 stone-throwing protesters and riot police, who responded with tear gas -- the second violent flare-up in the space of a few hours.

As Trump's motorcade wound its way up Pennsylvania Avenue in the parade to the White House, protesters just a few blocks away set a parked limousine on fire after smashing its windows.

City police chief Peter Newsham said at least 217 people were arrested and would be held overnight before appearing in front of a judge.

"The charge is rioting," he told reporters.

"Our intention going into this event was to make zero arrests, and unfortunately they forced our hand."

Meanwhile, prominent white supremacist Richard Spencer was sucker-punched in the street while giving an interview to journalists, according to footage of the incident circulating online.

"No serious damage," Spencer said on Twitter. "I can take a punch."

As the 70-year-old Trump, his supporters and top dignitaries gathered on the National Mall for the swearing-in ceremony, throngs of his opponents also converged on the US capital.

Most of the noisy protests -- including those by an array of anti-racist, anti-war, feminist, LGBT, pro-immigration and marijuana legalization groups -- were peaceful.

But the protesters were intent on being heard -- massing at the city's Navy Memorial Plaza, along the parade route, and letting out a deafening roar as the presidential limousine known as "The Beast" drove by.

"Not my president!" they yelled, as the pro-Trump crowd in bleachers across the street chanted "USA!"

Another group unfurled a giant banner reading "Shame" outside the Trump Hotel -- right near the spot where the president briefly stepped out of his limo to walk the parade route.

Newsham attributed the sporadic outbreaks of violence to "a small group that wanted to disrupt the inauguration."

"We have significant damage in a number of blocks in our city," he said, while adding: "It's a very, very small percentage of those folks who came here to peacefully assemble in our city."

Black-clad groups with anarchist and anti-fascist banners could be seen moving quickly on the outskirts of the main protests.

Marchers, some red-eyed from pepper spray, chanted: "No deportation, no KKK, no fascist USA!"

Several demonstrators were carrying batons and other weapons, police said, while at least one protester was hurt and was seen receiving treatment for a head wound.

The front windows of some businesses including a Starbucks and a Bank of America were smashed to pieces.

The majority of protests in the city were peaceful -- whether people came to register anger, dissent or dismay at Trump's election victory over Democrat Hillary Clinton.

Some insults were thrown as groups of Trump supporters passed by protests en route to hail their hero, but the two sides kept largely apart.

Protesters said they feared Trump would be an extremist president, taking a hardline approach on everything from immigration to gutting public services.

John Zangas, a longtime Washington resident, said it felt like the city was "under siege" given the number of police on the streets.

"This should be a momentous occasion, not one where flash-bang (noise grenades) and tear gas are deployed against citizens," Zangas said.

Demonstrations were not limited to the nation's capital, with protestors taking to the streets in cities including Chicago, New York and Atlanta.

Julie Vogl, 54, voiced concern over the president's calls to ban Muslim's from entering the country and deport undocumented immigrants.

"I hope he proves me terribly wrong," she said. "We don't believe in what he said."

"It's not the nation we want."