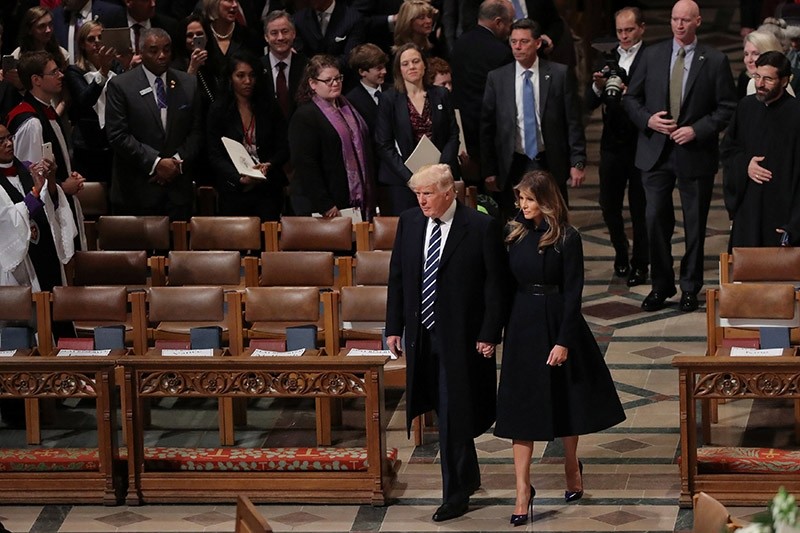 On the first full day as U.S. president, Donald Trump headed to CIA headquarters on Saturday, signaling an effort to mend fences after he slammed spy agencies for their investigation into Russian hacking during the presidential election.

"@POTUS to visit @CIA this afternoon. Event is over capacity at 300+ Excited to thank the men and women of the intelligence community," White House spokesman Sean Spicer announced earlier on Twitter.

Addressing about 400 CIA employees at their headquarters in Langley, Trump told the workers that they are really special and amazing people saying "I am so behind you."

Trump, who engaged in an unprecedented feud with the CIA and other U.S. intelligence agencies before his inauguration, is expected to thank agencies, but some analysts said it will take more than a quick visit to patch up relations with a community he has compared to using tactics reminiscent of Nazi Germany.

He has sharply criticized top U.S. intelligence officials over their conclusions that Russia interfered in the 2016 election on his behalf, as well as over leaks about classified briefings he received in the weeks before his he was sworn into office on Friday.

Trump's attitude drew an unusual public rebuke from outgoing CIA Director John Brennan and raised fears about the impact that sagging morale at the agencies could have on U.S. security.

Will take time to heal

But others said it may take time to forgive and forget.

"A single visit with some nice words will not outweigh prior attacks and insults," said Paul Pillar, a former top U.S. intelligence analyst on the Middle East.

"If today is the last they see of the president for weeks or months, the work force will not be favorably impressed," he said.

Within the 17-agency intelligence community, there are widely shared concerns about the qualifications and judgment of Trump, a businessman and television star who has never held public office.

Some veteran analysts who have spent their careers studying foreign dictators and autocrats have said they are troubled by Trump's style, saying his negativity, egotism, and appeals to nationalism are hallmarks of autocratic regimes.

"Many people are asking whether we can serve under a president and national security adviser who've expressed such contempt for the intelligence community, and one photo opportunity drive-by on a Saturday is not going to change that," said a veteran officer now working at CIA headquarters after multiple assignments overseas, who spoke on condition of anonymity.

"It will be interesting to see how many people leave their houses and jump in their cars to drive to headquarters on their day off to make the crowd look bigger for someone who's compared them to Nazis," said a second serving intelligence officer.

Trump, who has said he wants to try to work with Moscow to fight Daesh terrorists and reduce stockpiles of nuclear weapons, has since accepted the conclusions of the election hacking investigation.

Trump had originally hoped to swear in his new CIA chief during the visit to the spy agency. But the Senate has not yet confirmed his pick, Kansas Republican Representative Mike Pompeo, for the job. That vote is expected on Monday.

Putin is ready to meet Trump but a meeting would take months to prepare, Kremlin spokesman Dmitry Peskov was quoted as saying by TASS news agency.

"This will not be in coming weeks, let's hope for the best - that the meeting will happen in the coming months," Peskov told BBC, according to TASS.

No time to waste

In a long day of pomp and ceremony on Friday, Trump - a real estate mogul who has never held office - was officially sworn in as the 45th U.S. president, and celebrated with his family at three balls late into the night.

But he squeezed in a hastily arranged Oval Office ceremony to sign an order to weaken Obamacare, using his first hours in the White House to make good on a campaign promise to start dismantling his predecessor's healthcare law.

Trump won his campaign with an often-angry anti-establishment pledge to crack down on illegal immigration and protect U.S. jobs, but his upstart message sparked a series of protests around the world.

On Saturday, large crowds of women, many wearing bright pink knit hats, poured into downtown Washington for a march on the National Mall, which was filled with Trump supporters only a day earlier.

He began the day by attending the National Prayer Service, an interfaith service traditionally held the morning after inauguration.

Trump's motorcade weaved past handfuls of protesters as well as supporters as it drove to and from the National Cathedral. One jogger along the route lifted both of his middle fingers as he was running.

Near the White House people held signs including "Hate does not make America great" and "Women's rights are human rights."