Trump says he has 'running war with media' in CIA speech 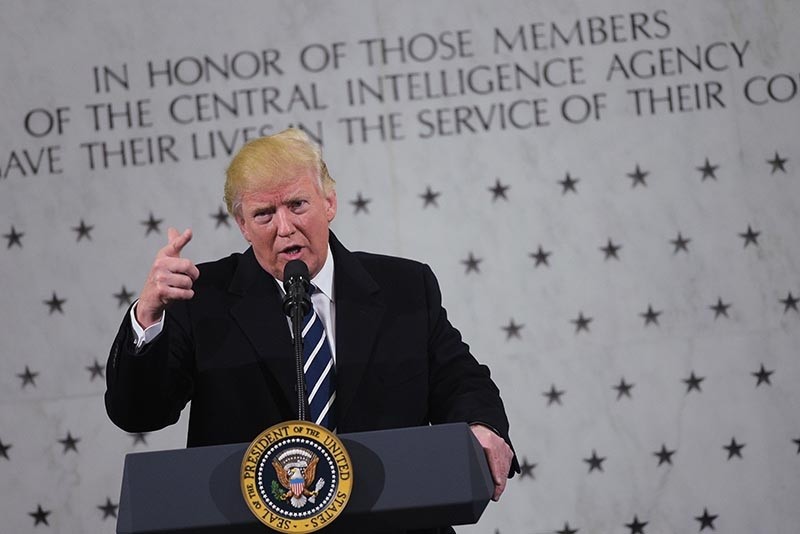 On his first full day in office, President Donald Trump berated the media over its coverage of his inauguration, saying that he has a 'running war' with the media, calling journalists the 'most dishonest human beings on Earth.' Trump turned a bridge-building first visit to CIA headquarters into an airing of grievances about "dishonest" journalists, but it was the president who spread inaccuracies about the size of the crowds at his swearing in, AP reported.

Standing in front of a memorial for fallen CIA agents, Trump assured intelligence officials, "I am so behind you." He made no mention of his repeated criticism of the intelligence agencies following the election, including his public challenges of their high-confidence assessment that Russia meddled in the White House race to help him win.

"There is nobody that feels stronger about the intelligence community and CIA than Donald Trump," he said, blaming any suggestion of a "feud" on the media.

Trump's decision to travel to CIA headquarters so quickly after taking office was seen as an attempt at a fresh start with the intelligence agencies he will now rely on for guidance as he makes weighty national security decisions. Following his private meeting with top CIA leaders, Trump said the U.S. had been "restrained" in its efforts to combat terrorism, calling the threat "a level of evil we haven't seen."

But in unscripted, stream-of-consciousness remarks, Trump appeared more focused on settling scores with the media.

He defensively touted the crowd size for his swearing-in ceremony, wrongly claiming that the throngs on the National Mall stretched "all the way back to the Washington Monument." Photos and video clearly showed the crowd stopping well short of the landmark.

Trump's visit took place as throngs of women, many of them wearing bright pink, pointy-eared hats, descended on the nation's capital and other cities around the world for marches organized to push back against the new president. Hundreds of protesters lined the motorcade route as Trump sped back to the White House, many screaming and chanting at the president.