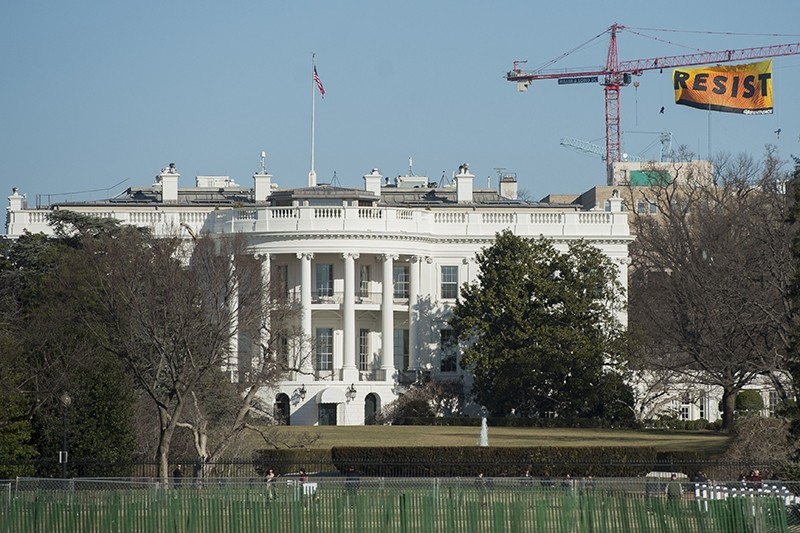 Greenpeace protesters unfold a banner reading ,Resist, from atop a construction crane behind the White House January 25, 2017 in Washington, DC. (AFP Photo)
by French Press Agency - AFP
Jan 25, 2017 12:00 am

Greenpeace activists unfurled a large banner with the word "Resist" from a construction crane blocks from the White House Wednesday to protest against President Donald Trump.

The environmental group said on its Facebook page that the gesture targets what it called Trump's climate denial, racism, misogyny, homophobia, and bigotry.

Seven activists clambered up the crane and hung from it the 70-foot by 35-foot (20 meter by 10 meter) banner with "Resist" in red against a yellow background.

They remained up there as of mid-morning, Greenpeace said.

The banner was visible from the White House residence.

"People in this country are ready to resist and rise up in ways they have never done before," said Greenpeace Inc. Board chair Karen Topakian.

"While Trump's disdain and disrespect for our democratic institutions scare me, I am so inspired by the multigenerational movement of progress that is growing in every state. Greenpeace has used nonviolence to resist tyrannical bullies since 1971, and we're not going to stop now," Topakian added.

"The sun has risen this morning on a new America, but it isn't Donald Trump's," said Pearl Robinson, one of the activists who unfurled the banner.

"I fear not only the policies of the incoming administration, but also the people emboldened by this election to commit acts of violence and hate. Now is the time to resist," Robinson said.