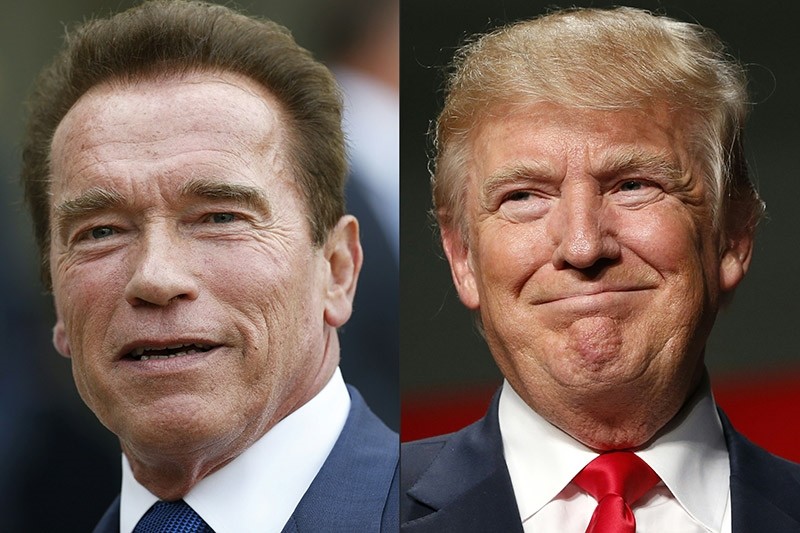 This file combination of pictures created on January 6, 2017 shows recent pictures of US actor and former governor of California Arnold Schwarzenegger (L) and US President Elect Donald Trump. (AFP Photo)
by Associated Press Feb 03, 2017 12:00 am

In an early morning Twitter post Friday, U.S. President Donald Trump kept alive a theme he brought up a day earlier during his first appearance at the National Prayer Breakfast saying Arnold Schwarzenegger "tried hard" to make "Celebrity Apprentice" a success, but has failed.

Trump said in his tweet, "Yes, Arnold Schwarzenegger did a really bad job as Governor of California and even worse on the Apprentice ... but at least he tried hard!"

Trump previously sought prayers Thursday for Arnold Schwarzenegger over ratings for "Celebrity Apprentice" — the show Trump once hosted and which he said has become a "total disaster" since California's Republican former governor took over the franchise.

The president harkened back to his days as a reality TV sensation during an address to the National Prayer Breakfast.

"When I ran for president, I had to leave the show," Trump told the audience of more than 2,000 people. "They hired a big, big movie star, Arnold Schwarzenegger, to take my place. And we know how that turned out. The ratings went right down the tubes."

"It's been a total disaster, and Mark will never, ever bet against Trump again," the president said, referring to Mark Burnett, the show's producer and longtime supporter of and participant in the annual breakfast. "I want to just pray for Arnold if we can." Burnett introduced Trump to the audience.

Schwarzenegger responded quickly in a brief video on his Twitter account, in which he suggests that Trump switch jobs with him.

"You take over TV because you're such an expert in ratings," the "Terminator" star says in the video, captioned "The National Prayer Breakfast?" ''And I take over your job and then people can finally sleep comfortably again. Hmm?"

Schwarzenegger's premiere night audience for his early January debut as the show's host was a disappointing 5 million viewers, according to the Nielsen Company. Viewership dropped to 3.9 million viewers in the second week.

The back-and-forth between the president and his reality TV show successor had the feel of a WrestleMania "feud" meant to drive up audience interest — and ratings. White House spokesman Sean Spicer said later Thursday that Trump was just trying to have a "light-hearted moment" with a personal friend.

Trump, who helped conceive and build the "Apprentice" franchise with Burnett, retains a financial stake in those TV shows and is listed as an executive producer.

Trump has said it's a courtesy title for which he is doing no work. He has not detailed how much money he's making from this season.

Financial disclosures Trump filed during the campaign show his company, Trump Productions, earned about $5.9 million from "The Apprentice" shows in 2015.